That seems to be the tactic brands are starting to take in response to parody social media accounts.

In August, Harrison McNeill, the teen behind popular Twitter handle @goodbeanjokes, was hired by Bush’s Beans. And while Arby’s hasn’t hired Brendan Kelly, owner of satirical Twitter account Nihilist Arby's, the two have a civil relationship.

But is it worth it to hire a superfan (or superbully — depending on what lens you view the content from)? Yes, according to Slim Jim.

In other words, the content was as dry as the dried sausages it was trying to sell to consumers.

"Our Instagram content was attempting to be funny and gain attention, but it missed the mark," he said. "Consumers felt like they were being marketed to and it was contrived."

Then, in the fall of 2018, Slim Jim staffers noted that an account on Instagram, @SlimJimsDoingThings, had 15,000 followers.

Meanwhile, Slim Jim had only 5,000 followers.

The fan account was manned by Andy Hines, as a hobby. It targeted Slim Jim using an "irreverent voice and meme culture" to get a conversation going, explained Fivelson.

"We wondered: How is this account doing this? They are not paying for this and they have three-times as many followers as we do," said Fivelson. "We noticed the content was really funny. It was connecting with a unique voice and fans were responding to it."

In September 2018, Hines posted a meme to his Instagram page with the text, "Me realizing I have more followers than the actual Slim Jim page and they still won't hire me as director of marketing."

Soon after Hines’ post, Slim Jim invited him to a pop-up event at Washington, DC, restaurant Chiko, where the snack was being integrated throughout the menu.

"He came out and we loved him and his energy," said Fivelson. "Rather than saying cease and desist, he joined our agency BIOS as content manager."

BIOS handles social media and real-time listening for the snack brand. Hines has no previous experience managing social media for a brand.

But, unofficially, Slim Jim gave Hines the tongue-in-cheek title of "chief doing things officer" for the brand. Hines then started managing Slim Jim’s social media pages and even appeared in some of the brand’s posts. 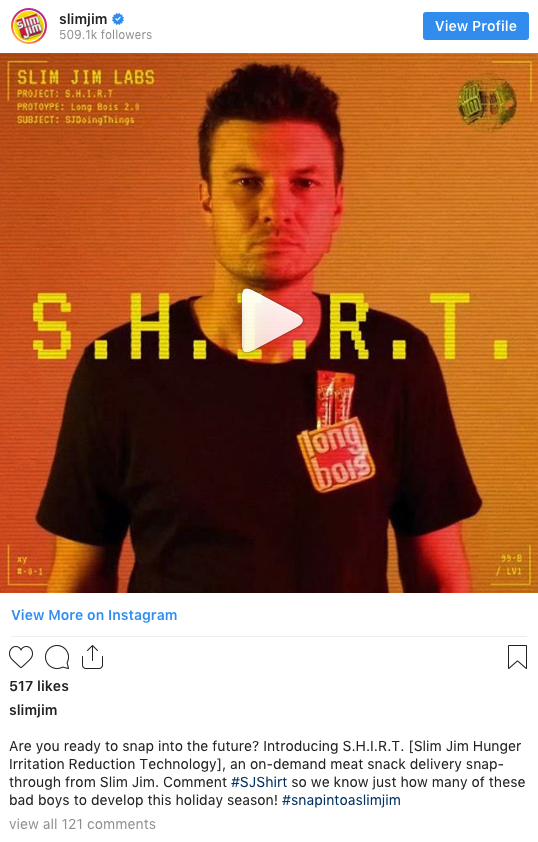 "The reason why @SlimJimsDoingThings was so interesting was because of the funny and witty content that appealed to the social community in a voice that made you want to engage," said Fivelson. "His posts did that in a way that didn’t take itself too seriously."

The "culture" Hines’ posts created under his personal handle have now transitioned and been adopted into the Slim Jim handle. Hines and Slim Jim worked through a social strategy that included a steady diet of quirky memes that has sparked unprecedented engagement and growth for the brand on Instagram. 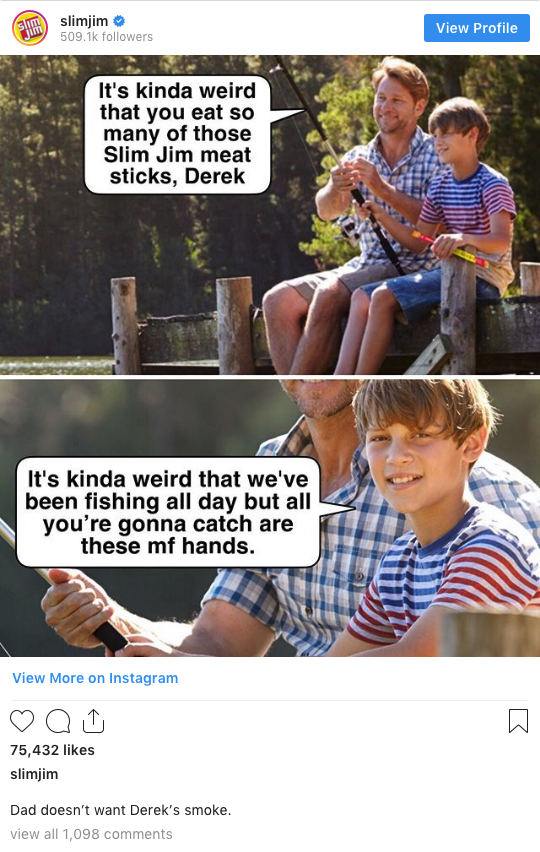 Hines has created a sense of community through his vocabulary and narrative, which consumers love, Fivelson said. For example, he has coined the nickname "Long Bois" for Slim Jims and fans are part of the "Long Boi Gang."

The Long Boi Gang has become such a part of Slim Jim culture, this fall they're being recognized with their own limited edition Long Boi Stick. The brand also recently posted polls giving them options for upcoming merchandise and will end up producing the gang’s most popular choice.

"The gang owns and influences the content," said Fivelson. "They tell us what to do and we do what we can to make them happy."

He added that the Long Boi Gang has resonated so broadly that even Slim Jim retailers are talking about it.

Fivelson noted that a big lesson learned from working with Hines is that consumers don’t want a brand selling products to them on Instagram. They just want Slim Jim to "cure their boredom."

"That meant leveraging memes and celebrating the Long Boi Gang through all the things that culture represents," said Fivelson.

As Slim Jim’s follower count has ticked up, the brand has created mutually beneficial relationships with other popular Instagram accounts, or what the brand has dubbed "Slimfluencers," such as @JustAConstructionGuy and @TheHiddenBiscuit.

"They support us and we support them," said Fivelson. "That is how we are getting fantastic, organic impressions."

Hines, who continues to work at BIOS, is no longer a "front man," in terms of Slim Jim’s social presence, said Fivelson. However, his work and the strategy are infused into "this meme culture-based approach we have adopted over the last year," he said.

"The brand is growing at the fastest rate it has grown in over five years," said Fivelson. "We crossed the $600 million mark from a retail sales perspective, according to IRI data, and we are gaining market share."