A new industry study on the mental wellbeing of the PR industry makes grim reading.

In a poll of 400 practitioners (300 from agencies, 100 in-house), 89 per cent say they "have struggled with their mental wellbeing" and the mental wellbeing score of 44.6 is below the UK average of 46.2. This measure is based on the Warwick-Edinburgh Mental Wellbeing Scale.

In a similar but larger study, which PRWeek and the PRCA released in January, 60 per cent of professionals had been diagnosed with a mental health condition.

It indicates, proportionally, that three in ten employees who are struggling with their mental health are not seeking medical help.

The latest study, which has been released on World Mental Health Day, found 31 per cent of PR professionals find their job ‘very stressful’ and 59 per cent (versus a 30 per cent UK average) say the major cause of stress is their workload.

Workload (43 per cent) was cited as the main reason why PR professionals do not take time off work. 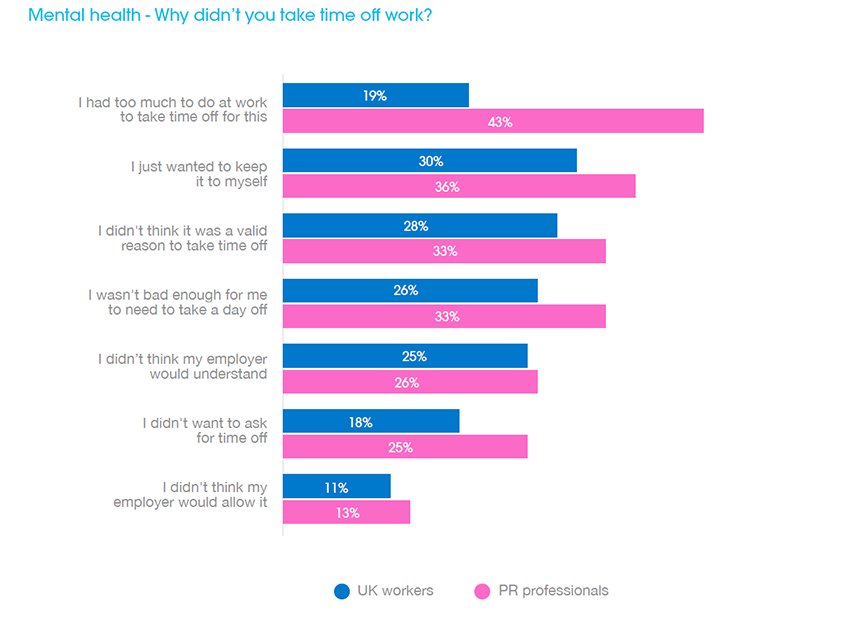 In the PRWeek study earlier this year, about half of PR professionals believe they are under more stress now than they were a year ago, while another study found that more than a quarter (27 per cent) of employees work overtime on a daily basis.

These studies clearly indicate that this industry has a problem managing staff working patterns and that it is contributing to far too many employees’ poor mental health.

On a positive note, 44 per cent of PR professionals feel they can talk about their mental health issues with colleagues, which is better than the 40 per cent national average.

"While it’s encouraging to see more practitioners discussing mental health with colleagues, far too many of our colleagues are still suffering. For too long, our industry has tiptoed around this issue, but we now have an opportunity to take action and create meaningful change.

"Attitudes are changing. Conversations are starting. Let’s now enact the recommendations of this report to create tangible change for the future of our workforce."

"When three in ten PR professionals who struggle with their mental health tell us that they avoid telling people for fear it might jeopardise their career (versus a fifth of the general workforce), there is a serious problem," he said.

"Addressing mental wellbeing at work may seem like a mammoth task, but it’s a journey, and taking that first step in the right direction will kick-start wider organisational change which will benefit everyone involved."

Check out the full Opening the Conversation: Mental Wellbeing in Public Relations study.

How to help a colleague struggling with their mental health