Last week, the ASA ruled that a Burger King tweet was "irresponsible" and condoned antisocial behaviour.

The ASA said 24 people complained it was irresponsible and offensive because they believed it encouraged violence and anti-social behaviour.

The tweet (below) was posted the day after a McDonald's outlet in Edinburgh put up a sign to say that it would not be selling milkshakes or ice cream by "police request".

The ASA said that although it recognised the tweet was "humourous" and intended as a follow-up to rival McDonald’s announcing it wouldn’t sell milkshakes: "the context in which it appeared we considered it would be understood as suggesting that Burger King milkshakes could be used instead by people to 'milkshake' Nigel Farage."

Burger King said it did not endorse violence, and followed-up with a tweet reading: "We'd never endorse violence - or wasting our delicious milkshakes! So enjoy the weekend and please drink responsibly people."

Taylor Herring founder and CEO James Herring describe the ASA’s ruling as "rather petty" and questioned why the ASA isn’t focused on other political advertising concerns.

"Context is everything and Burger King’s twitter feed is witty and humorous," Herring told PRWeek. "The offending tweet tapped into a meme, was obviously tongue-in-cheek".

"Just 24 people complained. Do the ASA not have anything better to do? When is the Brexit bus ad being dealt with? Or those offensive anti-migrant posters?

"Someone needs to take control of political adverts that are misleading, harmful or offensive."

He added: "Meanwhile,  I’m sure Burger King HQ are loving all the continued free promo for their milkshake range."

In response, the ASA told PRWeek that it does not regulate political ads and that its remit is to make sure ads are responsible.

"Under our rules, this ad was a problem as we considered it encouraged or condoned anti-social behaviour," a spokesperson said. 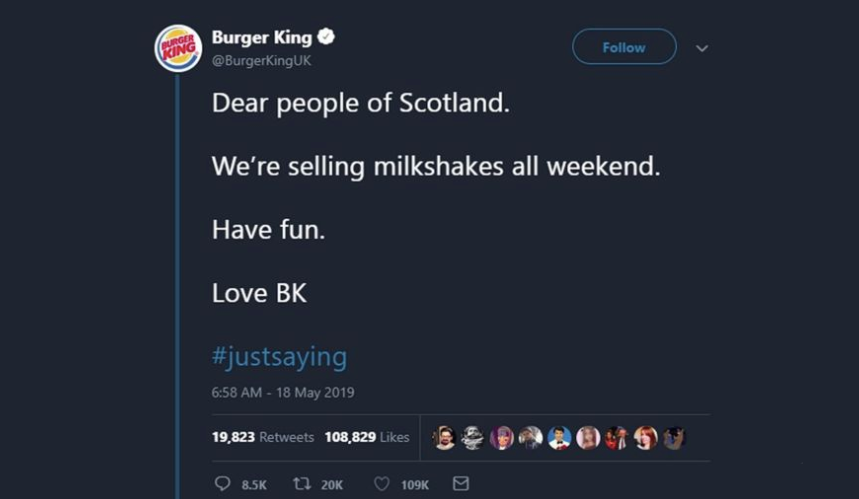 Newsjacking on social media has become a popular way for brands to organically generate hype and buzz around major news events.

The likes of Burger King, Domino’s and Gregg’s have become known in the industry for tongue-in-cheek tweets that tap into the cultural zeitgeist of the day, often to promote their products and services.

Steve Kuncewicz, partner and advertising law expert at BLM law firm, warns that brands and agencies need to exercise caution because the risks can often outweigh the reward.

"Humour doesn’t always translate easily online, and when you’re playing on such contentious and polarising issues as Brexit – especially where there’s any potential hint towards ‘anti-social behaviour’, as stated by the ASA – the likelihood is that you’re going to get a significant reaction, with some of it being negative," he said.

Kuncewicz believes the ruling sets a precedent that makes newsjacking more risky in the future.

"Going forward, agencies – especially those acting for smaller brands or companies where reputation is crucial – need to have a real understanding of their clients’ attitudes to risk, clearance and compliance processes to avoid them walking into similar adjudications in the future."

PRWeek would like to hear your views on newsjacking and the Burger King incident. Please share them with: arvind.hickman@haymarket.com.