Read used his address to look at the creative power of transformation by looking at a number of case studies, including Wendys, Flu Mexico and The People’s Seat with David Attenborough.

He said the PR industry should be about "transforming the fortunes of brands, places and communities, often creating opportunity where none obviously existed before." He also called on agency professionals to "embrace technological change and the power of creativity".

It was followed by a panel discussion on how technology can transform the entertainment industry.

Spotify EMEA VP Marco Bertozzi said: "People who own discovery will own the market place", while Activision Blizzard senior internal comms director Luke Mackay warned: "People shouldn’t have to trade data for experiences as it will create [digital] haves, and have-nots."

Everyone on the panel agreed that all the trends pointed to an increased personalisation of services on devices, and more immersive consumer experiences.

‘Design to the brief’

Dazed’s general manager Priya Matadeen looked at how the media should be used to reflect society, while founder at Ambionics Ben Ryan described how his personal experience of ingenuity led him to become a pioneer in a field that was previously alien to him.

Matadeen said that beauty influencers are having an identity crisis in which their advice isn’t being trusted anymore, and explained how the media group’s beauty platform started as a kick-back against beauty norms.

"Media should be at the forefront of shaping culture, not just reflecting it," she added.

Ryan’s story was one of "love and ingenuity" as he recalled his path to becoming a self-taught design engineer starting when his ten-day-old son had to have his arm amputated.

He explained how the NHS very rarely provides prosthetic limbs at such a young age, but determined that no obstacle would stand in the way of his child living a full and active life, he began making prototypes with a vision that many other children would benefit from the best innovations that science and technology could achieve.

Using knowledge from his own training as a neuro-psychology lecturer, and collaborating with engineers, bio-technologists and specialist designers, Ryan set-up a non-profit called Ambionics that has gone on to develop major advances in prosthetics technology.

On creativity, Ryan said: "There’s no point designing something complicated that’s going to break all the time - design to the brief - the child starts the process, not the designer."

Later at the event, dating application Bumble’s international head of marketing and communications Louise Troen shared her thoughts on "why your personal brand is more important than you think".

She explained that her creative strategy had been to "never ask for permission; always ask for forgiveness".

"Being known as the ‘Bumble Girl’ has allowed me to do more activism through the company," she said. "So it benefits both of us as I can speak sincerely about the business."

Finally, homepage editor at Sky Sports, Jon Holmes, sat down with professional racing driver Charlie Martin (below, right) to discuss how being a trailblazer creates opportunities for others. 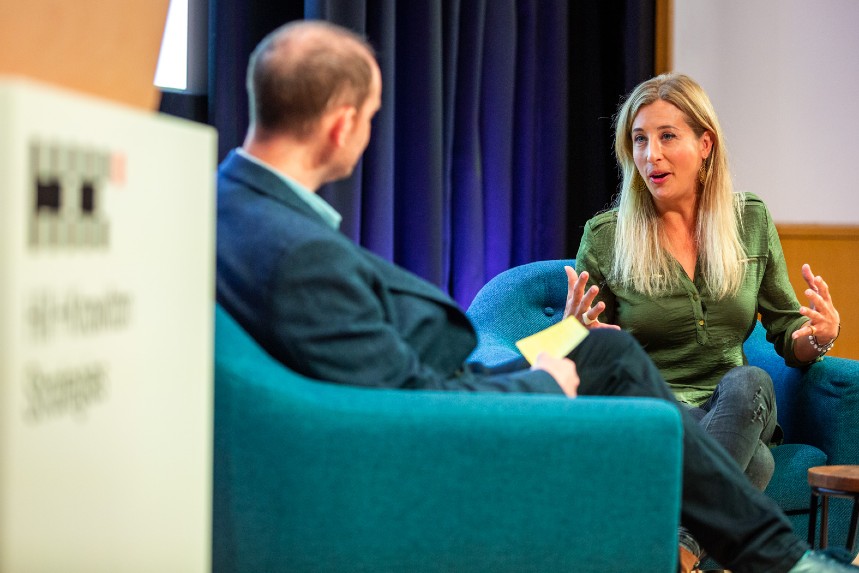 Entering motorsport is hard enough, but Martin also identified as transgender from as young as seven, transitioning to live as a female midway through her career in 2012.

She recorded her entire transition on her YouTube channel, helping to inspire thousands of people to begin their own journey.

"It’s a sport where you have to be brave and push yourself. But the vlogging on YouTube was a big thing; it gave me confidence and I hoped it would inspire others," said Martin.

She is now aiming to make history as the first transgender driver to compete at the Le Mans 24-hour race.