Major League Baseball, the oldest major professional sports league in the U.S. and Canada, made history by staging its first games between major teams in Europe this summer. The fierce rivalry between the New York Yankees and the Boston Red Sox was played over the weekend of 29 and 30 June at London Stadium in Stratford in front of a crowd of about 60,000 each day.

The London Series, which sold out in minutes, signaled the growing popularity of baseball in the U.K. MLB wanted to capitalize on this fan frenzy by reaching out beyond those avid fans inside the stadium. Reviving the popularity of the sport among younger fans, along with growing the game globally, are vital to sustaining MLB's future. 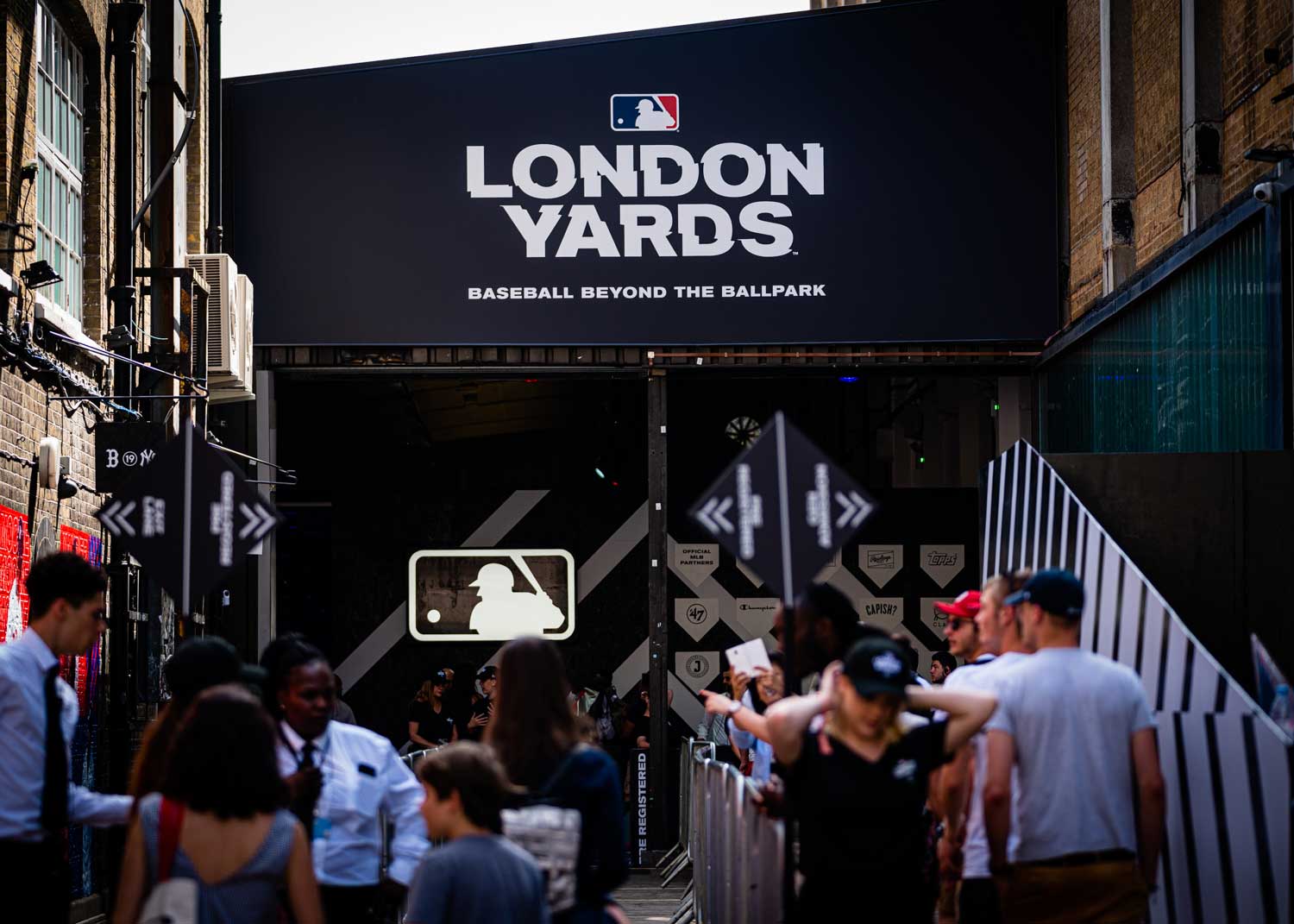 MLB, working with experience agency Imagination, staged a London Series fan festival over three days at east London’s The Old Truman Brewery, running in tandem with the games. The event, dubbed London Yards, aimed to engage a younger audience within a fun and relaxed environment. It also gave those who had missed out on tickets the chance to live and breathe the game.

"We knew that ticket demand for the London Series itself was likely to exceed supply, so we made sure that fans who were unable to obtain tickets were still able to participate in a variety of ancillary events including London Yards," Charlie Hill, VP of international strategy at MLB said.

For Nick Blenkarne, senior creative strategist at Imagination, launching in a market gave MLB the perfect opportunity to communicate in new ways and speak to a new generation of baseball fans.

The audience that MLB wanted to engage with were collectively termed "new-gen fans," a broad but very valuable target group for MLB in Europe. They are 18 to 34 years old, 51% female and have a high interest in sports, but are not followers of baseball. To engage this group, MLB set out to create an experience that was authentic to baseball, but that also appealed to the cultural passion points of the audience.

"Our insight was that what makes baseball unique is what happens beyond the ballpark," Blenkarne adds. "Teams such as the Red Sox and Yankees have such strong historic and cultural ties to their cities that they represent them on a global stage. The London Series gave us the opportunity to present not just the best of baseball, but also the best of Boston and New York culture to a millennial audience in London." 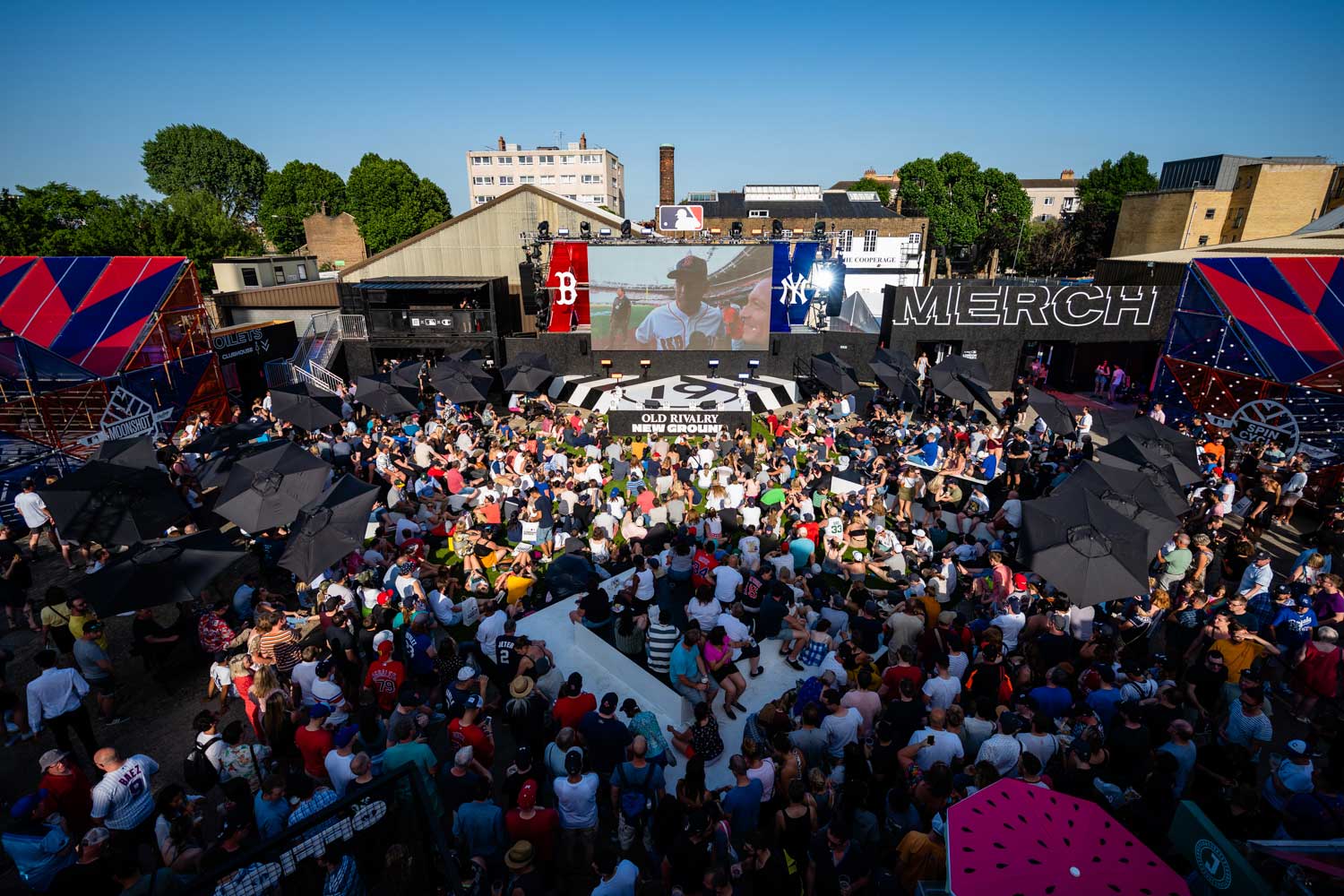 Imagination created five campaign "pillars": music, food, drink, style and sport technology, with the aim of bringing in thousands of new-gen London sports fans physically, as well as using these pillars to produce content to amplify the story to millions more worldwide.

Partnerships were crucial in bringing these pillars to life. To recreate the atmosphere of the Boston and New York music scenes, MLB teamed up with London-based internet radio station NTS and streetwear brand Champion to soundtrack London Yards, with DJs playing across the weekend. Fashion partners such as New Era and ’47 activated at the festival, while a collaboration with Battersea-based Mondo Brewing Company resulted in the creation of a bespoke London Series brew for the event.

MLB also worked with Rawlings to create a baseball-themed experience powered by technology at the heart of the festival: the world’s first indoor home run derby. This was housed within a giant LED cage and combined ball-tracking technology with a pitching machine and a bespoke game engine that turned the experience into a giant video game, played in both the physical and digital worlds. 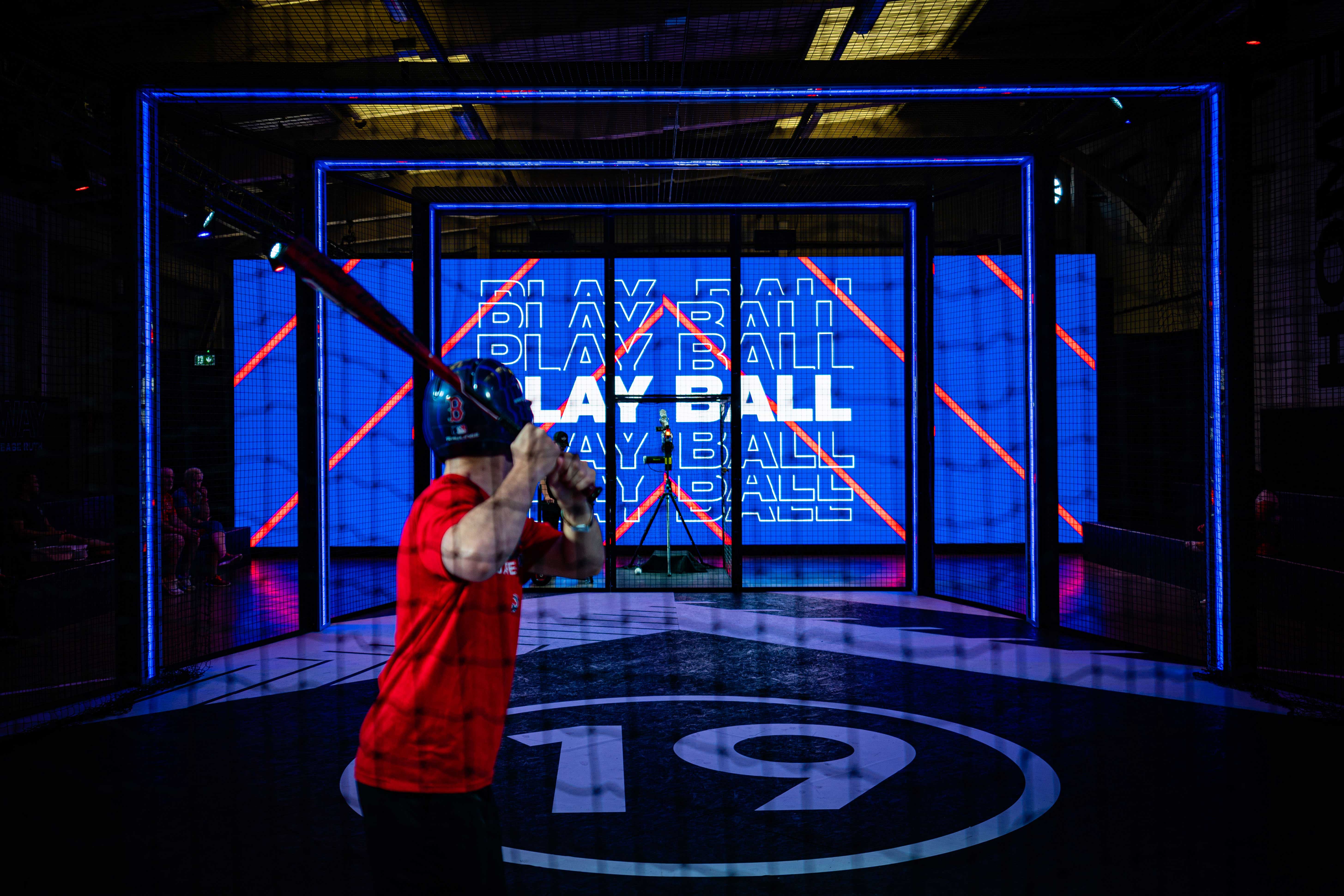 The actual space used for the event featured two interconnected venues within the Truman Brewery: U Block and Brick Lane Yard, reflecting the rivalry between the two MLB teams, with Boston and New York facing off in terms of environment, branding and programming.

U Block contained the Home Run Derby, where players had 12 attempts to hit as many home runs as possible for the Red Sox or Yankees. MLB ball-tracking technology accurately predicted the distance travelled, with the results displayed on an LED screen, with bespoke graphics and a soundscape that both celebrated success and mocked failure.

Virtual-reality technology took the experience to a deeper level, with four VR batting cages. Players put on an HTC Vive headset that transported them to the home stadiums. Depending on which team they were batting for, their cage would light up in red or blue when they hit home runs.

There were more baseball-themed activations at Brick Lane Yard. Spin Cycle was a playful take on a fairground game, where competitors threw baseballs at washing machines, with the speed of their pitches recorded. Moonshot was inspired by 1950s star Wally Moon, who played for the St. Louis Cardinals and Los Angeles Dodgers. It challenged visitors to hit a target in the left corner of the cage. Both games were deliberately "analogue," as inspired by the historic nature of the sport.

Brick Lane Yard was also where live screenings of the London Series were hosted, viewed on a huge screen, flanked by the clubs’ logos and a lighting rig. During the Saturday game, more than 1,400 people watched the event, with one highlight being a group singalong to Sweet Caroline. The stage was transformed into a platform for live music on the Friday night, giving London Yards a true festival feel. Two of U.K. music's upcoming stars, Nadia Rose and Lady Leshurr, took to the stage in performances supported by Sony, ‘47 and Highsnobiety.

Food, a vital element of any ballpark, was also carefully curated. Local street-food vendors provided items that were a London take on classic baseball stadium fare, with food inspired by the culinary heritage of Boston and New York. 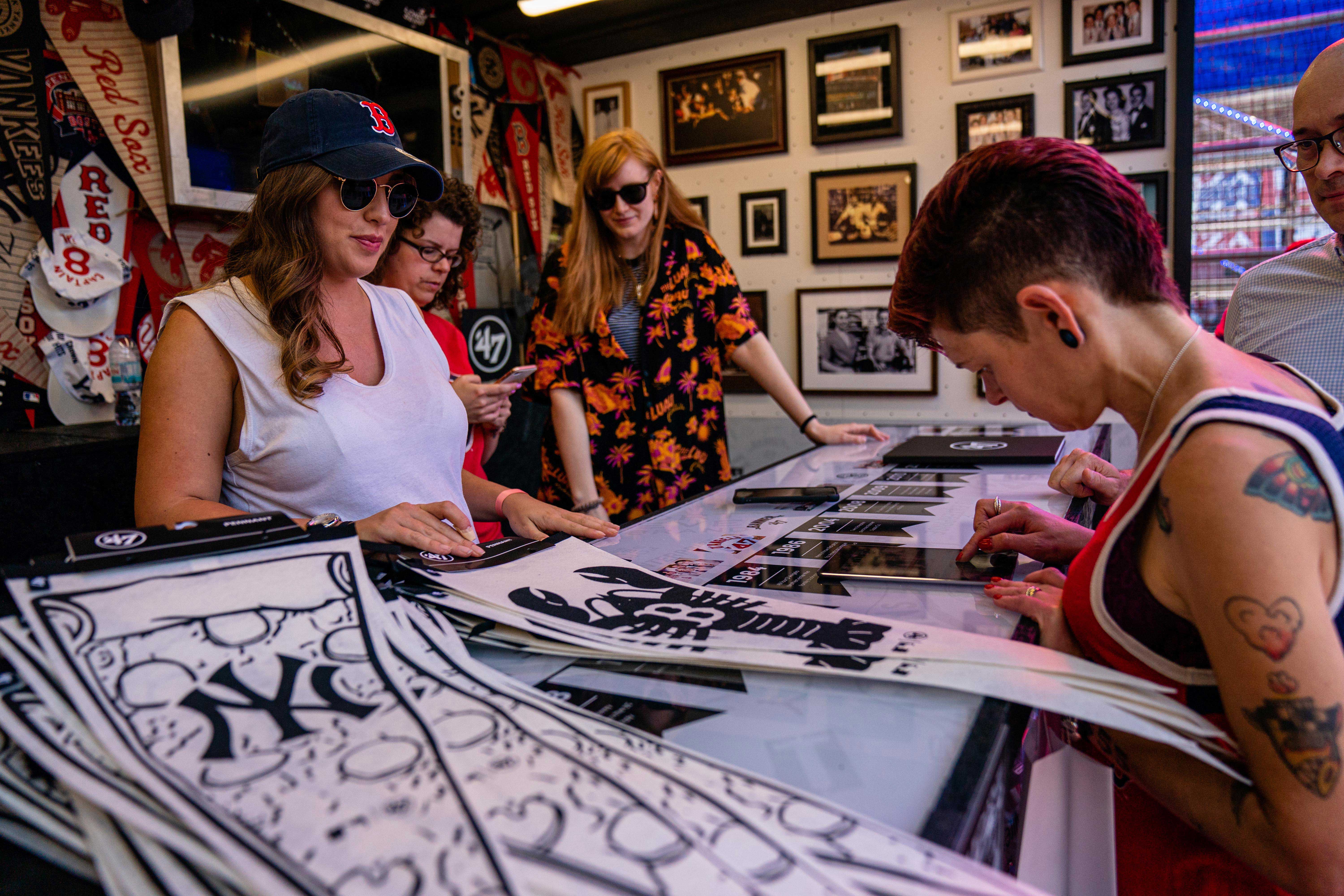 Creating a large fan park that could hold up to 5,000 people a day in the heart of east London and keeping them entertained was always going to be a challenge. But London Yards also had to factor in the unpredictable nature of competitive sport and the fact that a game can, in theory, go on indefinitely. The game on June 30 began at 6 p.m. and continued well beyond 11 p.m. Blenkarne said it was fortunate that Tower Hamlets council allowed the event to run late, so they could continue to stream the game and avoid disgruntled fans.

Imagination also had to overcome the challenge of dealing with two key audiences. The experience had to appeal to a new generation of fans, presenting baseball in a new and relevant way, while not alienating the existing core fanbase. 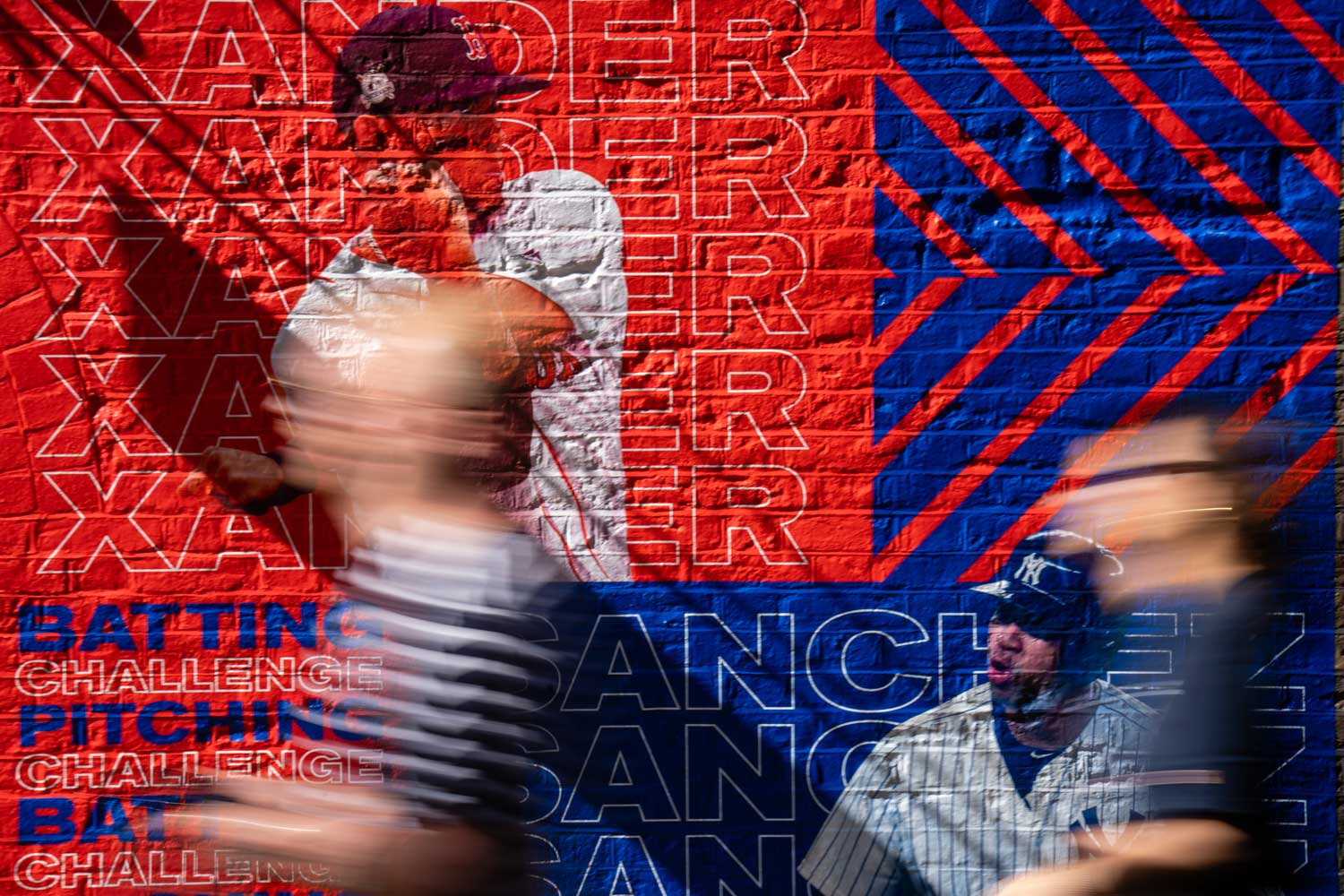 Key performance indicators were devised by Imagination in collaboration with MLB, focusing on visitors who came to the event and the content generated there.

"We knew that a lot of the avid baseball fanbase would attend, as the event was free and they love MLB, but a KPI was that 50% of content reach and engagement was with 'new-gen fans'," Blenkarne explained.

From MLB’s point of view, for many fans, this series will have been their first exposure to baseball. The focus for this year, Hill points out, was to leave them with a positive impression and encourage a new generation of fans to continue to engage in baseball, an objective supported by MLB’s grassroots activities, growing media presence and the London Yards event.

"London Yards was a perfect distillation of everything we are trying to make MLB stand for. The look and feel, content programming and partner integration has set a new standard for our events domestically and internationally," Hill continued. "We will look to continue to do this year-round and build on it as we increase momentum ahead of the 2020 games."

This year was a series win for the Yankees. Next year’s game, which will again be held at the London Stadium, will see the St. Louis Cardinals and Chicago Cubs go head to head.

For MLB and its agency, getting the creative execution right was crucial, staging a space to celebrate everything about baseball that would appeal to both types of audience. As the results show, the balance between physical and digital activities, partner activations, food and beverage offerings, plus the chance to watch live baseball, proved to be the ideal mix for both camps. 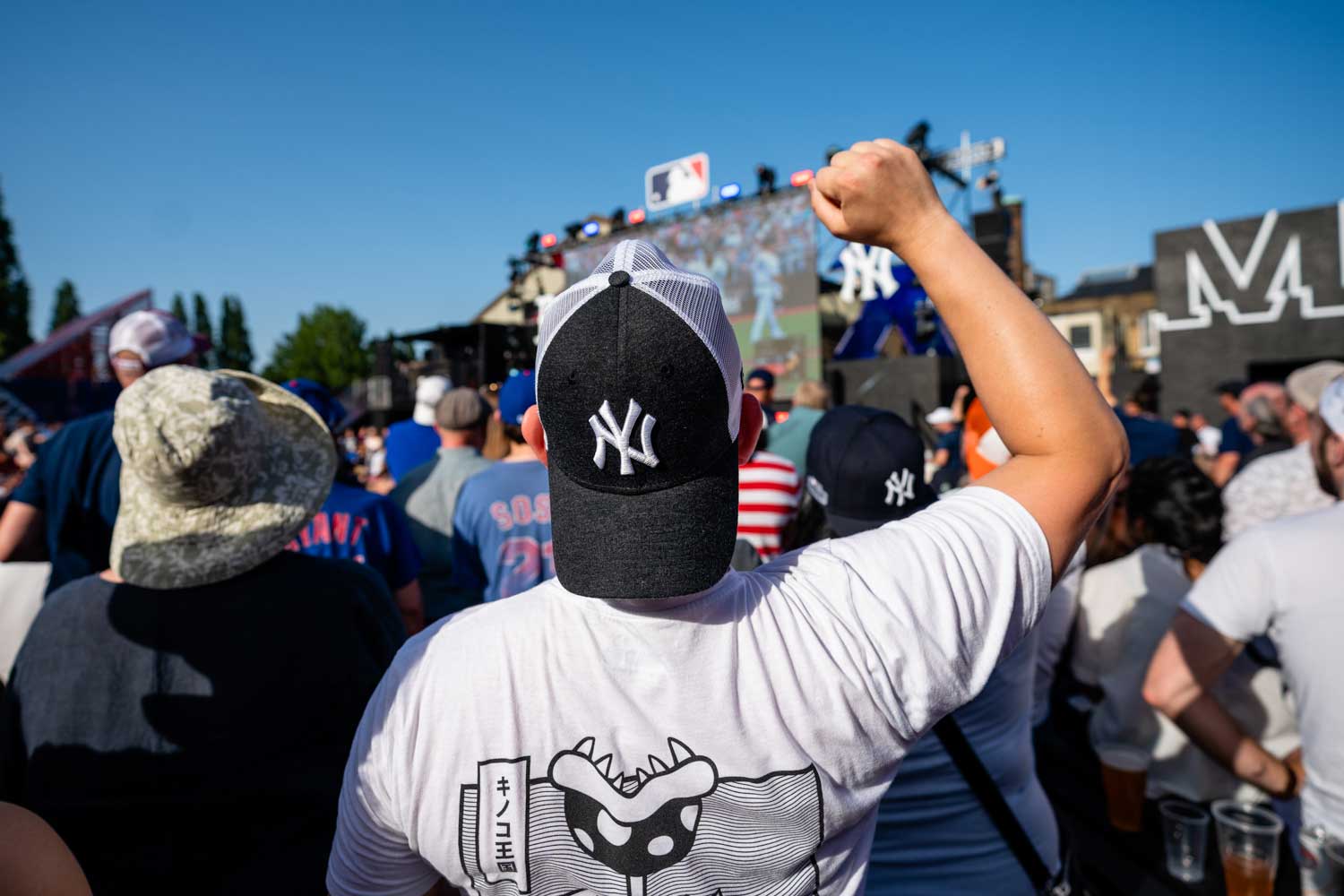