Add to this the thousands of travel agents, hotels and tourism operators in multiple countries that had seen a major part of their business evaporate overnight, and the scale of the crisis becomes apparent.

Effective and efficient communications is critical in such a complex and large-scale operation, whether it is guidance to holiday makers, trade updates or the latest flight information.

The authority tasked with leading ‘Operation Matterhorn’ is the Civil Aviation Authority, which has earned praise from travel PR experts over how it has handled the complex situation.

In an exclusive interview with PRWeek, the CAA’s director of comms Richard Stephenson explains how multifaceted and complicated the comms operation has been, how they’ve managed it and what they have learnt along the way.

Stephenson: When you’re confronted with the challenge of repatriating more than 150,000 people from across the world, from Cuba and Mexico through to Tunisia and Turkey, within the space of two weeks, the communications crisis machine needs to kick into action quickly.

We had a multi-phase approach, starting with the immediate challenge of getting the message right and shared through as many channels as we could find, as quickly as possible. Our message then moved toward consumer confidence and in the closing stages of the repatriation operation, we shifted our focus towards informing consumers and advising those people that were not able to take their holidays.

We had a massive media, digital, industry and influencer approach to implement quickly. Our press release was issued minutes after Thomas Cook ceased trading; the first live broadcast coverage began after three minutes; while our bespoke website and social media targeting to inform potential Thomas Cook customers abroad began within the hour.

Our communications activity even included creating an airports communications pack, with content including public address scripts and posters for impacted airports to use to make announcements to arriving passengers in the first few hours, who might not yet know that their flight was not operating.

We put ourselves in the shoes of other communicators who would have to respond to the challenge in their own organisations and tried to provide as much information and materials as we could.

A central part of our strategy was to point all of our channels, every piece of content, and our widely diverse audiences to our bespoke single source of truth-dedicated website, which in the first four days had over 10 million hits.

This purpose-built site contained all the information anyone could need about Thomas Cook ceasing trading, including help and guidance for customers, trade information and new flight information for passengers abroad. 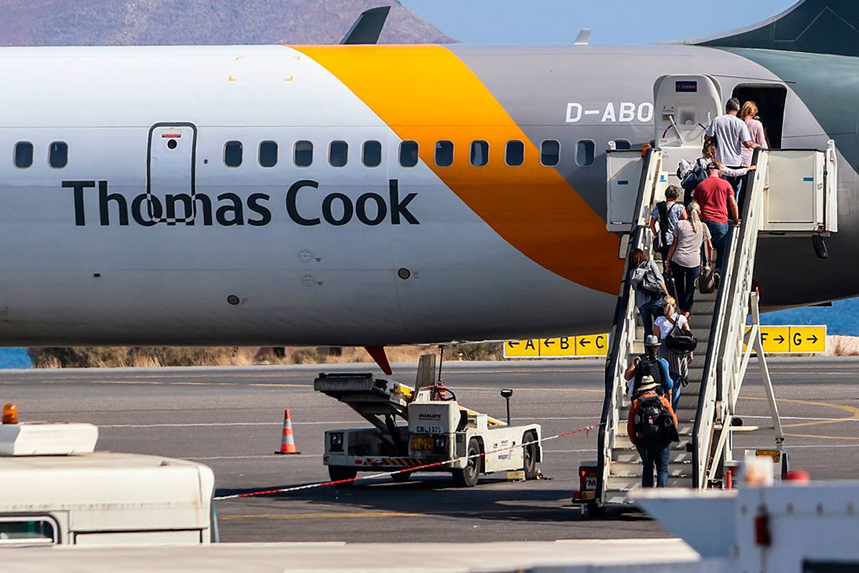 Was there much pre-planning work, given that Thomas Cook has had well-known problems for some time?

We are always planning and reviewing our contingency and crisis plans. We didn’t know until the last minute if this was going to happen as this decision has to be made by the company’s directors, but we had to be ready just in case it did.

There are a number of travel businesses that cease trading each year on varying scales, so we do have contingency plans, but we had a lot of work to do in the hours leading up to the liquidation being announced, in order to implement our communications strategy.

Naturally, we had a huge amount of work to do once the company was liquidated. Within an hour we had launched a bespoke and resilient website for customers, notified the media, started live interviews with major outlets and commenced our cross-platform social media campaign; all of which continued across our two-week flying programme.

How has the CAA communicated with various stakeholders, including holidaymakers, during this period?

Throughout Operation Matterhorn we have been thinking about what we would want from the Civil Aviation Authority if we were impacted by Thomas Cook ceasing trading; be it as a passenger, Thomas Cook staff, a night producer working for a 24-hour news station, or an on-call communications officer at an airport.

These external stakeholders were as important to our communications strategy as our own communications team. Therefore, we had to provide them with high-quality content and information as quickly as possible.

Airport staff in the UK and abroad received communications packs in the early hours of the morning after the company ceased trading, while targeted social media messaging went live alongside our bespoke website and call centre to provide new flight information for consumers and holidaymakers.

This was a vast communications operation. We covered every channel we could find, from our own multi-platform approach, to using Thomas Cook’s channels, the Government’s digital service and more traditional media and broadcast outlets. Accessing these channels in the middle of the night was a hugely difficult task, but one that has received positive feedback from the media and Thomas Cook customers.

A vital audience to remember throughout our operation has been those Thomas Cook staff and crew who lost their jobs. We know that a company with such long-standing history ceasing trading will have been very distressing for its customers and employees, and our thoughts were always with everyone affected by it. 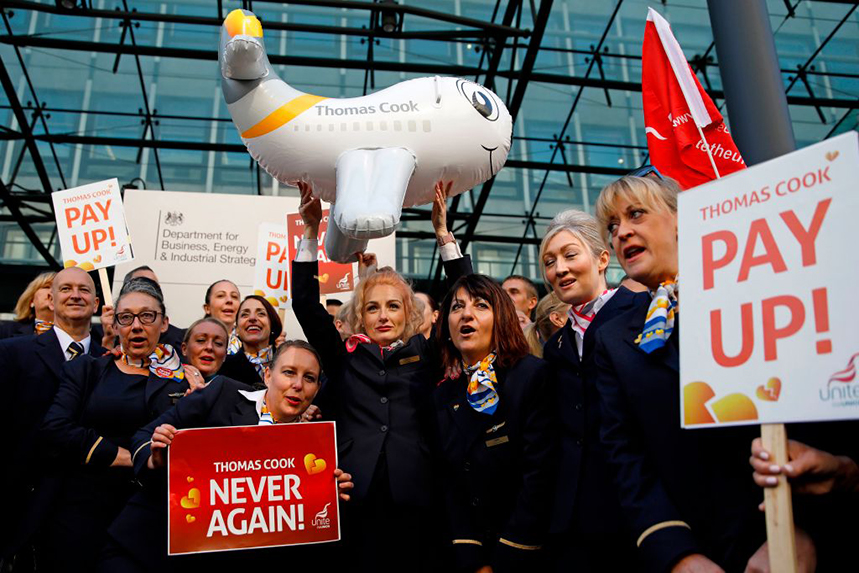 Ex-Thomas Cook employees demonstrate in London after delivering a petition calling on the Government to open a full inquiry into Thomas Cook's collapse. (Photo by TOLGA AKMEN/AFP via Getty Images)

What comms lessons has the CAA learnt from this experience and also from the Monarch collapse?

This operation required a wide range of skillsets, beyond the normal requirements of the Civil Aviation Authority’s relatively small communications team. Therefore, we had to quickly identify a number of consultants who could enhance our own team with their specific qualities and industry knowledge across airlines, hotels, tourism, Government and crisis communications.

We had to ensure that we had a team who could cover all vital elements of our strategy on a 24/7 basis.

In the past 12 months, we have also moved more of our communications activity in-house and enhanced and developed our own team, including recruiting a social media manager and an ATOL communications specialist. This has proved timely and extremely useful to enable us to provide a more immediate response and real-time monitoring in a fast-paced situation.

But key to our communications strategy was building our own bespoke television and radio studios as part of our operational hub, which enabled us to undertake close to 100 interviews within the first 48 hours, with a team of media-trained spokespeople working across the organisation.

These studios allowed us to promote and control the key messages during a developing and fluid situation. This was vital during Monarch, and having a broadcast studio ready with the support of our specialist agency, Markettiers, has been one of the stand-out successes of our communications operation this time round.

What comms challenges remain in the weeks and months ahead?

Although our two-week flying programme ends on Sunday 6 October, there will still be a great deal to do. Our team will remain focussed on supporting those customers who will still require our help and support, whether ATOL protected passengers returning to the UK or people with future bookings to secure refunds.

We have now launched the biggest refund programme the ATOL scheme has ever managed, with 360,000 refunds involving more than 800,000 people. Our communications must continue to be proactive and supportive to affected customers and all others who have been impacted.

None of this could have happened without the amazing team we have built for this operation.  Our existing colleagues, our dedicated consultants and the support of agencies. It’s been a huge team effort and I am so proud of every single person who has played their part.