Burger King’s attempt at mocking rival McDonald’s on Twitter has been rebuked by the Advertising Standards Authority for encouraging antisocial behaviour.

The fast-food giant had responded to a story in May about McDonald’s in Edinburgh choosing not to sell milkshakes amid concerns that people were buying them to throw at Brexit Party leader Nigel Farage, who was holding a rally in the city. 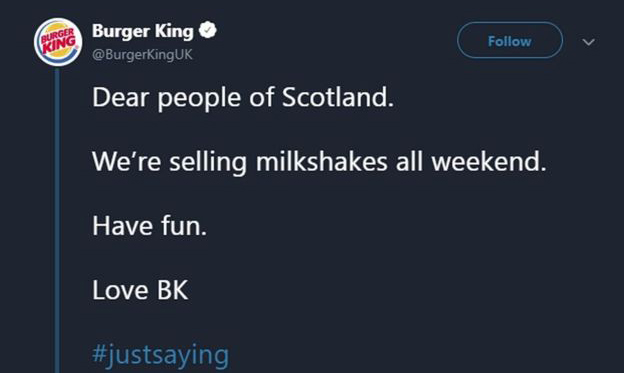 Farage had been hit by a milkshake during a rally in Newcastle days earlier amid a spate of similar attacks against far-right politicians during this year’s campaign for European Parliament elections.

Twenty-four people complained to the ASA, alleging that the post was irresponsible and offensive because they believed it encouraged violence and anti-social behaviour.

In response, Burger King said the tweet was intended to be a tongue-in-cheek reaction to recent events and that it did not endorse violence. It had also posted a follow-up tweet that said: "We’d never endorse violence – or wasting our delicious milkshakes! So enjoy the weekend and please drink responsibly people."

However, the ad watchdog ruled that the tweet should be deleted and not shown again. The ASA added: "Although we acknowledged that the tweet may have been intended as a humorous response to the suspension of milkshake sales by the advertiser’s competitor, in the context in which it appeared we considered it would be understood as suggesting that Burger King milkshakes could be used instead by people to 'milkshake' Nigel Farage.

"We considered the ad therefore condoned the previous antisocial behaviour and encouraged further instances. We therefore concluded that the ad was irresponsible."