Warning: An image of the ad appears in a tweet below that some readers may find disturbing

Labour MP Stella Creasy has taken to Twitter to decry a series of anti-abortion posters labelled "StopStella" appearing across her Walthamstow constituency, with the campaign attracting about 30 complaints to the Advertising Standards Authority.

Creasy posted on Twitter asking followers to "get me the CEO" of Clear Channel, asking "How much did you get for this crap?" and apologising for the graphic images of the billboards. 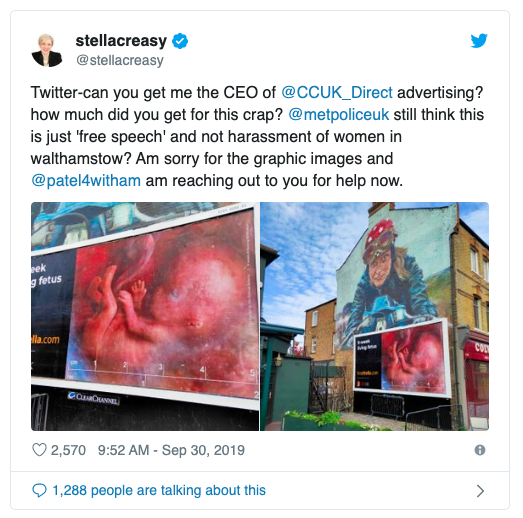 The ads, by US-based pro-life organisation Center for Bio-Ethical Reform, feature a picture of what it claims is a nine-week-old foetus. People on social media have questioned the veracity of the claim, but a spokesman for CBR insisted to Campaign that it is "an accurate image of a foetus nine weeks from fertilisation". He added that the campaign started last week and would run for about four weeks.

However, Clear Channel has since responded to the furore, saying it is "taking immediate action to remove this campaign".

Meanwhile, a spokesman for the ASA said that the watchdog was assessing whether or not to launch an investigation into the ads, which complainants have argued are inflammatory and incite hatred towards Creasy.

The Clear Channel spokesman said: "We sincerely apologise for any offence that has been caused by a recent campaign which we ran in Walthamstow on behalf of a customer.

"As an out-of-home media owner, we take a neutral stance towards all advertising and have robust procedures in place to ensure that the creatives we run comply with the UK advertising codes. While this campaign met these requirements, we accept that the content should have been scrutinised in greater detail and should not have been displayed.

"We are reviewing the internal processes we have in place regarding the campaigns and content we run to prevent an issue like this from happening again."

The "StopStella" campaign is apparently aimed at stopping Creasy in "promoting human rights abuses of children in the womb".

The organisers said they were "saturating Walthamstow" with the "humanity of the unborn child and the reality of abortion" across billboards around east London and photos shared on social media.

Resonding to a question from Campaign about whether the group considered it responsible to run ads actively targeting an individual at a time when hatred and violence towards politicians is at a high, the spokesman said: "You're begging the question. You are assuming that the unborn child is not also a human being. Indeed, that's what they are and they are being victimised by extreme abortion advocates who want to see abortion up to birth for any or no reason.

"It is stunning that journalists are buying into the attack on expressive rights by politicians who want no accountability. Where have we advocated for violence or even unfairly attacked Stella? She is simply attempting to silence any opposition to her agenda.

"Priti Patel and Rupa Huq have also complained about a presence outside their GP surgeries. Shouldn't we all feel uncomfortable with their aversion to a countervailing perspective?"