In the Cold War, denim was currency and Levi’s its greatest denomination, according to Chip Bergh, president and CEO of iconic jeans maker Levi Strauss & Co.

Bergh was a captain in the Army stationed in West Germany when he traveled for a couple weeks through the Nordics. One night at a hostel in Bergen, Norway, he washed his clothes in the shower, including a pair of Levi’s, and left them to dry by the open window overnight. (To this day, Bergh still wears his jeans in the shower.) In the morning, realizing he’d left his wallet out, he ran to the window to find something strange.

"My wallet was there and the Levi’s were gone," Bergh says.

This was no coincidence, either, he adds. The power of the brand was such that his college friends on holiday would barter their way through the Eastern Bloc with suitcases full of Levi’s, Bergh recalls.

"So the brand was money back then, as good as gold," Bergh says. "When I joined this company, it was all about how we get back to that kind of stature."

For the self-described "brand guy," everything Levi’s stands for can’t just be a nice add-on. The brand, when married with an exceptional product, must be worth its weight in gold.

That means articulating values and taking on the most controversial issues of the day, including hot-button topics such as gun violence and voter registration. Consumers are not only looking for companies that add value, but that also have values that mirror their own, Bergh says.

His own values were forged through experiences such as serving jury duty for a murder trial in Ohio. "It was quite the lesson in civics," Bergh says of the trial, which lasted three and a half "intense" weeks.

Ultimately, the jury found the defendant guilty and sent him to the electric chair. The judge assured the jury after the trial that they came to the "right decision," Bergh recalls.

"You should do it at least once because you really do get to see the Constitution at work," he says.

That sense of duty took on new forms when Levi’s partnered with Patagonia ahead of the 2018 midterms to launch "Time to Vote," which gave employees much-needed time off to go to the polls.

To further increase U.S. voter turnout, the duo invited more companies to join through MakeTimetoVote.org. Eventually, the initiative became a coalition of more than 200 companies, including FleishmanHillard, Lyft and Dick’s Sporting Goods.

Levi’s partnered with Rock the Vote so voters could either check their registration status or register to vote, as well as Headcount.org, which allowed the coalition to drive voter registration at music festivals and concerts. The campaign was expressly nonpartisan, Bergh says. Its advertisement shows voters of all walks of life suiting up in denim to exercise their rights. 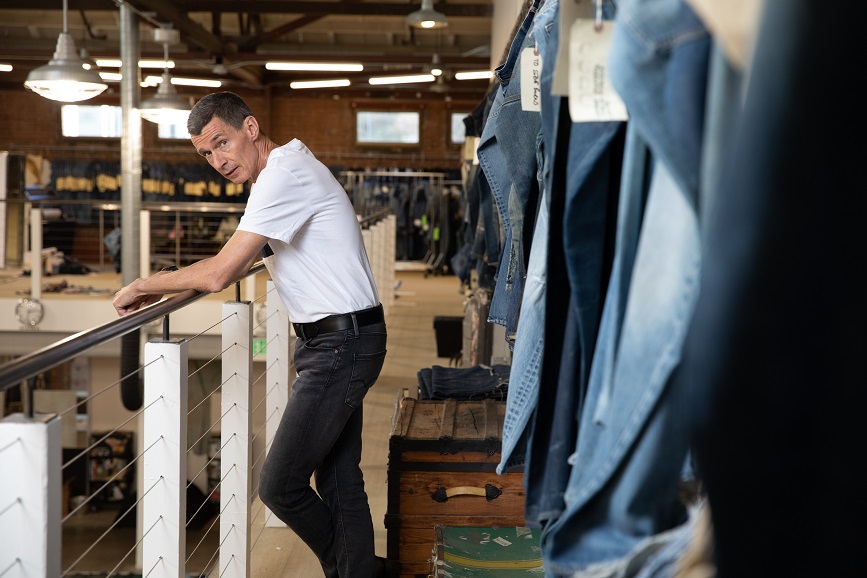 That experience would prove invaluable once Bergh moved to Levi’s in 2011 and sought to revitalize the company against stiff headwinds in the market. Retail pressures have forced the closure of thousands of brick-and-mortar locations and squeezed Levi’s wholesale business.

Bergh believes demonstrating value and purpose is fundamental to that process. "My title is chief executive officer, but I actually think a big part of my role is chief values officer and ensuring this company lives up to our legacy and to not be afraid," he says.

September marks the one-year anniversary of the Safer Tomorrow Fund, a philanthropic arm Levi’s established to deploy $1 million in grants to a variety of nonprofit groups dedicated to ending gun violence in the U.S. Recipients of Safer Tomorrow grants include activist organizations Everytown for Gun Safety and Giffords: Courage to Fight Gun Violence, which is led by former Congresswoman Gabrielle Giffords. It has also donated money to interfaith organization Live Free (also known as BBGVPC) and student journalism organization The Trace.

Levi’s officially "put its toe in the water" following a November 2016 incident, in which a customer at one of its stores accidentally shot himself while trying on a pair of jeans.

After that, he made the "respectful request" to customers that they refrain from bringing firearms into their locations. It did not ban them. The Marjory Stoneman Douglas High School shooting in Parkland, Florida, proved to be the tipping point. The shooting, which killed 17 faculty and students, struck a personal note for Bergh. He thought of his own daughter and active shooter drills she has to participate in at her school, he says.

"It was a soul-searching moment for us," Bergh says. "I felt we have an obligation to play an important role in communities to move these difficult conversations forward in a productive way."

In September, Bergh marshaled corporate America in an effort to force government to take action, enlisting more than 100 business leaders to sign a letter to the Senate demanding background checks on all firearm sales and stronger Red Flag Laws, which would prevent weapons from falling into the hands of troubled individuals.

Meanwhile, Safer Tomorrow is providing youth activists the encouragement and resources they need to effect change. Its funds enabled The Trace to launch Since Parkland, a collaborative project "carried out on an exhaustive scale" telling the stories of 1,200 child gun victims in the 12 months following Marjory Stoneman. 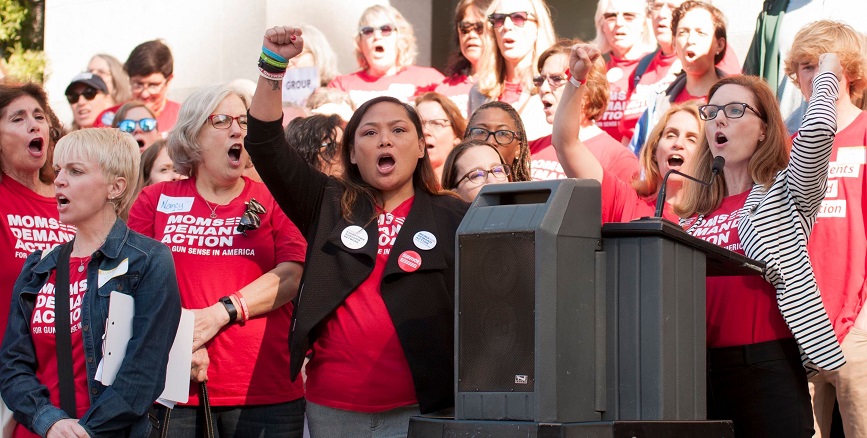 "Levi’s saw the potential in our Since Parkland project, through which The Trace worked with more than 200 teen journalists to tell the stories of kids killed by guns in one year in America," said James Burnett, editorial director of The Trace. "Its grant was critical in ensuring we had the resources to pull off that project, which came together pretty quickly and under intense deadline pressure."

Several other news organizations were involved in the effort, including the Miami Herald and other McClatchy-owned titles.

Throughout Levi’s 166-year history, it has broken ranks from more reticent corporate peers to weigh in on its own agenda.

In 1961, four years before the Civil Rights Act was passed, Levi’s opened one of the country’s first desegregated factories in Blackstone, Virginia. In 1981, at a time when President Ronald Reagan wouldn’t mention AIDS publicly, Levi’s matched employee donations to a San Francisco clinic to assist victims of the epidemic.

That history gives Bergh a degree of latitude around AIDS, human rights and sustainability. When operating within that framework, he doesn’t have to consult Levi’s board or its Nominating Governance and Corporate Social Responsibility Committee, which oversees Levi’s corporate governance on social issues.

But this did not extend to the issue of gun violence. Levi’s "didn’t have a dog in this fight" and jumping into the debate was not without business risk, Bergh admits. The U.S. is still its biggest market and its iconic roots go back to the Wild West.

Initial research by Levi’s found the issue didn’t skew red or blue, and it gained in importance with younger demographics. Bergh’s original idea for the Safer Tomorrow Fund was a one-year $250,000 program, but the board of directors balked at the size of the commitment: It was too small.

"Basically, they said, ‘If you’re going to do this, don’t do it for a year; commit to four years. And don’t do a quarter million dollars, do at least $1 million,’" Bergh recalls.

Giving an organization a grant only to take it away after a year may hurt more than help it, Bergh says. "To be able to say to some of these organizations, ‘We’re with you guys for the next few years’ is a big difference to smaller nonprofits."

He says the National Rifle Association has "spun" Levi’s stance as "trying to eradicate the Second Amendment." 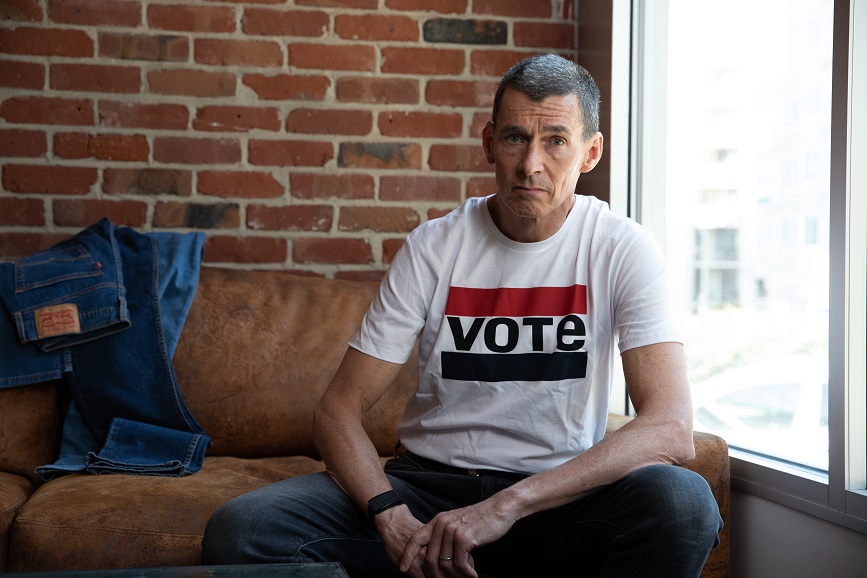 After Levi’s announced it would be partnering with Everytown for Gun Safety, which was founded and funded by Michael Bloomberg, the NRA claimed Levi’s was departing from its legacy representing American freedom. The gun lobby group added Levi’s was working with "a billionaire oligarch [Bloomberg] in an effort to empower the government to trample upon the fundamental rights of the American people."

Despite the blowback, Levi’s reported full-year net revenue grew 14% to $5.6 billion in 2018. Levi’s social stands don’t appear to have negatively affected sales, but Bergh says this doesn’t mean he can say the opposite is true.

"But I do believe that, over time, these things have a cumulative impact on consumers," he explains. "Consumers are aware, I’m sure. And I’m confident the position we’ve taken is the right place to be and is probably haloing our business in a positive way."

‘The center of culture’

Bergh says Levi’s marketing, product and comms teams have put the brand back "at the center of culture," even if he doesn’t always know what that culture is, confessing he’d "never heard of" Stranger Things before it designed an exclusive range of retro character outfits around the Netflix show. And Levi’s collaboration with Coachella lifted sales of its 501 cutoff shorts by 50% in Q1 of 2019. Beyoncé famously wore Levi cutoffs at the festival the year prior.

Bergh says Levi’s has recaptured its spark among young people after missing out on a "lost generation" that grew up on Abercrombie and American Eagle. He also credits its renewed vitality to "seamless integration between product and marketing and PR and communications."

However, questions about whether Levi’s ability to compete in a rapidly changing market continue. Levi’s IPO earlier this year was celebrated for bucking the trend of predominantly debt-heavy Silicon Valley unicorns going public. Now, skeptics have honed in on its declining U.S. wholesale business as the company balances atop the "melting iceberg" of U.S. department stores.

"Levi’s grew in that environment despite the fact U.S. wholesale was down," Bergh says. "It grew because our DTC business was up 7% [in Q1]." With more than 800 brick-and-mortar locations and a profitable website, Levi’s achieved 9% year-over-year growth in DTC in Q2 as well, "primarily due to performance and expansion of the retail network and e-commerce growth," according to its earnings.

Growth will also come from women’s apparel and lifestyle and a concerted push into China, the company says. To illustrate how seriously Bergh takes the market, he has visited the country twice since the IPO.

While the trade war escalates between China and the U.S., which could weaken the country’s manufacturing base, Bergh says he remains bullish on Levi’s prospects in that market — 20% of the overall apparel industry is consumed in mainland China, but it represents a mere 3% of Levi’s sales.

"The Chinese consumer has not been affected by [the trade war rhetoric]," Bergh says. "We’re a pretty iconic American brand and there’s been no evidence of backlash against American brands. We’ve got a great team and strong strategy in place, and I am very committed to seeing that become a much more meaningful part of our overall business."

Levi's CMO Jen Sey and CCO Kelly McGinnis will be appearing at PRWeek's PR Decoded: Purpose Principles conference in Chicago on October 16-17. The inaugural PRWeek Purpose Awards will be handed out on the first evening of the conference.