The banners are an attempt to rebrand Burger King meals, including ‘Fast Food Fries Forests’ and ‘Burger King Flame Grilling the Amazon’.

The stunt included eight performers dressed up as giant white-cheeked spider monkeys (an endangered Amazonian species) accompanied by volunteers "serving up the truth about Burger King's smoky record on deforestation". It comes less than a week after Burger King UK launched a campaign to eradicate single-use plastics in kids meal toys.

"The Amazon is still burning, yet Burger King keeps buying meat and animal feed from the companies responsible for the crisis," Greenpeace head of forests Richard George said. "Their burgers are flame-grilling the Amazon."

A Burger King UK spokesperson told PRWeek that the burger chain had invited Greenpeace to discuss the issue last Wednesday.

"We are still yet to receive a response from their team – we would welcome a discussion with them on this important topic," the spokesperson said.

"We work in partnership with our suppliers to ensure that our ingredients and raw materials are sourced in a sustainable way, with minimal impact to the environment." 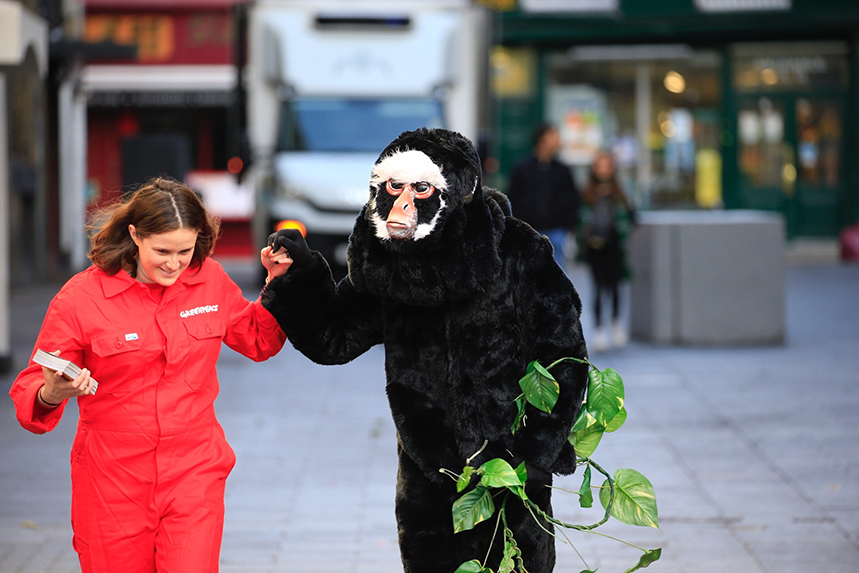 Greenpeace’s beef with Burger King stems from its soya and meat supply chain, which Greenpeace said have been complicit in Brazilian rainforest destruction.

Among these are Brazil slaughterhouse JBS and Marfrig, which Greenpeace said are "notorious for their role in destroying the Amazon to graze cattle".

Burger King’s soya suppliers Cargill and Bunge have been fined for destroying forests in the Brazilian Cerrado.

Greenpeace said that although Burger King’s UK meat is sourced locally, it claims much of it is still fed on soya, "much of which comes from Brazil" and is a major culprit in Amazon deforestation.

Tens of thousands of blazes have engulfed large parts of the Amazon rainforest and surrounding areas, many of which are believed to be lit illegally.

"Growing demand for meat from fast-food giants like Burger King is leading to vast areas of Brazilian forests being destroyed for cattle ranches and animal feed. Burger King must stop buying meat and soya from Brazil until the Amazon and its people are protected," George said.

"Global brands like H&M, The North Face and Timberland have already stopped sourcing leather from Brazil until they can be sure their products do not contribute to environmental destruction. It’s now time for the biggest fast-food companies to stand with the people of Brazil and say no to Amazon destruction."