WE Communications’ annual Brands in Motion study has revealed that brands – more so than ever – are in a position to lead with purpose.

More than half (54 per cent) of respondents said they want the brands they support to balance great product with powerful purpose and activism. This means that brands have never had this much power or opportunity to create positive change, but also risk being more exposed and disposable. And for brand communicators, this means that consumer scrutiny of a brand’s products, ethical practices and purpose in the world has never been more intense.

So what does it mean to lead with purpose? According to the report, it means leading as a human. "The questions you need to be asking yourself are ‘how can I best tell the story of my brand doing good in the world?’ ‘how am I fitting into people’s lives?’ and ‘am I treating people with respect?’" said Kass Sells, global COO, WE Communications.

Some 83 per cent of respondents believe brands could be capable of providing stability, and 74 per cent expect brands to take a stand on important issues. This means that a staggeringly high percentage of consumers and buyers are looking beyond brand activism as mere CSR or a tick in the box. At the very core of it, consumers need to understand the role of brands in improving humanity.

Can brands unite the world?

While it’s fair to hold brands accountable for the reasons they say they exist, is it also fair to place the burden of world peace on brands? In a world of increasingly polarising politics, consumers share a unified mindset when it comes to technology and what brands are capable of, according to the report.

This means that consumers are optimistic about brands’ ability to harness tech in a human way and provide stability in a world that feels increasingly out of balance. Ultimately, consumers expect brands to take a stand on human issues especially because they believe that brands can. 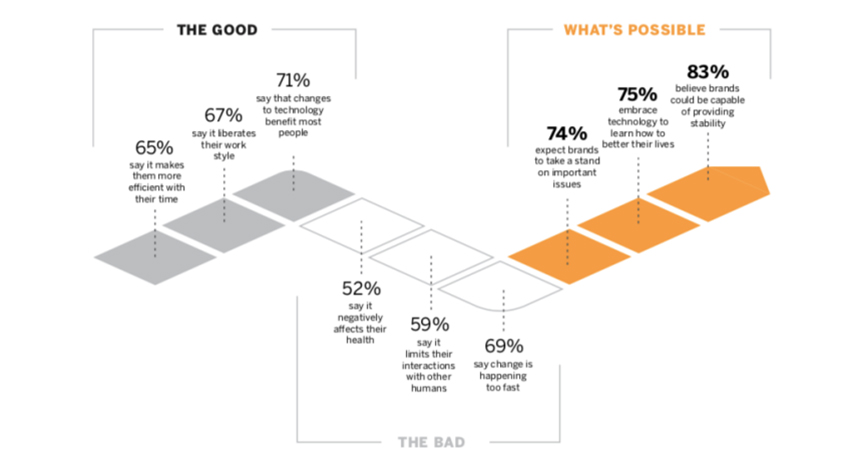 Brands must prove they understand their customers as human beings, and that they’re doing good in their communities and in the world at large. Brands that do this can build a new, deeper brand loyalty based on mutual respect. And brands that can’t risk losing everything, the report said. 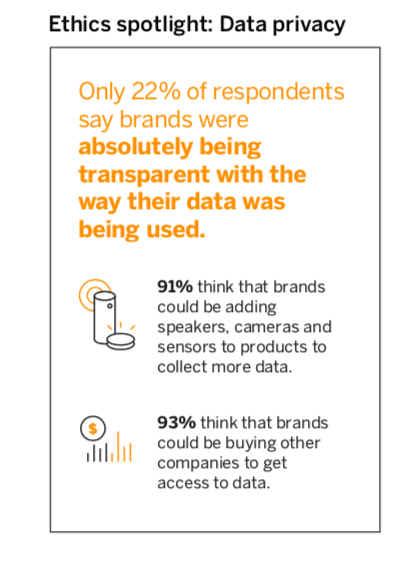 There’s also the question of using tech ethically, which is unsurprisingly high on consumers’ radars. 96 per cent of respondents agree that brands have a responsibility to use tech ethically, and 94 per cent believe that the government has a responsibility to regulate tech. A whopping 91 per cent of respondents also think that brands could be adding speakers, cameras and sensors to products to collect more data, and 93 per cent think that brands could be buying other companies to get access to data.

As we’ve seen in the news time and time again, this expectation on brands to behave by the books is not always smooth sailing. Whether it’s managing data responsibly, strengthening privacy policies and ensuring partners are acting ethically, consumers expect rapid innovation as well as the ability for brands to strike the right balance between "nimble tech innovation and thoughtful accountability".

The difference between this year’s findings compared to last year’s is that more consumers now carry the weight of accountability around tech. In APAC, 97 per cent of respondents say they too, have a role to play in ethical responsibility.

Generally, findings in Asia are similar to that found in the West, with both sides of the world this year paying increasing important to ethics, purpose, and authenticity. For the study, a total of 25,193 responses were collected across eight global markets between April and June 2019.