It was a decade in which it felt like all the old accepted norms of PR were going out of the window as everything from the media and art to celebrity and politics were in a state of transformation.

Matthew Freud’s working from home today. But then, if I had Matthew Freud’s home, I’d do the same. It’s in the tranquil heart of Primrose Hill, spanning a mews yard between two large Victorian homes.

Not surprisingly, bearing in mind Freud’s passions – oh, and the fact his uncle was Lucian – it’s chock-full of modern art. If you asked me whether this feels like old or new money, I’d say both.

It’s good to be back in Freud’s house-cum-office and find PRWeek’s inaugural Hall of Famer in relaxed and chatty mood.

'Friendship, parties and being creative' - Lynne Franks on 'technicolour' PR in the 1980s

Although he set up his eponymous consultancy in 1985, it was the 90s when his agency set the world alight. From launching Channel 4’s The Big Breakfast in 1992 to promoting Charles Saatchi’s ‘Sensation’ art exhibition in late 1997, Freuds helped define what was a landmark decade in the history of media, politics and public relations.

Freud says the 90s should be framed in the collapse of hierarchies in newspapers, in entertainment, perhaps even in British society. In this sense Freuds exemplified the new establishment that fuelled a by-now burgeoning UK PR sector.

The new power of fame

"No one broke the rules in the 1980s. The architecture of national newspapers was hard. News was made by politicians, captains of industry… and very famous people who got into trouble. So political and corporate PR had become established," he says. "But I came from the world of entertainment (Freud worked as music industry press officer) and the ents media landscape was limited to Bizarre in The Sun (a half-page each Friday), Nigel Dempster’s column in the Mail (mainly about people with money), some features in The Sunday Times Magazine.

"By the early 90s, however, the lines became blurred between what was entertainment, what was gossip, what was news… and, crucially, who the people of interest were. Suddenly almost anyone could be famous, with a good enough headline. This I guess was the forerunner of the Paris Hiltons, the Kardashians – this idea that people could be famous just for being famous."

What prompted this – the post-Thatcher, post-industrial Britain of the time? Freud feels it was driven by the tabloid media itself. "By 1990 The Sun had started making its Page 3 girls famous. Linda Lusardi, Samantha Fox… it had become a sort of fame generator." 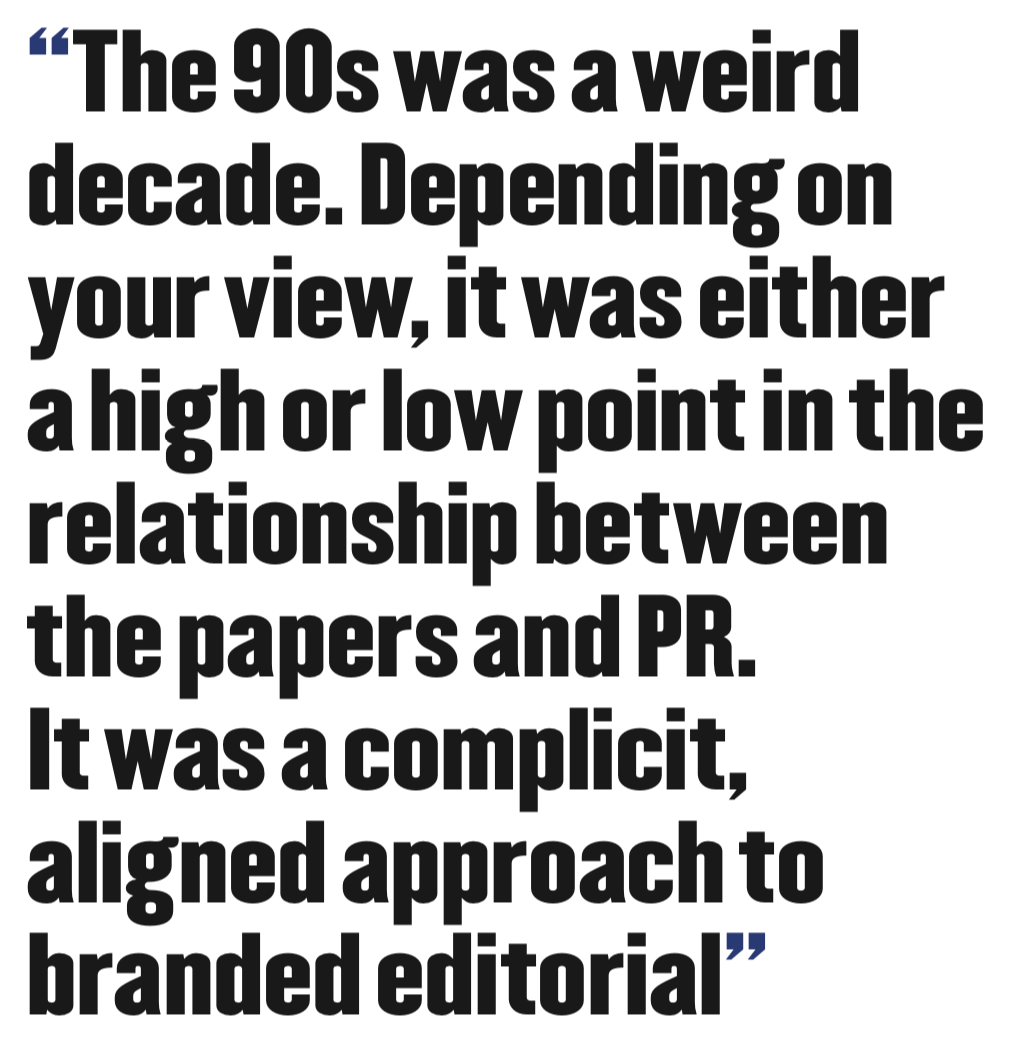 He says he realised this new power of ‘fame’ when he launched Planet Hollywood London in 1993, which involved flying the three biggest movie stars on the planet – Bruce Willis, Sylvester Stallone and Arnold Schwarzenegger – to London, to garner coverage on virtually every front page and TV bulletin.

"Entertainment reporters had risen through the ranks and become editors – Piers Morgan, Rebekah Brooks, Andy Coulson – and they started breaking stories out of the columns on to front pages, which was mad, because the front page was for ‘news’ and, definitively, the opening of a ham-burger restaurant wasn’t fucking news."

Freud believes that Planet Hollywood symbolised the era because it was tangibly a cynical marketing construct. "Whereas the Hard Rock Café’s success had been organic, PH was designed by spreadsheet," he says. "I remember this shameful interview with the three movie stars that we negotiated with Michael Aspel." Aspel & Company was the big chat show on ITV at the time. "They had to show the logo, he had to read the menu. It was the gratuitous abuse of an editorial channel by leveraging celebrity into marketing dollars."

Indeed, the episode became notorious and the Independent Television Commission censured the programme for promoting the restaurant. Soon after, the series was cancelled and Aspel reportedly vowed never to host a chat show again.

Equally definitive was arguably the British movie of the decade, Four Weddings and a Funeral. Freud already represented Richard Curtis (the film’s screenwriter and his brother-in-law) and its main star, Hugh Grant, so the agency masterminded the infamous première.

"We had this ridiculous idea of everyone attending in their wedding dresses. Then Liz Hurley (another client, who was dating Grant at the time) got out of the car NOT wearing a wedding dress, but wearing ‘that dress’. I was on the carpet and when I saw it I said: ‘That’s going to be called that dress.’ Liz remains one of the great [self-]publicists, with an innate understanding of tabloid culture."

It was perhaps Freuds’ transition from entertainment specialist to consumer-brand promotion that redefined consumer PR. By the 90s there were many excellent consumer PR agencies – Lexis, Red Consultancy, QBO – but Freuds became the biggest by linking brands, celebrity and media. Above all, it had a stronger relationship with the tabloid media than other PRs – and it was the minor redesign of a Pepsi can that proved the point. 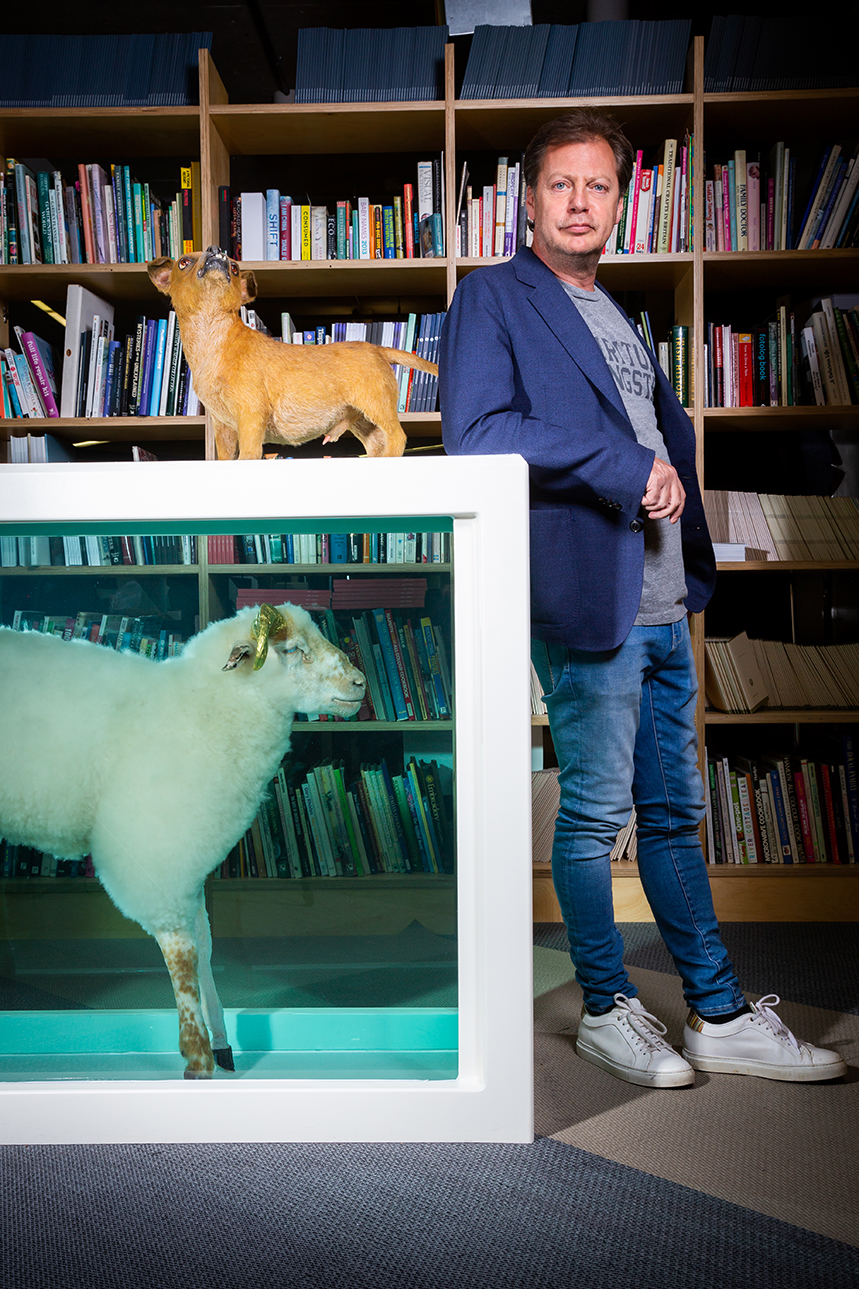 "In 1996 Pepsi was neck-and-neck with Coca-Cola and it decided to redesign the can to make it more blue. It went to BBDO to make the big ad to launch Pepsi Blue, but the ad agency dropped the ball and made a really shite ad, which Pepsi refused to run. It was two months before the new livery [was due to launch] and no ad agency could turn it around, so Pepsi said: ‘If we give you the budget, of a different order to a standard PR launch, what can you do?’

"We did a little brainstorm with a brand manager from Pepsi and someone said: ‘What about painting Concorde Blue?’ We called British Airways and they said no, so we called Air France (the only other Concorde operator) and, amazingly, they said yes. We hired a hangar at Gatwick and got a rock festival designer to create a blue city. We flew in Claudia Schiffer, Andre Agassi and Cindy Crawford. We went to the Mirror, where Piers Morgan was editor, and they agreed to turn the Mirror blue for the day; to print the entire news-paper on what was, effectively, branded paper. So a soft-drinks company changing the can design led to the front page of the Daily Mirror.

"There was a faked paparazzi shot of a blurry can of Pepsi, positioned as ‘a scoop’. The night before launch, ITN’s 10pm news got to a perimeter fence and managed to ‘scoop’ a picture of just the nose of Concorde sticking out the hangar."

Freud adds: "The 90s was a weird decade. Depending on your view, it was either a high point or a low point in the relationship between the papers and the PR business. It was a complicit, aligned approach to branded editorial. Meanwhile, the News of the World was undoing all the good work on the celebrity front. The real tension between PRs and journalists came with the Sundays."

But what Freuds had helped the PR industry realise was that it, too, could create "muscular marketing"; earned-media campaigns that genuinely changed people’s attitudes and had an impact on consumers’ buying habits.