Lord Chadlington can hardly speak for laughing as he describes a mid-1970s pitch with Mercedes-Benz in Germany.

Accompanying him (then plain Peter Gummer) was a design specialist who arrived "looking pretty dishevelled" about 10 minutes before the pitch. His co-pitcher pushed the button for the first slide on his projector.

"Up comes a picture of him and his family on a beach in Broadstairs," Chadlington recalls. "When he rushed out to catch the plane he had picked up the wrong carousel. There was no way out of that."

One gleans from Chadlington that pitching nightmares were more common in the 1970s, when PR was, in his words, a "juvenile" sector.

Few can speak about UK PR in the decade with as much authority as the industry grandee.

Having earned his spurs at London agency Hodgkinson Partners in the 60s, and later at the Industrial and Commercial Finance Corporation, Chadlington founded Shandwick in 1974, aged 31. It became the UK’s biggest PR shop by the decade’s end, floating in 1984 and eventually selling to Interpublic in 1998.

Sitting in his smart Mayfair office now, the venerable 77-year-old talks with vigour about the 70s as if it were last week, painting a picture of an industry far removed from that of 2019.

To use a cliche, they were simpler times.

'You nearly killed me!' - from brilliant to disastrous... PR pitching in the 1970s

"Agencies were really about media relations," says Chadlington. "They were about getting the client’s name in the papers – that’s what you aimed for."

Campaigns that succeeded then can seem uninspired now. Chadlington devised one for Beefeater Gin: a national competition for making the perfect dry Martini. "[It was] such an obvious story, but in those days it was unheard-of and it got enormous coverage. The client was delighted when he saw an article in the paper the next day." 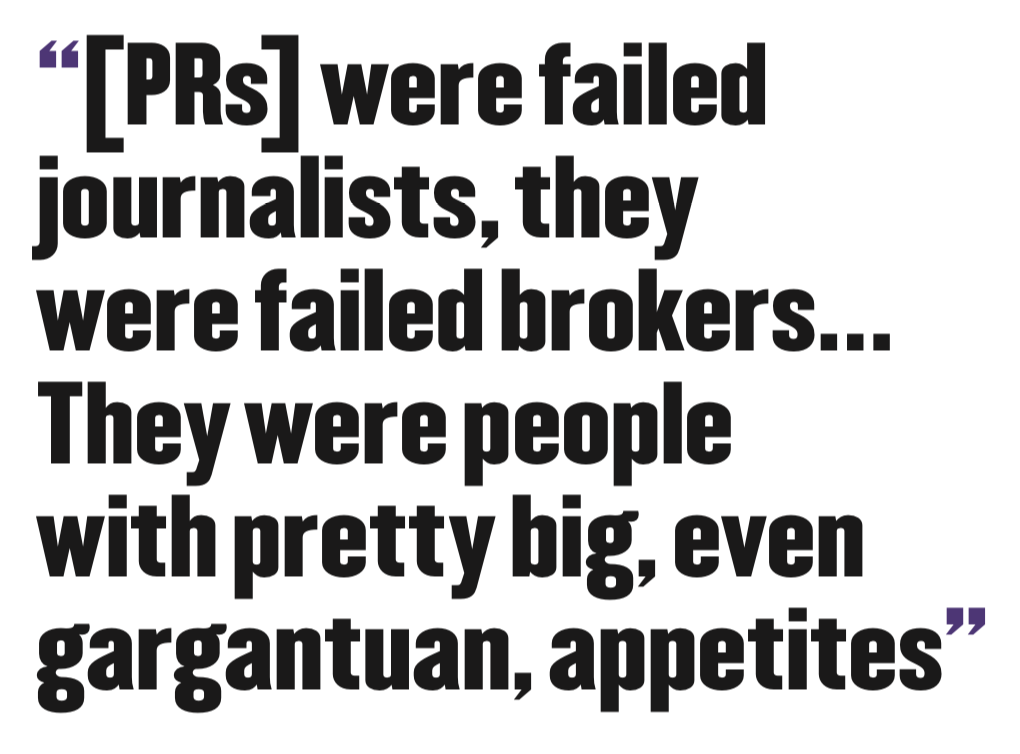 In-house PR chiefs "tended to be much weaker than they are today", Chadlington adds. "They were very lowly paid, tended to be people... who weren’t very good at anything else, and they were there in order to liaise with an agency that brought them skills."

PR also suffered from a serious recognition problem. "The first thing you had to do was explain to a client what public relations was, because they really didn’t know," the veteran explains.

Being a good PR in the 70s was "entirely built around your ability to build relationships", he insists. "If you knew the editor of a newspaper, you knew the writer on the newspaper and they trusted you, they would carry stories."

How accurate is the stereotype of long, alcohol-soaked lunches with Fleet Street hacks?

"That was exactly what it was like," Chadlington states, linking it to a flaw (or, to be kinder, a quirk of character) in the average PR of that era.

"I used to say the only successful people who went into PR had failed at something else – they were failed journalists, they were failed brokers... They were people with pretty big, even gargantuan, appetites. I can think of several PR people who became totally obsessed by that kind of life, and it wasn’t terribly good."

Gin on the agenda

Alcohol was also a theme in agency-client relationships. The marketing director at Beefeater Gin owner James Burrough Ltd would insist on everyone at the regular Friday morning meetings partaking in a gin and water: "It did mean the rest of the day was pretty much a write-off."

Regarding women in the workplace, the sense of a bygone era is even more pronounced.

"There were a lot of what we used to call, in the inappropriate days, ‘dolly birds’," Chadlington says. "These were very attractive, very lively, very nice people to have around. There was nothing inappropriate about how they behaved, but they added glamour to the kind of world we lived in."

He built his business on networking. Chadlington would personally invite senior figures from British society, via letter, to speak to potential clients – and, sometimes, journalists – at breakfast events. Shadow Chancellor Geoffrey Howe and even Prime Minister Harold Wilson accepted.

"We ended up with me building the business entirely on the back of these contacts," Chadlington says.

The peer tells another story that illustrates how dramatically the industry has changed since then.

Pitching solo to Crown Agents, Chadlington was grilled on how the international development organisation could solve a specific problem. He recommended, to stunned silence, doing "nothing at all", then explained why various courses of action would not help. Ten minutes later, he was told he had won the business.

"A few months later I asked [the chairman of Crown Agents] why we had won, and he said: ‘You’re the only person who really thought about our problem – you didn’t go back through all the old stuff that you’ve done for other companies.’

"I think that we are, in this industry today, not concerned enough about reflection and thought – strategic thinking, really worrying about your client’s interests and what they might do, thinking about what the solution is."

The agency landscape was, clearly, a different beast in the 70s. Consultancies were "tiny". Shandwick peaked at about £2m in annual fee income – that’s £8m-£9m today, adjusted for inflation, or equivalent to about one-seventh of the income of the UK’s biggest PR shop, Edelman, in 2018.

Most of the major PR firms were owned by ad agencies, with independents such as Shandwick "regarded as being a bit ‘out there’ because we’d started from scratch doing public relations and nothing else", according to Chadlington.

‘Side hustles’ and rented suits

Shandwick was the first to move toward full-service integration, he says, combining "general PR, government PR and City PR" – a key factor in its success, he stresses.

Meanwhile, retainers were a "normal way of working", with about 90 per cent of Shandwick’s accounts held on this basis. Research by PRWeek put the industry average at 67.5 per cent in 2018.

For Chadlington, the tax regime in the 70s was a killer. The top rate was 80 per cent, rising to 98 per cent for income through dividends.

"By the time you’ve paid auditors and accountant bills, you’re paying 104-105 per cent tax," he says. "It was incredible... the most ridiculous world I could imagine, and it led to all sorts of abuses."

Shandwick would lease suits from a tailor, because leasing was tax-deductible. Chadlington himself even had a ‘side hustle’: writing – under the pseudonym Grant Rashly - to top up his earnings.

"It became stupid, utterly stupid. But we had an enormous amount of fun," he says.