Johnson’s controversial decision to prorogue parliament has been heavily criticised across Westminster, with House of Commons speaker John Bercow slamming the decision as a "constitutional outrage".

"However it is dressed up, it is blindingly obvious that the purpose of prorogation now would be to stop parliament debating Brexit and performing its duty in shaping a course for the country," Bercow argued.

The Prime Minister’s decision to suspend parliament has been met with outrage, culminating in a Stop The Coup protest at Westminster yesterday evening.

However, it is not just the decision to prorogue parliament that is potentially undermining democractic debate.

In making the announcement yesterday, Johnson refused to be held to broad media scrutiny, instead only allowing a three-minute pool clip with three questions from one media outlet, as reported by Channel 4’s news editor Ben de Pear.

So at this stage apparently there will be no interviews with the Prime Minister or any Ministers today - just the "pool clip" with @BorisJohnson given this morning announcing the suspension of parliament in which he took 3 questions in a total time of less than 3 minutes.

None of the Government’s ministers fronted up to media interview requests, and even opposition leader Jeremy Corbyn produced a similar pool clip in facing one of the greatest challenges to parliamentary democracy in recent times.

GPlus partner Emily Wallace says the move is part of a much wider trend in which politicians take greater control over the creation of content and comms channels, effectively enabling them to bypass the mainstream media.

Johnson has already begun doing that with his first live People’s Question time on Facebook on 14 August, where he answered pre-selected questions from the public. As the Guardian’s media editor Jim Waterson pointed out at the time, this allowed him to sidestep media scrutiny safe in the knowledge that reporters would still cover what he had to say.

Wallace points out that Corbyn has also "significantly improved" his digital output and has a strong following (two million) on Twitter.

"As the way that the general public consumes information has changed, all comms disciplines have evolved, and in many ways politicians are behind the curve of advertising and marketing," Wallace told PRWeek.

"I do think there is a real debate to be had about whether this provides the necessary challenge and debate that independent journalism provides. What is the role of national broadcasters in the future and how can more online challenge be facilitated?

"If we want an independent media that provides balanced coverage in the public interest, then I think we will need to actively protect and support it."

Nick Hargrave, a former aide to David Cameron and Theresa May, and now a partner at Portland, believes temporary blacklisting of a media outlet is nothing new.

"The only people with bigger egos than journalists are politicians. I suspect this row will eventually blow over," he said.

"The more interesting question in the years ahead will be whether politicians feel the need to use earned media at all – given they can now communicate directly to voters on social. It's an unresolved dilemma as to whether this is more or less democratic." 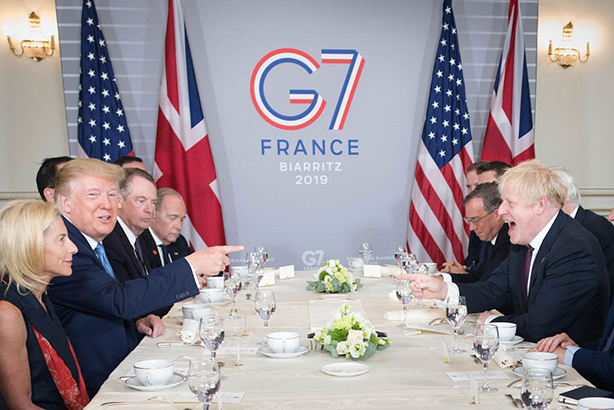 Pagefield chief executive Oliver Foster told PRWeek that although he can sympathise with Johnson’s snub of Channel 4 following Dorothy Byrne’s "extraordinary and unprecedented comments labelling him a ‘known liar’ and ‘coward’", he believes that a communications strategy that sidelines the mainstream media is "ultimately of no benefit to either party".

"The Prime Minister’s aversion to the more challenging broadcast interviews has the short-term benefit of allowing his administration to maintain tight message discipline during an extremely delicate time for Brexit negotiations. And with that, politically at least, I concur," Foster said.

"However, in the longer term, Boris risks being charged with the same accusations of evasiveness and contempt for the British public which Theresa May had levelled at her during and after the ill-fated 2017 General Election."

Across the Atlantic, US president Donald Trump has waged war against the mainstream media, labelling media outlets as the enemy of the people and "fake news".

To an extent, this has helped Trump rally his base, but Foster doubts such tactics could ever work in the UK if the Prime Minister ever went down that path.

"Bickering with broadcasters can be a good way to galvanise support from your base, as we’ve seen with Trump," he said. "However, the British electorate aren’t as tribal as in America – we don’t view our media in the same way as Americans view the genuinely partisan and non-public-service Fox and CNN."

Although it is unlikely any UK Prime Minister would take on the mainstream media, this latest move to sideline media scrutiny is an indication the rules of engagement between the Government and journalists charged with holding them to account may once again have shifted.

Is proroguing parliament a ‘storm in a teacup’?

Above anything else - written constitution please. One that says: an election MUST take place if governing party changes leader mid-term/you cannot 'prorogue' Parliament/HMQ can't decide over Parliament/the people and facilitate the venal desires of a mendacious, Etonian fool. pic.twitter.com/kDII9oLkqR

Astute MD and former CIPR president Sarah Waddington and her husband Stephen, who is the MD of Metia Group and another past CIPR president, were among thousands who attended Stop The Coup rallies across the country.

Although many are concerned the move represents a dangerous precedent that undermines constitutional democracy, Chris Whitehouse, founder and chairman of The Whitehouse Consultancy, said commentary around the proroguing of Parliament is "all a storm in a teacup, with political posturing on both sides".

"In reality, the announcement does not stifle parliamentary debate, rather it sets up parliament to debate the outcome of the European Council at which any deal will be agreed in principle (when the council meets on the 17 or 18 October)," he told PRWeek.

"The new dates are only very marginally different to what was previously expected. The House will now rise on 10 September instead of 12 September and return on 14th instead of (based on past two years) around 8 or 9 October – a total of only four or five actual sitting days ‘lost’."