The Hong Kong protests have divided netizens and the media in the region, especially as demonstrations escalate. Social listening company Circus Social ran a data search for PRWeek Asia, based on popular pro- and anti-extradition bill hashtags used in the region such as #antiELAB, #StandWithHK and #OneChina. 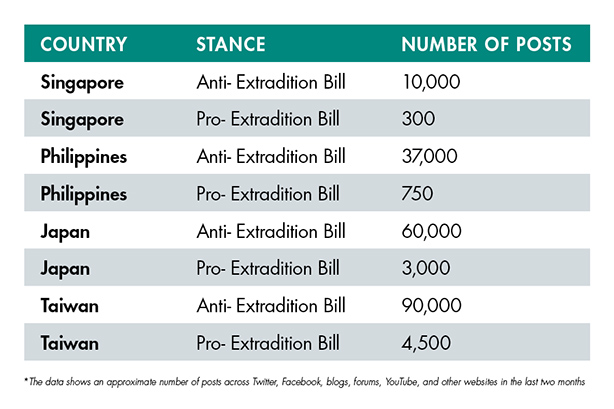 "Our hypothesis is that the majority of the people who support the extradition bill are less vocal about it and do not necessarily share their opinions online," a spokesperson at the company said.

Here’s an overview of how digital media in those markets are reporting the protest:

Despite a high percentage of Singaporeans using anti-extradition bill hashtags on social media, online and print media tell a different story. Singapore – in itself a country that heavily restricts public demonstration – has seen local media scoffing at "violent" protest behaviour being branded as "troublemakers". While not all stories pander to Beijing, the news in Singapore indicates disapproval and apprehension about the purpose and continued escalation of the Hong Kong demonstrations.

The biggest daily broadsheet in the country, The Straits Times, has been covering the news daily, and in print, these stories are often accompanied by front-page images of ‘violent’ scenes paired with terms such as "disruptor", "chaos", and "radicals" in headlines.

Meanwhile, state-owned MediaCorp – the media conglomerate that owns Channel News Asia (CNA) – published an op-ed by Chinese journalist Audrey Jiajia Li who criticised the protests as "decentralised" and "leaderless". In the piece, she also mentioned that protesters should "draw the line at human decency", calling out their violence without any mention of police brutality.

1/ On #Singapore and the #HongKongProtests: This is a comment left on my FB after I shared @limlouisa’s excellent @nytopinion op-ed. It’s one guy w/o a pic but I don’t think he’s a troll + I’ve seen this same sentiment expressed by other Singaporeans so had some thoughts... pic.twitter.com/lmDhjDNKfz

When asked to comment on the protests, Singapore’s Law and Home Affairs Minister K.Shanmugam said: "If China does well, Hong Kong does well, the region does well, we do well. There's no profit in seeing instability. And if Hong Kong is at odds with China, it's a problem for everyone, including us."

He added: "Hong Kong has the huge advantage of China’s support. Singapore has no one to support it. From that perspective, I think Singaporeans say if this happens in Singapore, it will be very troublesome and they are grateful that it is not happening here."

Veteran Singaporean editor Leslie Fong published an op-ed on South China Morning Post, where he strongly argued his case against the protest happening at all. He said in the piece: "Any fair-minded person who has looked at all the available facts about the extradition bill cannot but wonder why there is so much needless controversy over its proposed enactment."

Fong’s op-ed was written in response to a young protester in Hong Kong who held a placard that read: "Don’t let Hong Kong be like Singapore where people live in fear". In the piece, Fong called the young protester "plainly misguided, misinformed and mischievous".

According to Stephen Ortmann, a professor based in Hong Kong, "many Singaporeans do not see protests as a legitimate form of political struggle", and "cannot understand Hong Kong’s struggle for freedom and democracy or against growing encroachment from the mainland". He added that Singaporeans were "taught from school that it is best to follow orders".

So Leslie Fong strikes again. Pls note that he represents more of the estab and people of his generation than ALL Singaporeans. ????‍?? —-> Hong Kong at a crossroads: Playing the waiting game may not work as before https://t.co/IwnGYM3mPm

However, Hong Kong correspondent for The Straits Times Claire Huang has been vocal on social media about slamming Fong’s views on the protests, as well as showing empathy and compassion towards protestors.

Singapore ranks 151 over 180 countries on the global press freedom index in 2018, joining Brunei, Laos, and Vietnam as the lowest ranking Southeast Asian nations.

Compared to Singapore, the Philippines has largely shown solidarity towards Hong Kong protestors – partly because public opinion towards China was soured when a Chinese vessel rammed and sank a Philippine fishing boat on June 9, the first day protests were staged in Hong Kong. Filipinos took to social media to express outrage over the incident, as well as to protest president Rodrigo Duterte’s ‘underplayed’ and ‘mild’ reaction to the incident when he refused to question Beijing in the matter.

Following the incident, the term "Duterte duwag" (translating to ‘Duterte coward’) became a trending topic on Filipino Twitter. Analysts say that Duterte’s non-reaction was because of a fear of provoking a war with China, something the public has perceived as ‘selling out’ to Beijing. For context, Duterte is not one to mince his words, and had in fact threatened war with Canada just a few weeks ago over garbage and toxic waste sent to the Philippines.

Hong Kong millennials: from inspiration to motivation. They showed the world how spontaneous, unorganized but determined dissent can achieve victory over a powerful regime.

With regards to the protests, local users on social media have largely been inspired and motivated by the protests in Hong Kong, citing that a similar movement is needed in the Philippines to drive change. Disenfranchised with Duterte’s soft stance on China, anti-government citizens in Philippines are restless for a change in administration.

Based on English-language news daily The Japan Times, there’s a sense that Japanese businesses and citizens are jittery about financial and safety implications of the escalating protests in Hong Kong and are nervous about violence leading to instability in the region. This means less support in the media for protestors, although this isn’t to say that the stories have been pro-extradition bill.

Based on The Japan News, most Hong Kong stories are from wire services such as Reuters and AFP, but the stories tend to focus on the economic and logistical inconveniences the protests could lead to, including one with the China’s Hong Kong Liaison office’s comments that likened anti-government protesters to terrorists.

Japanese media has also warned its readers about the dangers of travelling to Hong Kong at the moment, following the sit-in protest at the Hong Kong International Airport.

A story on the Japan Times opened with a paragraph that indicated the inconvenience of the airport protest for Japanese travellers: "[It] could not have come at a worse time for people who booked vacations to coincide with the Bon holiday this week," the opening paragraph read.

Separately, Japanese broadcaster NHK reported that Japan's Ministry of Foreign Affairs issued a travel warning for Hong Kong this week, a first since the city's 1997 sovereignty transfer from the UK to China.

On Thursday, Japan raised the travel alert level for all of the territories of Hong Kong from Level 0 (safe) to Level 1 (cautious). The official notice warned Japanese citizens that clashes between the protesters and the police have spread to the airport, metro stations, and shopping malls, and added that "white-shirted gangsters are indiscriminately attacking people on the streets" and "emergency services in Hong Kong may not be able to respond".

Expectedly, Taiwanese media and users have been wary about expressing support for Hong Kong protestors. Newly revised Chinese security laws say that Taiwanese who offer support in the form of funds or supplies to "hostile" regions, including Hong Kong and Macau, may face up to 10 years’ jail and a maximum fine of NT$30 million (US$950,000).

The law was hotly debated when a pro-independence councillor from Kaohsiung was vocal on Facebook about her support for Hong Kong and called for donations of anti-tear-gas equipment. According to reports, she could be one of the first people in Taiwan to face charges under the island’s security law.

In another case, one legislator from the ruling Democratic Progressive Party questioned the "ruthlessness" and "excessive violence" by the Hong Kong police. His post on Facebook was in response to a Chinese editor who said the only answer to the use of excessive violence is to have protestors shot on sight.

The legislator’s post – which included the question ‘do Taiwanese really want to be part of China?' – drew support from locals who posted comments such as "If Taiwan also has a day like this, I will go to the streets without hesitation!"

Based on language used in online English newspaper Taiwan News, it indicates plenty of support for Hong Kong, with even a list of anti-extradition bill protests in Taiwanese cities for locals to attend. Taipei Times, in the meantime, has chosen a more neutral reporting style, with a mix of stories about protestor solidarity and those about ‘chaos’ and ‘disruption’ in Hong Kong.