The campaign was slammed for making several false claims about the council’s involvement in plans for a new concert hall in a leaflet – produced by Fleishman – that was mailed to nearly 6,000 homes.

It purported to be from a community group called Friends of Eastlands, which had an inactive Facebook page and was criticised by a councillor for being fake. The campaign was criticised for failing to disclose that it was paid for by Manchester Arena operator SMG Europe.

The council spent nearly £4,000 on a letter drop to residents to set the record straight.

It is the second case of a PR firm and arena operator using controversial communications tactics, including astroturfing, to try and stop a rival venue from being built. Last month, PRWeek reported that AEG Europe – which is merger talks with SMG – had used similar tactics to oppose a music and entertainment venue in London.

Last week, the Guardian published an investigation that found CTF Partners had used astroturfing techniques in its work for several clients.

The Manchester case is significant because it links astroturfing with a large global PR consultancy, while other recent cases have been carried out by smaller consultancies that are not members of industry bodies and bound by their code of ethics.

The leaflet (below) was sent to thousands of residents purporting to be from a community group called Friends of Eastlands.

Manchester Arena’s parent company SMG Europe and Fleishman were reported by the Manchester Evening News to be behind the leaflet, which broadly criticised plans for a rival concert venue next to Etihad Stadium, and was distributed during a public consultation on the future of Eastlands.

The leaflet claimed Manchester City Council would invest in the new arena and the proposal would increase traffic, pollution, anti-social behaviour, littering and damage, while causing further strain on public transport and emergency services infrastructure.

It said funding for the arena would be diverted away from other council priorities – claims that the council says are untrue.

The leaflet questioned the need for a second arena because the city "is already home to a fantastic arena, which is investing to deliver the best possible concert experience".

The leaflet does not disclose that is had been paid for by the operator of Manchester Arena. 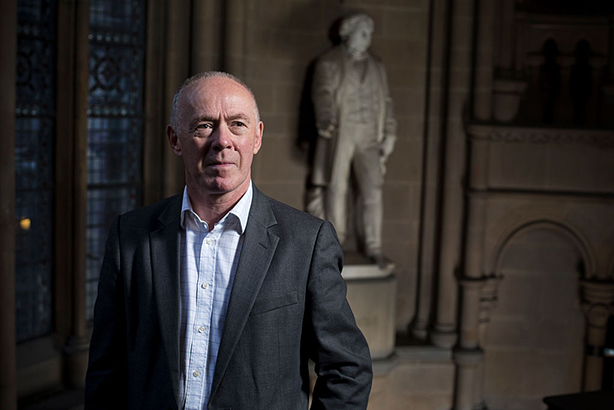 Sir Richard Leese has described the leaflet as 'outrageous' and 'misleading'. (Photo by Colin McPherson/Corbis via Getty Images)

At an Economic Scrutiny Committee meeting in July, Manchester City councillor Sir Richard Leese said the council had not received a formal proposal for the development of the arena and that the council would never invest in such a project.

"They, through a PR agency, circulated a leaflet around Manchester, which I have to say is one of the most outrageous things I’ve seen in a long, long time," he said. "This is something that very dishonestly and misleadingly did impact on the consultation and the responses we got.

"It claims to come from an organisation called Friends of Eastlands, which doesn’t exist. Nowhere does it indicate it was paid for by SMG."

PRWeek has learned that the council subsequently spent £3,944 to produce and distribute 7,870 letters to residents setting the record straight.

In the letter, seen by PRWeek, Manchester City Council chief executive Joanne Roney stressed that no planning application had been received, the council would never fund such a proposal or divert funding away from other council priorities.

‘We were entirely transparent’

Fleishman declined to comment on the leaflet, but told PRWeek "there are a number of agencies and advisers" that work with SMG Europe.

SMG Europe defended the campaign and said it has been "entirely transparent".

John Sharkey, SMG Europe’s EVP of European operations, told PRWeek the operator does not believe there is a market case to support two 20,000 capacity arenas in Manchester, "either from a supply side, demand side or promoter level" and that it had used "independent evidence" to conclude a second arena would cause environmental damage, transportation problems and general neighbourhood challenge.

In terms of the communications tactics, Sharkey said: "At all times, when campaigning locally with residents or groups, we represented ourselves as Manchester Arena. We spoke with local groups who wanted to support the debate and objected to the proposals because of the lack of consultation and impact upon their neighbourhood.

Sharkey said claims in the leaflet were not unreasonable because there had been "a lack of detail" in the Eastlands Regeneration Framework (ERF) consultation document and the operator had considered how councils assist similar projects elsewhere in the UK.

He added: "Manchester City Council do want an arena, as the ERF is their ambition document and the proposal is in there" and "there will undoubtedly be environmental, transportation and local policing capital and revenue issues, which will all have public purse challenges, even if not directly funded by Manchester City Council".

Sharkey said SMG Europe is now satisfied that the council will not be funding an arena project and that Manchester City Football Club would meet any transportation upgrades required.

PRWeek will continue to investigate cases of astroturfing and other unethical comms tactics. If you would like to share a tip-off, please email: arvind.hickman@haymarket.com 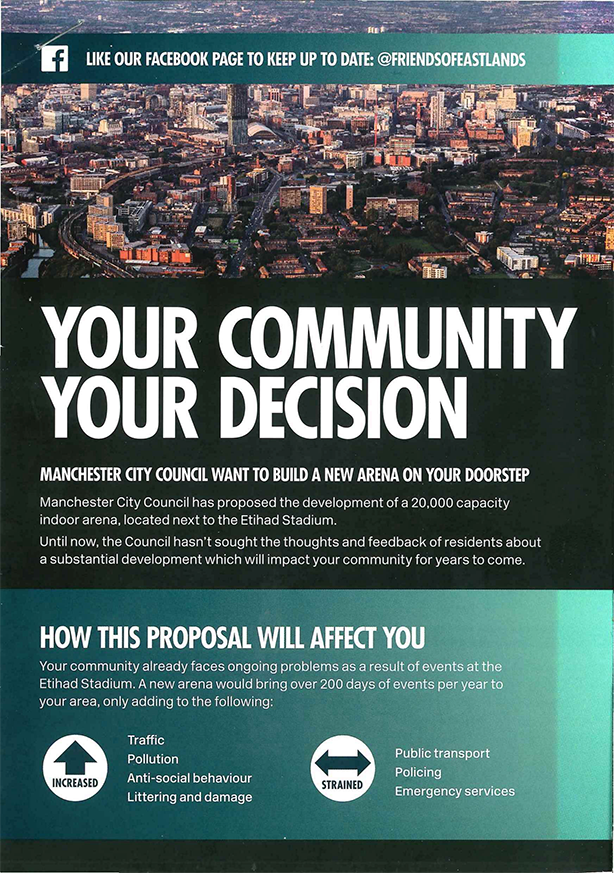 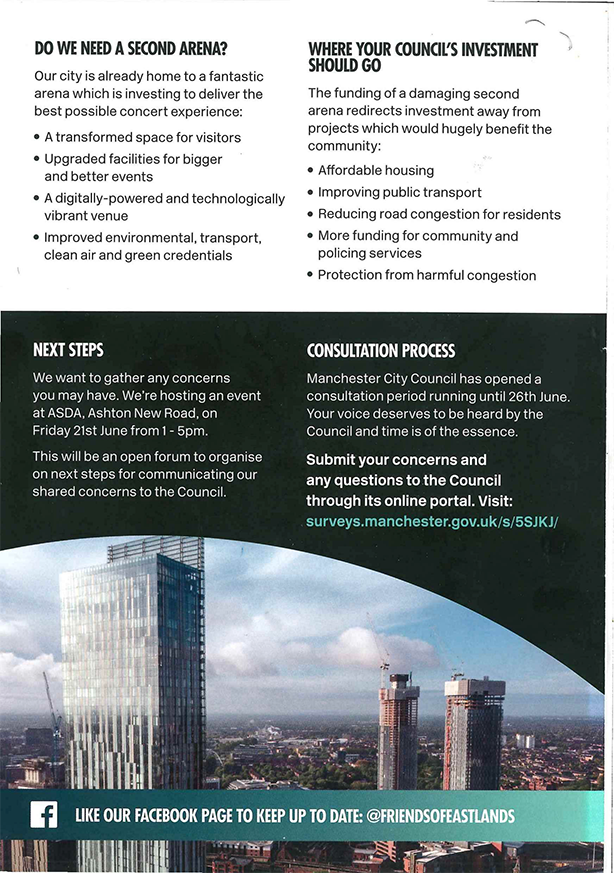