As part of the changes, the specialist information warfare unit, the 77th Brigade, will be among the elements of a new 6th Division.

The restructure to confront what the Ministry of Defence has dubbed "evolving threats" comes in the wake of the government’s national security capability review last year, which stated that comms "must be part of the frontline of our defences".

A rebalancing of the army is needed to "ensure that it can compete with and defeat adversaries both above and below the threshold of conventional conflict", the MoD said.

He outlined how three British Army divisions would harness the wide range of the army’s capabilities.

These include the 3rd Division, a "world-class warfighting force" and the 1st Division, which "provides specialist soldiers and equipment to develop other nations’ armies, deal with disaster and humanitarian crises worldwide and enable our warfighting division."

They will be joined by the 6th Division, which "focuses on Cyber, Electronic Warfare, Intelligence, Information Operations and unconventional warfare through niche capabilities such as the Specialised Infantry Battalions."

Lt Gen Jones warned: "The speed of change is moving at a remarkable rate and it will only get faster and more complex."

The reconstituted 6th Division – which was last deployed in 2011, when it was sent to Afghanistan – will provide the army’s "asymmetric edge, orchestrating Intelligence, Counter-Intelligence, Information Operations, Electronic Warfare, Cyber and unconventional warfare," according to the MoD.

Based at Upavon, Wiltshire, it is the Army's first dedicated information warfare formation and consists of the 77th Brigade, the 1st and 11th Signal Brigades, 1st Intelligence Surveillance and Reconnaissance Brigade, and the Specialist Infantry Group.

The 77th Brigade, a core part of the new division, was set up in 2015, amid mounting concerns that Britain was facing an increasing number of cyber-attacks and disinformation campaigns by Isis and other terror groups, and hostile states such as Russia. It includes web specialists, a content team, an information warfare team, combat camera teams and comms operations officers. 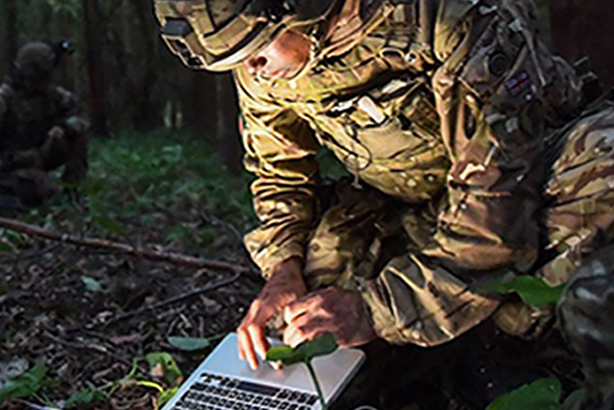 General Sir Nick Carter, chief of defence staff, speaking last year, said the brigade provides "the capability to compete in the war of narratives at the tactical level."

Writing in the Daily Telegraph last week, Major General Jonathan Shaw, a former director of Special Forces, commented: "In today’s battlefield, the military are minor players in a game in which most of the skill set and capability is civilian. The real experts in this field do not reside in the British Army and, as a nation, we will have to do more to ensure we make use of civilians’ skills."

He added: "The information campaign needs to be civilian-led, and in this context it seems unnecessarily restrictive of the Army to insist its cyber recruits can still pass military fitness tests."