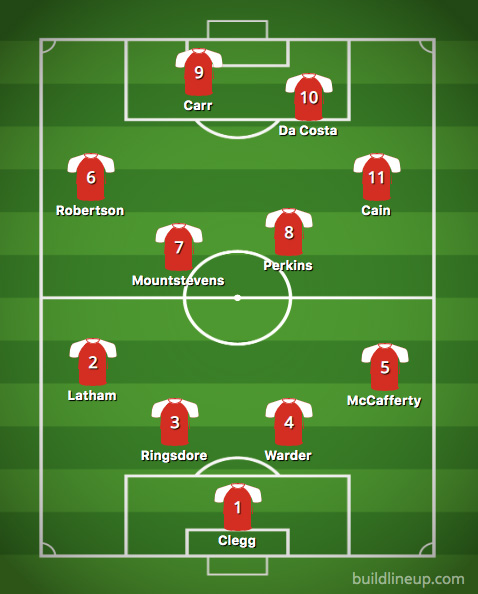 So you've seen the new line-up. Based on that and the player biographies below, we need you to select our captain – click on who you think is best qualified to lead our team and share with your PR industry colleagues.

Da Costa is recalled to her familiar Number 10 role after a productive spell at Cicero. New gaffer Johnson will be hoping she can ‘aide’ Dynamo's push for promotion with plenty of goals and assists. A productive partnership on the right with Cain is expected.

Prolific and creative, Hope&Glory’s co-founder and managing partner Carr is a pure poacher (of top clients) and could provide the firepower to shoot Dynamo to the top of the table.

The first of our creative midfield duo, Mountstevens can find his way through opposition defences as easily as he finds his way to a PRWeek Award.

Our second creative linchpin, Perkins offers an abundance of experience in the centre of the park. Does W stand for ‘winner’? We hope so.

Robertson is a formidable presence on the left, always ready to support her creative colleagues. Currently on mat leave but certain to come back all guns blazing later in the season.

As a journalist at The Mirror, Cain dressed as a chicken to taunt Tories in the run up to the 2010 general election. So we’ll put him on the ‘wing’ - where he can serve the Number 10.

The Chinese brand's latest comms recruit was no doubt brought on board to help defend (its reputation) in Europe, so she's an obvious choice to anchor Dynamo's rearguard. A smart(phone) acquisition.

Dynamo hopes ‘ruthless’ Ruth Warder will transfer her mastery of consumer PR at the UK’s biggest PR shop to mastery of keeping opposing attackers at bay.

Never afraid to go forward, this former senior advisor on Hillary Clinton's 2016 campaign and ex-Freuds director is one of only a few American transfers who can boast of a successful career on both sides of the pond. This Royal recruit will help take the media attention off her teammates.

McCafferty went to MSL after a spell on the sidelines. Technically gifted, the ex-Karmarama man likes a challenge and whipping balls into the (creative) box.

We admit it - recalling the former UK deputy PM from Silicon Valley is a risk, given the tidal wave of issues facing the social media behemoth shows no signs of disappearing. We’re pinning our hopes on Clegg revisiting his glory days of the 2009/2010 season, when ‘I’m with Nick’ became a rallying cry akin to a football chant. Oh, and he's the 'world's most powerful PR player'.

For our replacements' bench, Dynamo has picked some PR chiefs who have recently announced their departures, will be hungry for the next challenge and, more importantly, ready to enter the fray at a moment's notice...

Frohlich has been unafraid to shake things up as CEO of the newly merged Ogilvy UK, and his qualities will come in handy to guide Dynamo PRWeek to glory.