NEW YORK: The pace of PR agency mergers and acquisitions is up this year with the most popular acquisition targets being independent shops with annual revenue under $6 million.

There have been 29 deals in the six months ending in June, compared to 23 for the same period last year, according to the Midyear M&A Analysis and Report from the law firm Davis & Gilbert.

The report found that 65%, or 19, of the deals involved independent buyers and 50%, or 14, of the purchased firms had annual revenue $6 million or less.

"My takeaway is that the M&A market continues to be robust," said attorney Brad Schwartzberg, partner and co-chair of Davis & Gilbert’s corporate practice. "Really what has transpired over the last couple of years is that the largest volume of M&A has been at smaller firm level." 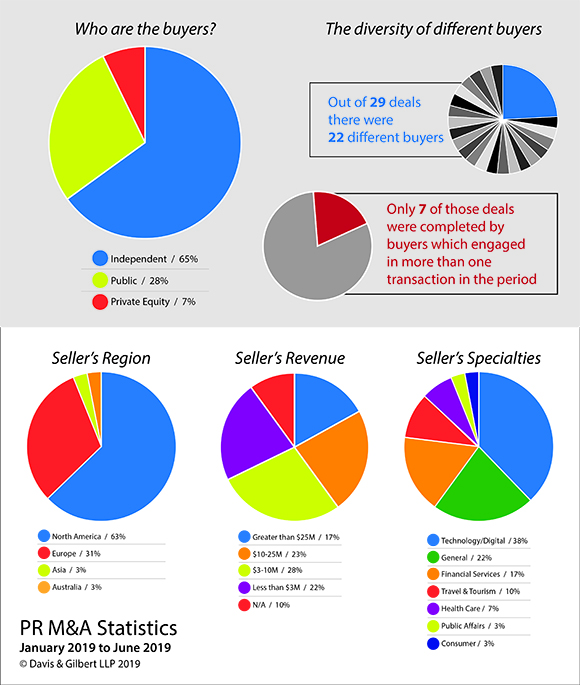 In the past, the ability to use mergers as a tool for growth was only available to larger firms, said Schwartzberg.

"Historically, there wasn’t much opportunity for firms in the $3 million revenue range," he explained. "But the emergence of several independent buyers looking to supplement organic growth means people are looking at smaller, strategic M&As."

Schwartzberg said medium-sized independent shops are the ones largely buying smaller shops because the deals don’t pencil out for the holding companies. In addition, he said, the mid-sized shops often know the firms they’re acquiring.

"Independents are saying if these things are priced properly, we’ll pick them up," Schwartzberg said. "We know them personally, we’ve worked with them in the past and so we like them as firms and we like them culturally."

While small independent shops comprised the bulk of M&A activity so far this year, the numbers were up for larger firms as well.

"There was a meaningful increase in larger deals in the first six months as well, said Michael Lasky, partner and chair of Davis & Gilbert’s PR practice and co-chair of its litigation practice.

Five firms with revenues greater than $25 million were sold in the first six months of this year, compared to only one for the same period last year, according to the survey.

Lasky said the report was based on data from deals in which Davis & Gilbert represented a buyer or a seller, as well as on publicly available information about deals in which the law firm was not involved.