The Atticism, a boutique Australian-headquarterd shop with an office in the UK, realised clients were wasting thousands of dollars on an influencer ecosystem rife with fakery and that staff were spending too much time on social media rather than traditional PR.

It still advises on how they can improve their own social activity, but won’t manage social media channels, telling clients: 'We don’t post images to your social feeds. We don’t boost posts or go hunting for likes and shares… in fact, we don’t even want your social media logins.'

The move bucks an industry trend in which agencies are turbo-charging their social and influencer outputs and pouring more money into influencer campaigns and their own social media channels.

The agency, which has eight staff, had scaled up its social media and influencer offering in early 2018 due to increasing client demand, but half a year later ditched it altogether.

The Atticism founder and director Renae Smith told PRWeek that when she analysed how her staff were spending their time, about 80 per cent was allocated to social media and only 20 per cent on traditional PR, "which no client was ever happy with".

Smith took the decision to cancel all of the agency’s social media work and focus on the core discipline of PR – and says she saw "the writing on the wall" for an industry that has been riddled with data privacy and brand safety scandals, with one major platform, Instagram, now trialling the removal of ‘likes’ from photo posts.

"We took a huge hit initially; our billings per month had dropped by more than half for a few months," she said. "I was freaking out, but by February the clients that were starting to come to us were much more high profile, including the wholesaler of one the largest telcos and a major developer in Hong Kong.

"They’ve come to us purely for PR – which makes me feel good, because I believe in the power of PR and it works. We are now doing better in terms in billings than where we were before."

The reason why The Atticism ditched social media wasn’t purely down to a drain on resources; Smith said social media campaigns – including influencer work – wasn’t effective for what clients were looking to achieve.

A reason for this is the industry’s use of vanity metrics, such as likes and followers, to measure success.

"I was working with the largest toy importer in Australia and they were throwing so much money at us for doing [social media work]. Even though I was ticking all the boxes in terms of numbers, I thought, ‘this is such a waste of money’," Smith explained.

"The client said they wanted 1.7 million eyes on their toys, and on YouTube they want 10,000 views of their video ad and other things. We would go to an influencer programme and find micro-influencers, as well as larger ones with 50,000-100,000 followers. The influencers would be sent toys and take photos with toys in posts, which helped the campaign exceed its targets in terms of ‘views’ and ‘likes’.

"But I knew I was paying for fakery. All of the influencers were watching each others’ posts and comments. When they had 30 comments, it was the same 30 people commenting on each other’s profiles."

A recent study by HypeAuditor found a majority of UK Instagram users are involved in some form of fakery.

Another study, by Trustinsights, that analysed 1,430,995 Instagram posts from 3,637 brands over six months, found the average engagement rates with brand posts dropped from 1.1 per cent in January to 0.9 per cent in July.

In an examination of 150 fashion influencers, there was a maximum engagement rate of 4.3 per cent engagement in February and a minimum of 2.4 per cent in June – which is a 44 per cent decline over the period (see chart below). 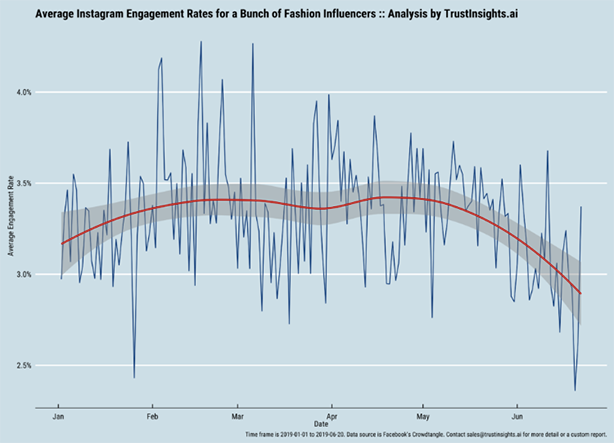 The research highlights the fallacy of using influencer audience sizes as accurate measures for reach and engagement.

Poor engagement rates weren’t the only consideration that had led Smith to ditch influencers.

"The other thing I noticed is influencers had followers from all over the world – people from Turkey, China, all of these different countries that are never going to buy a shop in Australia," Smith added.

"It made me contemplate why I’m taking thousands and thousands of dollars to feed back into this system that is propping up the fakeness of it all. Although we were getting money and hitting targets, I knew the results weren’t doing what the client wanted and I knew they wouldn’t be selling more toys."

Although The Atticism has refused to work with influencers for 18 months, it seeks out people who are respected by their peers or industry as thought leaders, rather than being "Insta-famous".

"Collecting likes is not influential and we try our best to explain this to them," Smith said. "Unless someone actually influences an industry, a subject or a group of people, they have no reason to be called an ‘influencer’."

The Atticism’s decision to ditch social media work may not feasible for larger agencies, but it raises further questions about the integrity of the influencer ecosystem and power of traditional PR.