Huddersfield FC and its new sponsor Paddy Power have gone from national laughing stock to marketing geniuses in a few days.

On Wednesday, the club revealed its new kit with an obnoxious sash logo and Paddy Power emblazoned across the front.

The garish outfit caused the media, fans and the Twittershere to go into meltdown with the Daily Mail’s sports reporter Ian Herbert describing the club as "a laughing stock" that has "sold its soul".

Compounding matters, the strip made its debut in a friendly match against Rochdale at the Crown Oil Arena on Wednesday, further stoking the flames of outrage that the commercialisation of football had officially gone mad.

The Football Association contacted the club to remind them that the new design did not meet official guidelines.

Eagle-eyed football fans suspected the whole fiasco was another elaborate PR stunt by a serial marketing prankster – but few could have predicted what happened next.

A couple of days later, Huddersfield confirmed the hoax by revealing its genuine 2019/20 kit with Paddy Power’s logo nowhere to be seen.

"Paddy Power wants to be the only bookie not to be on football shirts. Last season the number of bookies on shirts was staggering," Paddy Power head of PR Lee Price told PRWeek.

"The mass sponsorship of football clubs has gone mad – you’ve got noodle brands and Angry Birds and so on. The best way to sponsor a football shirt is the unsponsor it. If Paddy Power wants to get involved in sponsorship we want to turn it on its head, do something for the punters and be true to Paddy Power."

The bookmaker has launched a ‘Save Our Shirt’ campaign, a concept created alongside its agency partners VCCP and Octagon. It wants other betting companies and shirt sponsors to follow suit.

Betting companies are shirt sponsors for half of the Premier League teams with the biggest deal Betway’s £10 million sponsorship of West Ham.

Paddy Power’s deal with Huddersfield, which was relegated to the Championship this year, is likely to be a much more modest outlay, but Price said it is similar to other standard shirt sponsorship deals for a comparable club.

"It’s a very standard shirt sponsorship deal but does include some additional incidental assets like a page advert in the matchday programme and eight minutes of LED perimeter board space," he said.

Part of the value Paddy Power receives is access to Huddersfield's players and manager. Price said the hype generated by the stunt and earned media for Save Our Shirt campaign is an important part of the value of bookmaker expects to generate from sponsorship.

"We did a lot research into and the reason why a lot of football shirt sponsors are based in China is that a huge part of the value for that (front of shirt) space is the international audience," he explained. "Obviously, Paddy Power isn’t an international brand so even if we did a straight sponsorship, we’d still be losing a certain percentage of the sponsorship  of that space.

"For the budget we had, which wasn’t huge, we thought this campaign would deliver enough bang for its buck as a marketing campaign to not worry about the loss of value [of no logo exposure]. It’s always hard to quantify marketing and PR value but we felt the balance is right here."

Paddy Power said it will have other activations throughout the season to keep momentum and talkability going.

This kicks off at the first game of the season – a Monday night fixture against Derby. The bookmaker is offering fans a ‘shirt amnesty’ where they can trade in last season’s jersey for a new one.

Price admits the carefully planned stunt was risky and there could still be some Huddersfield fans who feel like they were "the butt of the joke".

"That was obviously never our intention, the target of this campaign is the big brands who are just labelling clubs. That’s why we are doing things like the shirt amnesty to let Huddersfield fans know we are on their side," he added.

He also admits that some club officials were "slightly panicked" when the FA contacted them, but the pay off from an earned media perspective has been huge.

The stunt was picked up by all of the nationals and even achieved the "BBC Sport hattrick" of three top stories, which is all the more impressive from a broadcaster that is "loathe to read our emails let alone use pictures of our brand".

"In terms of campaign launches and earned media, we are slightly blown away by how well it has gone." Price said. 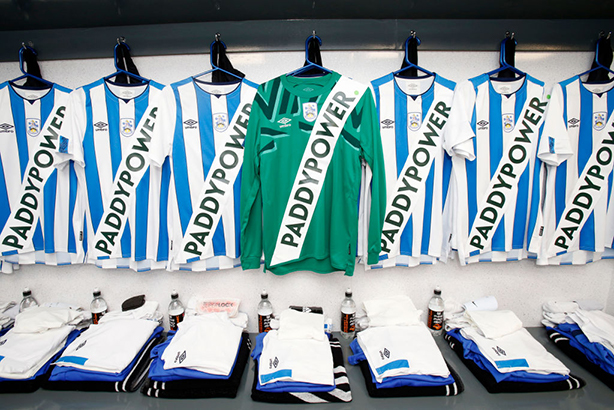 'They've ripped up the rulebook'

"Paddy Power has very cleverly positioned itself on the side of those ramping up the pressure for greater legislative change which would see betting brands outlawed from the shirts of football clubs, whilst at the same time becoming the most memorable shirt sponsor around," he said, pointing out that most of the betting shirt sponsors do very little else other than sticking their logo on a shirt.

"Paddy’s Save our Shirt campaign has ripped up the rule book of shirt sponsorship championing a return to unbranded football shirts," French said.

"Barcelona earned a heap of positive publicity back in 2006 when they donated their shirt to Unicef but I suspect even that failed to deliver the headlines and comments delivered by Paddy’s announcement this week."

Neil McLeod, head of strategic communications at The PHA Group, said the beauty of this well executed campaign is in the risks that it took.

"The risk of incurring the wrath of the fans – who have already suffered relegation – is monumental. Normal kit launches have a degree of risk in them with the main fear being how well a kit will be received," McLeod said.

"We’ve seen some very bold, smart and integrated football campaigns in the past. This one played Russian Roulette with the fans’ relationship with the club and Paddy Power itself, albeit for just a few days. It was so well pulled off that the club actually played a game in the kit and the FA issued a statement about rule breaches concerning advertising."