Four goals from star striker Kieran Watkins and a hat-trick from captain Dan Glover led a clinical performance, but the hero of the day was keeper Tom Roche, who repelled CIPR rockets time and again to scoop player of the tournament honours.

The event, sponsored by markettiers4dc, helped raise £3,500 for the Taylor Bennett Foundation, which helps train and mentor talent from BME backgrounds to help them carve out a career in communications.

The tournament pitted 15 teams (16 before a late withdrawal) into four groups followed by finals. 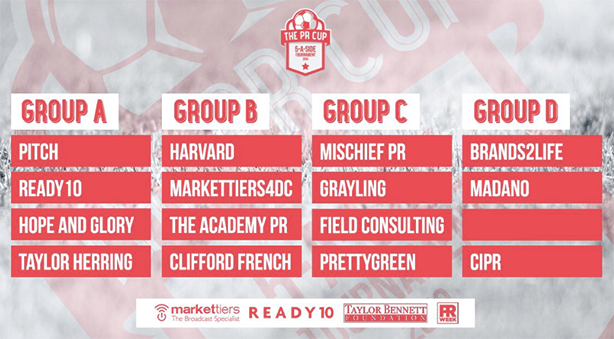 The Academy’s campaign kicked off slowly – quite literally – being made to wait for 20 minutes by Clifford French, who then inflicted a 1-0 defeat.

But they gradually improved as the tournament progressed, drawing with an impressive markettiers4DC outfit, and then edging out the sponsors on goal difference to book their place in the final, inspired by the impenetrable Roche and top marksman Watkins.

The same cannot be said for Ready10, which helped put on the event, losing their star player Dan Mason to a knee injury a couple of minutes into their opening game.

PrettyGreen were also shaping up as serious contenders: swatting aside Field Consulting 17-3 before putting Mischief to the sword 24-6 in a game where a goal was scored every 40 seconds.

Mischief began the tournament with three players who had never played football, while the Taylor Herring team sported ginger wigs in the first game before thinking better of it on a warm afternoon.

Other teams that booked a place in the quarters included the CIPR, PrettyGreen, Clifford French, Pitch (another early contender), Grayling, Madano and Hope&Glory.

In the quarters, Clifford French drubbed Grayling 16-2; Hope&Glory – inspired by the mighty Liverpool against Barcelona – overturned a 0-3 half-time deficit to overpower Madano 6-3; CIPR edged Pitch 4-2 in a match that could have gone either way; and The Academy came back from 4-1 down to take PrettyGreen to a penalty shootout before prevailing.

The semis produced surprisingly one-sided affairs, with CIPR crushing Hope&Glory 8-1 and the The Academy inflicting revenge on Clifford French in a 6-0 whitewash.

The final was even for most of the first half, but The Academy’s fitness, organisation and clinicality helped them edge ahead at half time while the CIPR ran out of legs, with star defender Martin Ofosu-Appiah succumbing to injury, only to bravely return later on in vain. Martin and brother Emmanuel – a Taylor Bennett Foundation graduate – both starred for the CIPR in the tournament, but tired legs cost the industry body.

The final score perhaps flattered the victors while the game threatened to boil over late on, but few can deny The Academy their ultimate glory. They were the best organised and drilled team on the day, with a strong spine and every player contributing.

"It was such a pleasure to take part in Friday’s tournament and raise money for a brilliant charity. We are really proud of the team, and so happy to have brought the trophy home, too," The Academy founder and CEO Mitch Kaye told PRWeek.

"Everyone played their part, led by co-Founder Dan Glover who defied age to show there is no challenge which can’t be solved using creativity. On what turned out to be one of the greatest weekends of sport in London’s history, it was The Academy that kicked it off."

Markettiers4DC founder and CEO Howard Kosky was delighted with the event.

He told PRWeek: "Congratulations to all involved in the inaugural PR Cup. It's a great event, which not only helped raise funds for the Taylor Bennett Foundation, but was thoroughly enjoyed by all who took part. Here’s looking forward to it growing as a participation event next year, with more mixed teams."

Taylor Bennett Foundation chief executive Melissa Lawrence added: "This fundraising event was a first of it's kind for the Taylor Bennett Foundation and we were honoured to be the chosen charity benefiting from the donations . The money raised will enable us to continue working towards our mission of encouraging black, Asian and minority ethnic (BAME) candidates to consider a career in PR and communications."

Plans are now underway to expand The PR Cup concept to the North, as well as putting on a netball tournament.

A big thanks must go out to Markettiers4DC, Ready10, the Taylor Bennett Foundation (and PRWeek) for putting on the event and all the teams and players who took part and put on a wonderful spectacle.

Visit @ThePRCup on Twitter to see highlights of the day, below is a selection.

All the pain, sweat and heavy legs are worth it for bringing home @ThePRCup. What a Friday. pic.twitter.com/0OqNaTfQ9D