If you take away anything from this story, let it be this: TikTok is not a music app geared toward teens.

The app’s head of global marketing, Stefan Heinrich Henriquez, says his biggest comms challenge is making sure people understand that.

"Consumers’ perception of the product must meet reality," he says.

The confusion stems from the fact that TikTok, a home for user generated short-form mobile videos, used to be lip-synching app Musical.ly. Last August, Musical.ly rebranded as TikTok, after being acquired by Chinese company ByteDance in November 2017.

"The community has been moving on from that type of content since more than a year ago," says Henriquez. "We renamed the product last year because we saw that the content is so diverse and we have new top communities and all kinds of content genres, similar to what you see on YouTube."

His definition of TikTok: instant, personal TV. To differentiate its platform from others, TikTok has been leaning into the fact that attention spans have fallen from 15 seconds to 8 seconds.

"We enable people to tell stories in a very short amount of time and we give people excitement, surprise and delight in a few seconds," explains Henriquez. 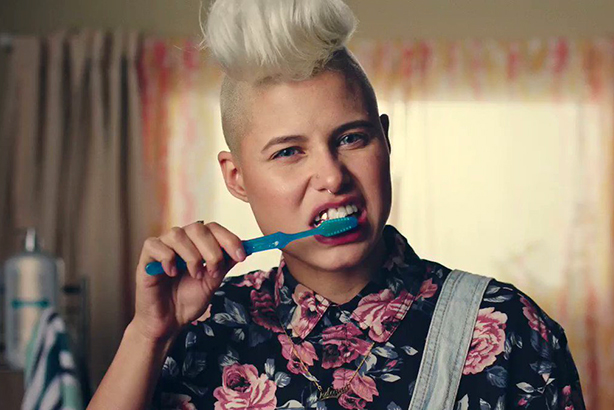 A screenshot from TikTok’s #ImaDoMe campaign, which reached over 1.3 million views on YouTube.

In 2018, TikTok rocketed to the top of Apple’s App Store and racked up a record 3.8 million first-time downloads in October. Henriquez says that people are getting social media fatigue because of all the negativity on platforms such as Twitter and are now gravitating to TikTok, which is a "happier place."

There has been a major consumer behavior shift, notes Henriquez. Over the past 10 years, people have been educated to search with Google and social media sites. But TikTok gives users content based solely on an algorithm powered by AI, often displaying the most recent viral videos that have emerged on the platform.

"You don’t have to give input in terms for searching or click on a category. AI can figure that out based on your behavior, so in that regard, we are moving from lean in, back to lean back," says Henriquez.

Based on how long someone watches a video or if they like it, AI learns and serves the user more of that content.

"People watch based on their own interests, not based on what their friends like or who they follow or who they pretend to be and how they want to be perfect like other social media sites," explains Henriquez.

TikTok is also a bit more democratic than other social media platforms, which have historically rewarded people who have "gotten in early and now have huge followings." With TikTok, any user has the chance to go viral, regardless of the number of followers they might have.

Henriquez’s marketing team, made up of 25 staffers, "breaks the rule" of having a strict one-year marketing plan.

"[We don’t want to be] too defined by a long-term marketing plan or brand guidelines that cannot be disrupted," he says. "As long as we have core key values or a certain style we want to portray for the world, that is most important."

In response to allegations that TikTok has been illegally collecting private information of children using the app, parent company ByteDance agreed to pay the Federal Trade Commission a $5.7 million settlement in February. Shortly after that, the U.K.’s Information Commissioner’s Officer began investigating TikTok over child data use. Henriquez declined to comment on the matter.

TikTok’s marketing strategy is dependent on rigorous market segmentations, research, talking to users and potential users, and looking at the behavior in the app and the data it has to understand who has the highest affinity to use the product, says Henriquez.

Marketing strategies for the app are extremely localized. Even just in the U.S., there are so many different people and communities, says Henriquez.

"Communities are connected. If you are a gamer in Brazil, Japan or Germany, it doesn’t matter. You still connect. People are much more connected by interests now than by geographies."

Henriquez’s team jumps on trends and creates compilation videos of users taking part in the latest challenges and then posts them to other social networks. TikTok also created a video promoting its #ImaDoMe campaign that encourages users to "make every second count" by being creative with the app. The video received more than 1.3 million views on YouTube.

American Idol recently did a hashtag challenge on TikTok that was used 37.2 million times. And in February, Calvin Klein introduced its spring campaign, #MyCalvins, on TikTok as well as on other paid media channels.

"As a marketer, when you do social today, you get views, impressions, comments and likes," he says. "With TikTok, you get video [replies]. In terms of engagement, that is crazy."

By commenting on a brand campaign via video, TikTok users all then become microinfluencers, with the content then going out to their own group of followers.

"The video comments turn users into brand ambassadors at scale," says Henriquez. TikTok’s app makes it accessible for anyone to make a video, not just those with a creative background.

Over the next year, Henriquez is focused on growing TikTok in terms of content and having different types of creative people on the platform.