Millennials may be the "avocado generation," but older cohorts could soon be warming to the buttery fruit du jour — and yes, it’s a fruit.

"When I started, that was one of the big things we changed," Luque says. "Our biggest opportunity is in the older millennials and young X-ers. These guys have money and they need a healthy product."

The Mexican Hass Avocados Importers Association (MHAIA) and The Avocado Producers and Exporting Packers Association of Mexico (APEAM) pooled their resources to create Avocados From Mexico in 2013 as its marketing arm in the U.S., located in Irving, Texas.

A marketer by trade, Luque came to the organization in late 2013 from corn flour and tortilla manufacturer Gruma USA, where he was marketing VP for its Mission Foods portfolio.

At a time when most produce companies advertise the same story — blue skies, green fields, water — Luque’s hire was seen as a "bold move," he says. It belied Avocados From Mexico’s origins as a marketing organization with a CPG focus.

"We wanted to do something completely different," Luque added. "We wanted to be a Pepsi or Coca-Cola type of brand in the produce world."

In the years since, Luque has presided over an "aggressive" marketing strategy on behalf of MHAIA and APEAM, including its much-publicized Super Bowl spots.

With more than a dozen agencies on retainer in the U.S., AFM receives media support from Havas, creative from BBDO and PR from Padilla, which was named AOR in May 2019 after the group ended its long-standing relationship with Ketchum.

For such a lean organization (about 30 people on the ground), Avocados From Mexico commands a significant budget. Its marketing spend is dictated by the amount of avocados imported to the U.S. (2.2 billion pounds), which equals almost $60 million.

"We wanted Padilla to come in because we needed new blood, new thinking, more dynamic conversation," Luque says. "Also, we wanted to make sure they could look over the whole business, because if you go back a year or so, we were only doing consumer PR with Ketchum. We want Padilla to take our food service PR, shopper PR, digital PR and consumer PR under one single organization."

With 85% market share, Avocados From Mexico sees no opportunity in the remaining 15%. Instead, future growth will have to come from expanding the category itself.

For example, most households consume three avocados per month, a meager sum when you consider you need four or five avocados just to make guacamole for a party, Luque says.

To expand the avocado category as a whole, Luque wants to find new ways of integrating the fruit into Americans’ everyday diets. He wants to wean Americans, such as Generation X, off other fruits and get them hooked on avocados.

"If you want to move the needle in the avocado world," Luque says, "it’s about going back to basics." 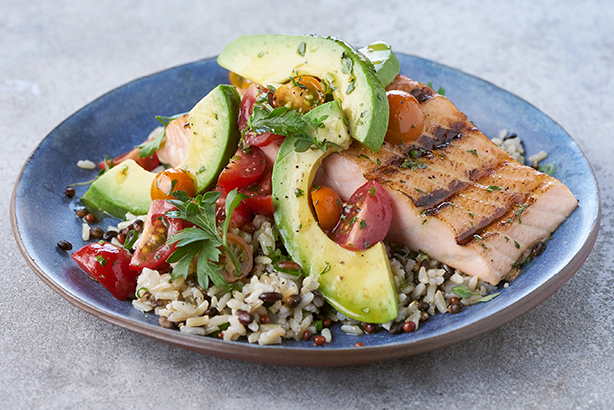 The segment Avocados From Mexico has targeted most heavily is the American handheld. Market penetration is only 8%-9%, representing "huge" opportunity for growth, Luque says. For the past three years, the organization has poured 80% of its promotions toward traditional handhelds.

"In food service, you have to inspire chefs," Luque says. "We see a lot of innovative thinking in recipe development. We try to bring that chef mentality and passion to our brand."

This has rendered some truly creative innovations, ranging from the inspired to the unorthodox (see: avocado latte).

Luque says he tried one brownie recipe where the butter in brownies was swapped for avocados.

The experimental palette has also translated into the digital world. In 2018, the organization rolled out shoppable recipes on its website, a first in the produce industry. The feature allowed users to browse recipes and purchase ingredients from Amazon-Fresh and other distributors. In effect, the add-on bridged the gap between website and e-commerce, Luque says.

Avocados From Mexico has been keen on developing omnichannel experiences. Luque ranks omnichannel in its top five priorities for the year.

For the past six months it’s been testing promotions for Whole Foods and Amazon, while also leveraging its relationship with Walmart, Luque says.

The group has been developing a chatbot exclusive to Walmart for the past two years to educate consumers on all things avocado, including when and how to pick them, Luque says.

The company partnered with Budweiser, Tostitos, Smithfield and Tabasco on promotions and recipe development. Every time it does a promotion with a partner, it splits the costs 50-50.

When rhetoric around a potential U.S.-Mexico border shutdown ramped up in April, reports flooded the media saying the U.S.’ avocado supply would run out in less than a month.

Unshaken in his belief that APEAM and MHAIA will resolve the issue, Luque says the fears are "totally" overblown.

There’s been little sign avocado imports have been materially impacted either. Sales data in the lead-up to Cinco de Mayo, for example, trended upward, Luque says. "The three weeks before, we were trending around 150 million pounds, a 14% increase over last year," he added.

While Avocados From Mexico, MHAIA and APEAM dominate the U.S. market, they also realize it may be prudent to diversify their revenue streams. They’ve established a foothold in other countries, Luque says. In Japan and Canada, it boasts up to 95% market share. APEAM and MHAIA are looking at ways to expand the avocado category in those countries as it did in the U.S.

"They would love to," Luque says. "Unfortunately, [Avocados From Mexico] can’t do it, but there are a lot of materials and assets from our organization they [APEAM and MHAIA] can use in Japan or Canada, using the marketing people in Mexico."