It exposes a platform where the majority of influencers artificially boost vanity metrics that marketers often use when choosing influencers, including followers and engagement. The Insta fraud is estimated to cost marketers close to $750m globally in wastage in a market now worth about $1.7bn (see below).

In the UK, the study found nearly 10 million accounts are fake. The three markets with the most fakes are the US (49 million), Brazil (27 million) and India (16 million). 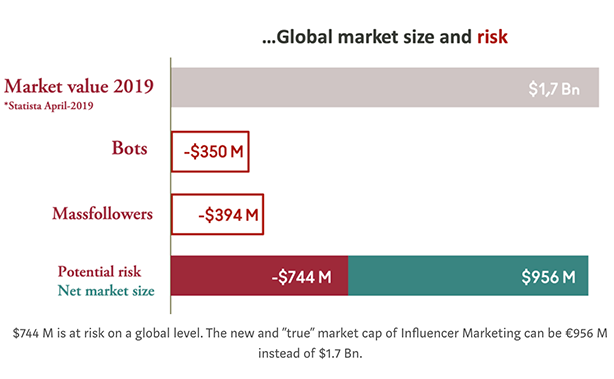 The proportion of accounts in the UK that have either bought followers, comments or used engagement bots is 54 per cent, below the US (60 per cent) and the world average (57 per cent) – (see breakdown below).

In addition to the quantitative analysis, the study carried out an anonymous survey of about 400 influencers to find out if the figures matched up with what influencers admit to doing.

These results showed that more than 60 per cent admit to either using engagement pods, bought followers, likes or comments at some point, and that one in five intend to continue doing so.

A Good Company CEO and co-founder Anders Ankarlid told PRWeek: "Our numbers show that in the UK, as many as 10 million accounts are fake. This has significant implications on the de facto market value."

"Companies are pouring money into influencer marketing, thinking that they are connecting with real people and not Russian bots. In reality, they are pouring money down the drain and giving away free products to someone who acquired a mass-following overnight."

Last year, PRWeek carried out an investigation into influencer fraud and fakery, which found the issue was persistent and there were not authorities in the UK that dealt with it.

At the time, Manifest Group founder and CEO Alex Myers said: "The elephant in the room with the fake-influencer debate is that if an agency is doing its job properly, fake influencers aren’t really an issue."

At a PRWeek breakfast briefing on influencers, Edelman UK head of influencer Philip Trippenbach warned that an influencer’s organic reach was "basically meaningless", because it could easily be manipulated, and that marketers should focus on an influencers social proof – which is an assessment of how talent can actually influence a specific audience.

Meanwhile, an Australian analysis of influencers found that only 16.7 per cent of their audience was valuable to brands once fakery, viewability and target audience factors were taken into account.

"KPIs for influencer marketing are often defined based on engagement, something influencers can now purchase or induce through engagement pods. This should have every marketing executive questioning what they are really getting for their money and if their marketing spend could be put to better use," he said.

"Our findings raise the question of companies handing our free products on a larger scale. Is the practice of handing out free products to anyone with more than 20,000 followers not only encouraging influencers to use bots, but also fuelling the consumerism fire?"

Here is a global breakdown of the top ten worst markets for Instagram fraud and the ten countries where it is least prevalent.