Rachel Konrad joined Impossible Foods in 2016, the same year the Impossible Burger was born. At that point, the burger was only available at one restaurant: Momofuku Nishi in New York.

"When I first started, we were at 100 employees," says Konrad, Impossible Foods’ chief communications officer.

Now, 8,000 restaurants across the U.S., Hong Kong, Singapore and Macau serve the plant-based burger. Since the launch of Impossible Burger 2.0 in January 2019, the number of locations serving it has increased 50%. And, later this year, it will launch in retail outlets. The demand has grown so much the company is struggling to keep up.

Konrad wants to make it clear that Impossible Foods has no fundamental supply chain constraints. The burger’s sudden surge in popularity this year simply took the company by surprise.

"No one knew how quickly this would catch on this year, even internally here," says Konrad. "There is a growing awareness of the ties between what you eat and your carbon footprint. An overwhelming number of millennials are moving toward a plant-based or plant-forward diet."

As a result, Impossible Foods is quickly expanding. In just one day in May, 20 people were hired to work in its Oakland, California, plant. And it is planning to build a second production line to double capacity.

The days of standing on desks and shouting are over, too, as Konrad scales up the communications team for Impossible Foods’ current head count of 440, including 130 staffers who work in the Oakland plant. In May, the company hired its first fully dedicated internal comms employee, Malaika Murphy-Sierra, who will split her time between the plant and HQ.

Konrad’s team includes 14 people who handle PR, creative and social media duties. She will be making several more hires in the second half of 2019, including a director of financial comms. Allison+Partners is the company’s PR partner and has "grown up with Impossible Foods," Konrad says.

Financial information was not disclosed, but in May the company announced a $300 million Series E funding round. A large fraction of that is going toward specific manufacturing scale-up, says Konrad.

"The launch at Burger King was our biggest moment in terms of media coverage, and that raised demand and sales everywhere else," says Konrad.

The Whopper is Burger King’s most important brand after Burger King itself. So if the company is willing to call this new product the Impossible Whopper, people "have to take note," she explains. 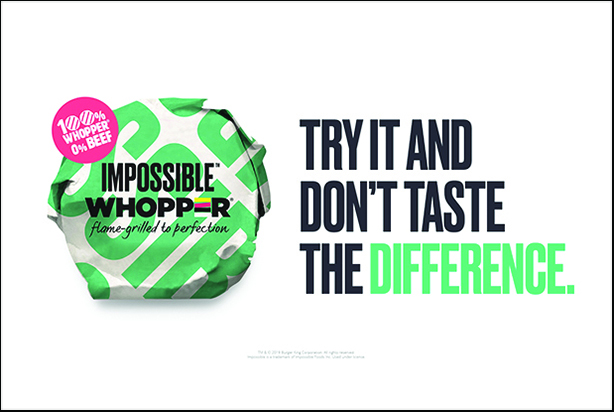 The Impossible Whopper will be available at Burger King's 7,200 U.S. locations by the end of 2019.

Another reason it caught the eye of consumers: It launched in St. Louis, the second-largest cattle producing state.

"It is a real meat-lovers place, not some coastal California thing that might make it to the middle of America in 30 years," says Konrad. "This is in the heart of America, and it did exceedingly well."

Impossible Foods worked in "lockstep" with Burger King on totally unified communications around the partnership.

"I can’t even tell you the number of meetings we had, almost on a daily basis, regarding everything from fonts, Pantone colors, how the Impossible Burger would appear on the menu, where it would appear on the overhead menu, what is the press release, what are the talking points, which execs will be offered up, who will speak on what topics," explains Konrad. "Every single thing was coordinated. There were no surprises."

However, some restaurants are not quite ready to ride the meatless meat train just yet. After a few media reports in May hinted that Arby’s was interested in working with Impossible Foods, Arby’s was quick to make it definitively clear that it would "never" serve plant-based meat. In an attempt to flip the vegan "meat" trend on its head, Arby’s created a carrot made of meat in June and plans to launch more "meatables." Konrad told PRWeek, "It’s a fun stunt that demonstrates how seriously all QSRs are managing the inevitable shift to sustainable food. I love how even Arby’s — which wants to be the ‘bad boy’ of fast food —  is highlighting awareness of plant-based meat."

"While it feels like every brand in our category is announcing a new meatless menu item lately, we’re going to continue being ourselves," Arby’s CMO Jim Taylor told PRWeek.

From cars to food

Before Rachel Konrad joined Impossible Foods, she worked in the car industry for eight years, directing comms for Tesla and the Renault-Nissan Alliance. She specifically wanted to work for sustainability-oriented causes and companies that were shifting the status quo.

"My first PR job was Tesla, which is really advancing the state of the art for electric vehicle technology. Then I went to work for the Renault-Nissan Alliance, the largest producer of electric vehicles," says Konrad. "It was clear to me the auto industry is heading quickly to a situation where at some point soon all cars will be electric or hybrids.

"Elon Musk is the world’s most brilliant, living applied physicist. I’m incredibly fortunate to have learned directly from him."

In 2015, Konrad bumped into Impossible Foods’ CEO Pat Brown at the U.N. Climate Change Conference, and she was inspired by his company’s mission.

Like Tesla made the auto industry realize there is a demand for sustainable cars, Konrad says Impossible Foods will "force the rest of the food sector to move to a more sustainable plain."

"Any organization that has some categorical fundamentalist stance against plant-based meat is going to have to eventually deal with consumers heading in that direction," she says. "That’s Arby’s call."

Impossible Foods doesn’t see Beyond Meat as a competitor. Its real archenemy? The beef industry.

"We are happy about any company trying to eliminate the need for animals in agriculture," says Konrad. "They share our mission."

The mission: Make sure people are purchasing Impossible Burgers instead of a conventional burger made from "ground-up cow carcasses," she says.

Because of this, Impossible Burger has no interest in targeting vegans or vegetarians, who only make up 3% of the market anyway. They are already "doing the right thing" by eating with a small carbon footprint, says Konrad.

"If you’re really happy with quinoa and sprouts and veggie burgers from the 1980s, great, I salute you," she adds. "But if you crave the taste and depth of meat from animals, we want that customer. We are targeting the true carnivores."

To get their attention, Impossible Foods’ go-to-market strategy started with getting the top meat-serving chef’s onboard. They include Momofuku Nishi’s chef and founder David Chang, who eliminated all the vegan options on his menu and was protested for doing so; chef Michael Symon, who wrote a book called Carnivore with recipes for meat lovers; and Traci Des Jardins, who popularized the grass-fed beef movement in the 1990s.

"They all helped us show this is a product worthy of restaurants in the heart of their menu, right alongside meat from animals," says Konrad.

Another challenge for the company is getting people over what Konrad calls "plant-based anxiety," which she says effects 67% of Americans.

These are people who "tried a veggie burger at some college barbecue in 1994 and it sucked and they are never going to try a plant-based thing again; they are completely turned off," Konrad explains. To change consumers’ minds, Impossible Foods has rolled out a number of sampling programs — sometimes, in unexpected places.

"Our research shows once you try an Impossible Burger you have an almost 100% likelihood of purchase," says Konrad. "This is not something that is easy to overcome just with publicity or ads. You need to get the product into people’s mouths and then they become very passionate advocates."

At this year’s CES, the largest consumer electronics convention in the U.S., a food truck served 12,000 sliders per day to attendees as part of the Impossible Burger 2.0 launch. It was the first time CES has ever showcased a food in its global roster of disruptive technologies, and the burger won all the top awards at CES, including Best of Show. It was also widely covered by the journalists who attended.

"Launching the Impossible Burger 2.0 at CES was a great opportunity to emphasize the fact that food is the most ubiquitous tech on the planet," Konrad says. "A huge amount of early adopters and influencers go. This is a confluence of the tech world and global investment sector." 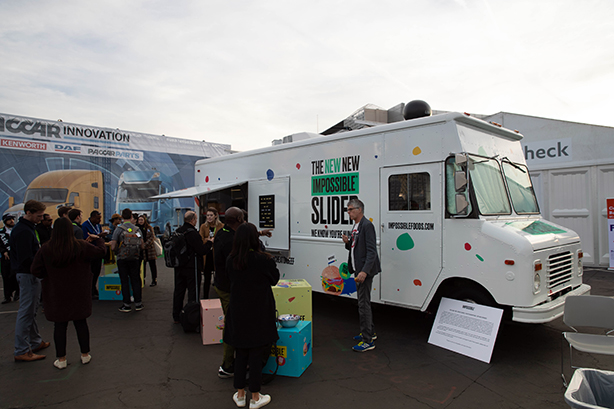 The Impossible Burger won all of the top awards at CES, including Best of Show.

In May, more than 50,000 samples of the burger were given to attendees of the National Restaurant Association Show in Chicago, over the course of four days.

"Just like CES, it was for early adopters, next generation consumers, influencers and technologists," says Konrad. "The convention is for the trendsetters and purchasers and chefs — people with a profoundly high impact in the restaurant industry."

The company also has to stay on top of misinformation about its own product and GMOs generally.

"[Konrad is] fierce and all out when it comes to defending Impossible Foods against false or misleading reporting, of which there’s plenty," says the company’s CEO Pat Brown. "The battlefield is strewn with journalists who betrayed the truth on her watch."

Taking on some moms

Moms Across America is one group that has been on a year-long tirade in order to take down Impossible Foods "to push its anti-vaccine, anti-GMO agenda to anyone gullible enough to listen," Konrad wrote in a Medium post in May.

"I could have gone a lot further with my Medium post," says Konrad. "That was me trying to be measured and calm."

Moms Across America recently wrote about how Impossible Burgers are genetically modified, are not advertised as such and, apparently, have been shown to "cause organ damage in animal studies."

"The popular thing to do, the easy path of least resistance, would be to ignore them and they would go away," says Konrad.

But she is happy to call out the group, along with others who are "anti-vaccine crazies," and take them down.

"I am based on facts and science," says Konrad. "Consumers are rational, and facts and data will eventually prevail. This as an opportunity to make people who are on the fence or are fans of the anti-vaccine movement understand it’s dangerous."

Last year, when model Chrissy Teigen shared her love of the Impossible Burger on The Ellen DeGeneres Show, that was all completely organic.

"We have an influencer program, but we do not pay our influencers, ever," says Konrad. "We have a hard policy on this."

There is waning credibility in #ad tweets or posts, she explains. Celebrities such as Serena Williams, Trevor Noah and Katy Perry are investing in the company, which creates higher value advocacy than if Impossible Foods just paid people to be part of an advertising campaign, says Konrad.

"We don’t do conventional advertising; we don’t do any paid advertorial," she says. "We leverage earned media and we do the same policy with influencers. We want to create a product that is so fascinating that we have deep engagement from people and we want to create a dialogue more so than just pound people with ads."

It is important to spark conversation rather than go with the old school big food model of advertising, which, Konrad notes, is "really tired."