One of the UK’s largest sausage manufacturers has left consumers asking ‘what the Heck?’ after publicising a Boris Johnson photocall over the weekend in a stunt that could prove costly.

However, the image – published on Twitter by PA journalist Dave Higgens – has left a bitter taste in the mouth of Heck consumers.

Many vowed to #BoycottHeck because of its association with the Marmite-like politician.

There was, however, a deeper problem with the association that was called out by The Observer’s food critic Jay Rayner.

Gone from having no dodgy ingredients to being chock-full of shit in one move.

Funny how Heck’s feed is a curiously Boris-free zone.

Perhaps their PR realised that tying themselves to a lying, bigoted arsehole wasn’t the smartest #BoycottHeck

When Rayner visited the North Yorkshire factory, in 2017, 85 per cent of Heck’s workforce hailed from Eastern Europe and founder Debbie Keeble described Brexit as "cataclysmic".

She told Rayner: "No-one here will take these jobs. During the referendum, campaigners were going on about people coming over here taking our jobs. Well, they’re not, because nobody here applies for them."

At the time of writing, more than 8,000 people liked Rayner’s Tweet calling out Heck's hypocrisy, 2,600 had retweeted his messages and there were hundreds of comments from consumers promising to boycott the brand, many who were fans of the produce.

At the time of writing, Heck had not responded to the backlash on its social media channels or when PRWeek asked why it had a change of heart about promoting a key architect of Brexit. 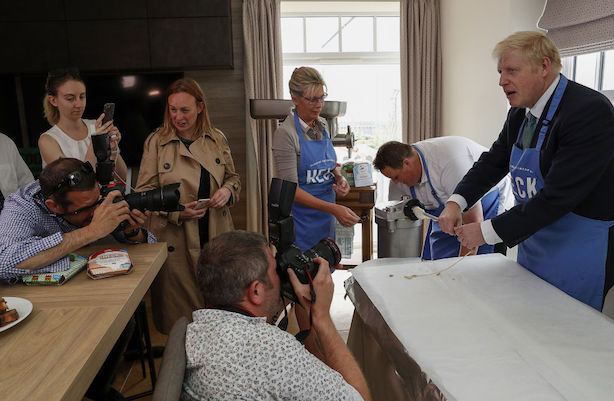 The perils of 'Brand Boris'

Almost all of the comments in reaction to Boris Bangers on social media have been negative and the brand has so far failed to respond.

Olley Goss PR founder Andrew Olley believes the stunt has not only backfired from a corporate reputation perspective, it could also impact staff morale, particularly in a company that relies on a large proportion of European workers.

"You allow yourself to become a Boris photocall moment at your peril, especially as he is on the final furlong in the race for power," Olley said. "I wonder how this stunt went down in the staff canteen, with the workforce no doubt worrying about their jobs as 31 October looms.

"They were clearly hoping for a flash-in-the-pan hit of publicity to get people talking about Heck, after plans for Sausage World went south earlier in the year, due to the lack of EU funds they hoped for. The Heck story and its aspirations to export British bangers around the world deserves to be better articulated than this."

Sausage World was Heck’s plans for a bangers theme park that had been promised EU funding that a subsidiary of the Department for Environment, Food and Rural Affairs (DEFRA) subsequently spent on another project.

Emily Keogh, the MD of Palm PR & Digital, told PRWeek a problem with Heck’s stunt is that it isn’t consistent with past messaging.

She added: "Clearly, there is an awful lot of risk when brands decide to wade into politics and it is something that needs to be considered extremely carefully. The right time to do it is when it’s part of the deep value system and when it’s something of real importance to the company."

"Boris Bangers might sound great, but what the Heck? They leave a very sour taste in one's mouth," Stringer said.

"It’s one thing to try and keep the next PM on side, but it’s somewhat unsavoury when you just jump on the bandwagon for a bit of cheap publicity.

"Poor show from the management and PR team. Shows a total lack of coherent thinking and credibility."

Captions, captions, give us your captions. pic.twitter.com/NFpxi6JEzD

Yeah, not funny is it. #GiveEmHECK