Adidas, forced on the backfoot, quickly pulled the #DareToCreate Twitter stunt after the campaign was hijacked by people with offensive handles, including @GasAllJewss (see below) and @96wasnotenough – a sadistic reference to Liverpool fans who lost their lives in the 1996 Hillsborough tragedy.

The image, along with the message "This is home. Welcome to the squad", and an encouragement to buy the strip, was then tweeted out by the official @AdidasUK account.

Adidas was forced to withdraw the campaign after "a small minority created offensive versions" that abused Twitter’s personalisation mechanic. 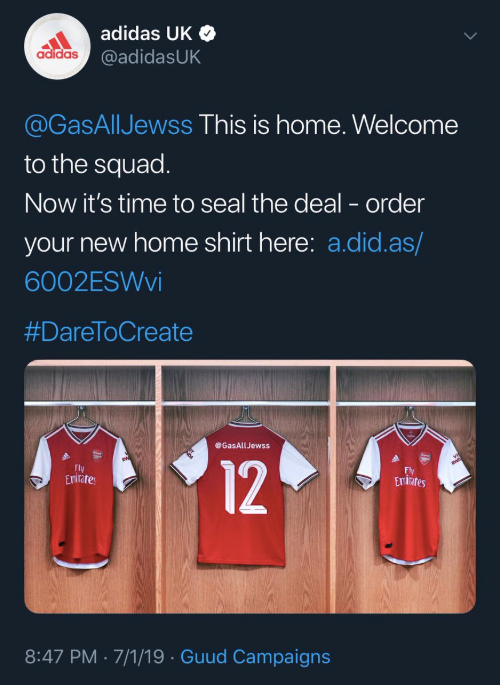 PRWeek asked Twitter how it could allow such offensive material to appear, let alone make a mockery of the Arsenal kit campaign.

The social media company said: "We regret that this functionality has been abused in this way and are taking steps to ensure we protect the health of the interactions with this account. We have already taken action on a number of accounts for violating our policies and will continue to take strong enforcement action against any content that breaks our rules."

Sports communications experts told PRWeek this is just the latest in a series of social media failures in which brands cede control to user generated content, following a National Lottery British athletics flop and an infamous Walkers Wave stunt where users substituted images of criminals.

"As football activations go, this is a slip-up of Steven Gerrard proportions," Ready10 associate director of creative Greg Double said. "It is also amazingly on brand for Arsenal to go from the sublime – with their brilliantly executed kit launch last week (see video below) – to the ridiculous, via another user-generated own goal."

"At the end of most Premier League seasons, Arsenal fans find themselves asking ‘why do we keep making the same mistakes?’ – our industry needs to do the same. Deploying user-generated content is always risky, but when you totally cede creative control – it is a disaster. There are almost as many incidences of this backfiring as there are of Arsenal’s defensive frailties; at least one of us should stop making the same costly errors over and over again."

Pitch marketing group director of campaigns Chris Allen told PRWeek that there has been enough examples of social customisation campaigns gone wrong that Adidas’ effort can only be described as ‘naïve’.

"For Adidas, this is their Emperor’s New Clothes moment, except that nobody seemed to point out that their campaign was lacking cover," he said.

"Unfortunately for Adidas, they took their eye off the ball and trusted the good people of social media. The activation itself (even before being corrupted) added little to the brilliance of the campaign and the outcome was entirely predictable. Whilst their statement reiterated that the mechanic was 'abused' by a 'small minority', Adidas will know that is irrelevant.

"The goodwill generated through its beautiful Arsenal retro kit and launch video has disappeared quicker than Mezut Ozil on a wet and windy Tuesday night at Stoke."