Government departments use social media to explain policy, propagate campaigns and showcase their activities to a home-grown public and the world at large.

But which departments were the most effective at using social media to interact with the public, and which was the best of the best for engagement across multiple platforms?

To find out, PRWeek asked social-media analytics and marketing firm Socialbakers to measure the performance of 20 government departments on three social media platforms – Facebook, Instagram and Twitter – for the 12 months to the start of June 2019. 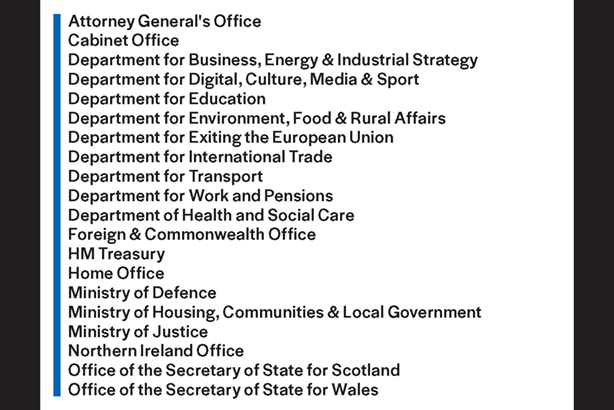 Yuval Ben-Itzhak, chief executive of Socialbakers, said timing, frequency and quality were all critical elements of a strong social-media game.

"The number of times you post has a major effect on your results – and the specific daily amount differs from platform to platform," he said. "More important still is the time of day in which you post – and crucially, the relevance and quality of your content. If you can get these three elements of timing, quality and frequency right, you will see the greatest return for your efforts."

According to a November study by YouGov, Facebook is the most popular social-media platform in the UK. It is also the most popular for the baby-boomer and Generation X demographics and the second-most-popular among Millennials.

The most important social-media metric for government departments, by far, is how much the public interacts with its posts, by 'liking', sharing or commenting on them.

By this measure, the Ministry of Defence (MoD) was the clear front-runner, standing head and shoulders above the Department for Education (DfE), its closest competitor, which had 35,000 fewer interactions.

The Foreign and Commonwealth Office (FCO) was in third place, with nearly 60,000 interactions, and completing the top five were the Department for International Development (DFID) and the Home Office. 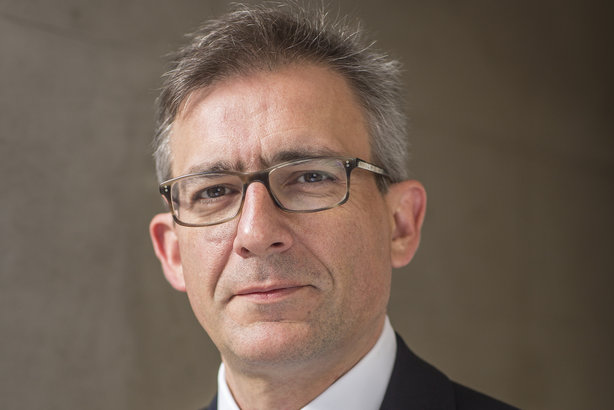 Commenting on the results of the study, Carl Newns (above), director of defence communications for the MoD, told PRWeek: "We use social media to tell the story of Britain’s armed forces. We are always trying to innovate and find new ways to engage our audiences with compelling content, whether putting a 360-degree camera in a supersonic stealth fighter or live-streaming events like the D-Day 75th anniversary commemorations on Facebook." 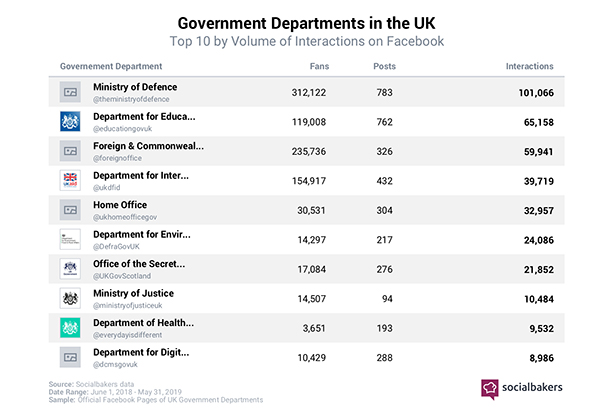 Gemmaine Walsh, director of communications at the Department for Education, added: "Our focus on creating energetic and innovative content on issues like teacher recruitment, apprenticeships and T Levels – all of which really shape people’s lives - has paid off and we’re delighted to be second only to the MOD on Facebook for public engagement with our posts."

In addition to the highest interaction overall for the past 12 months, our research also measured the top individual posts for interaction during the same period.

The changes that may come about as a result of Brexit are a topic of huge importance to the public.

It is perhaps no surprise, then, that the single Facebook post with the highest number of interactions was from the Home Office, warning that EU citizens who still wish live in the UK at the end of next year would need to apply to the EU Settlement Scheme. The post attracted nearly 8,000 interactions. 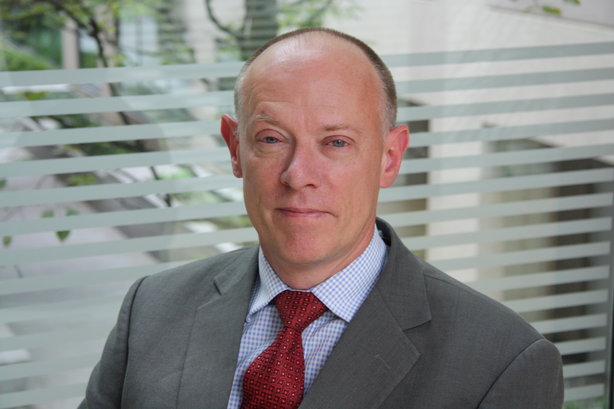 Andy Tighe (above), director of communications at the Home Office, said the department had "re-engineered" its social strategy in the past 12 months to focus on real people and their stories, in order to connect with the public more effectively.

He added: "All our policy areas are topics affecting real lives. So it’s really important that our social media channels are authentic, and reflect both the diversity of our department and the human impacts behind our announcements."

Other top posts in the past 12 months were from the MoD, the FCO and the Department for Food and Rural Affairs (Defra), with a post on protecting endangered hedgehogs, which attracted 3,000 interactions. 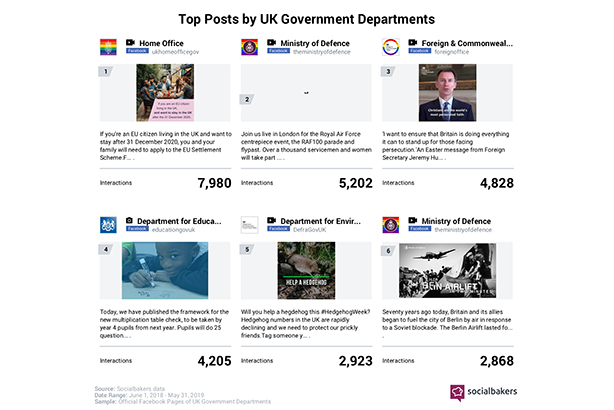 The MoD was the most prolific department on Facebook for the number of posts it created in 12 months, narrowly beating the DfE, which took second place. The Department for International Trade (DIT) was third, albeit with a sharp-drop off in the number of posts.

Making up the top five were the DFID and the Office of the Secretary of State for Wales. 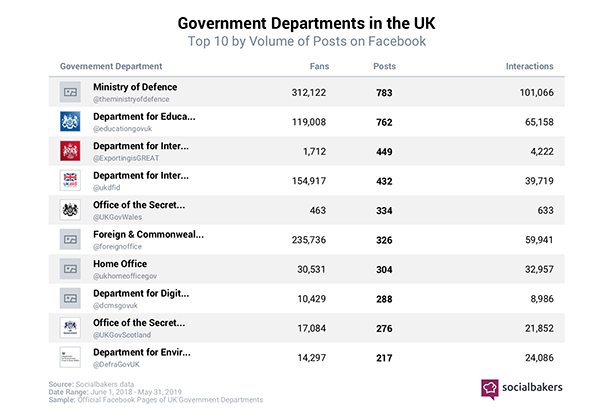 Once again, the MoD was the clear winner for numbers of followers on Facebook, with nearly 80,000 more than its nearest rival, the FCO. Making up the top five in this category were the DFID, DfE and Home Office. 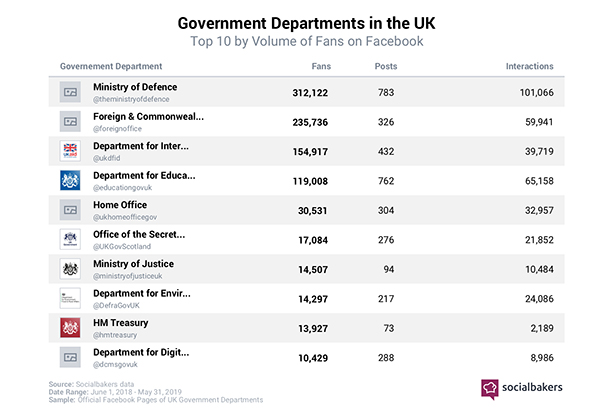 The same YouGov study rates Twitter as the UK's fourth-most-popular social-media platform, with its highest user base among Millennials, followed by Generation X and, finally, baby boomers.

Once again, looking at the most important social-media metric first, it was the FCO that was the clear leader with the public in the matter of likes, comments or shares, with nearly 250,000 interactions.

Fighting a stiff rearguard action for second place was the MoD, with nearly 190,000 interactions and, making up the top five, were the DFID, Home Office and Defra, with 120,000 interactions. 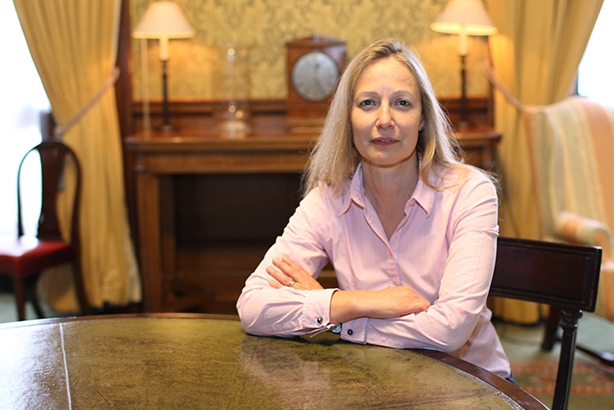 Alison Daniels (pictured), digital transformation leader at the FCO, told PRWeek how the department used social media to engage with a global audience, as well as people in the UK, to deliver foreign policy.

She said: "Our distinctive and timely storytelling content explains UK foreign policy in an engaging way to audiences overseas and in the UK. Communication is a vital lever to deliver foreign-policy goals in a world where internet usage is rising rapidly and digital news consumption is up." 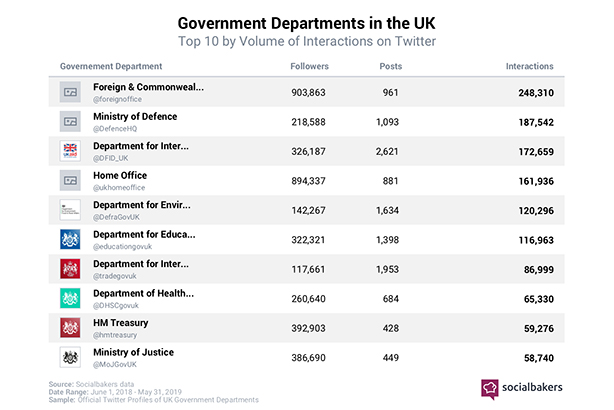 The research also looked at the top individual tweets for interaction during the same period.

A Home Office tweet on registering for the EU Settlement Scheme, identical to its top Facebook post, was the top performer with more than 11,000 interactions, perhaps reflecting the anxiety felt by some over the implications of Brexit.

Other top tweets came from the Ministry of Justice (MoJ), highlighting a change in the law making 'upskirting' an offence. The tweet won more than 8,000 interactions.

The Cabinet Office’s tweet, warning the public about believing or sharing fake news, was also a high performer, with more than 7,500 interactions.

Commenting on what he thought social-media engagement had achieved for the department, Tighe said: "When our tweets achieve significant engagement, they gain exposure to a wider range of people. This means that our messages can reach further and have more of an impact, which has been crucial for us over the past year – especially when it comes to keeping the nation safe and protecting vulnerable people through the advice and support we promote on our channels." 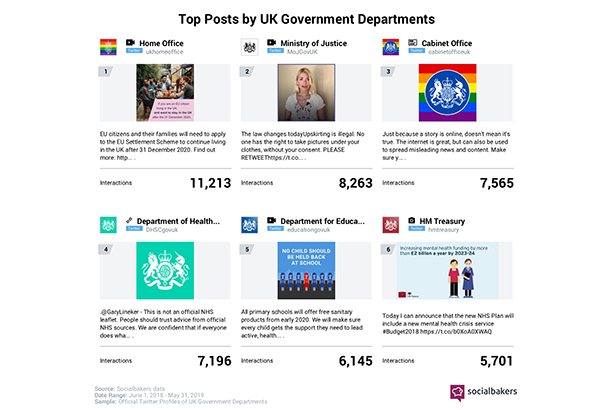 The DFID was the most prolific on Twitter, posting at least 20 per cent more often than any other government department during the past 12 months.

Its nearest competitor was the DIT, with nearly 2,000 tweets in the past 12 months, while, making up the top five, were Defra, DfE and the Department for Business, Energy and Industrial Strategy (BEIS).

Tim Gatt, head of digital and creative content at DFID, said it was vital for the department to be visible on social media.

He added: "It is important to listen to what UK taxpayers, stakeholders and the media are saying about UK aid, engage with them and rebut misconceptions and inaccuracies about our work."

Gatt added: "Social media provides a great platform for us to build trust with the UK public that their money is being spent well and demonstrate to them that UK aid works." 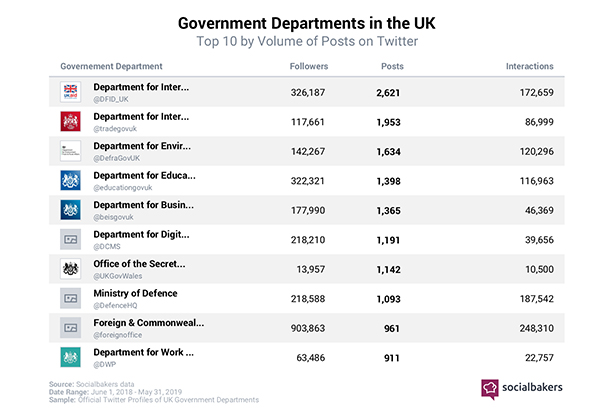 The FCO won a narrow victory in this category with 904,000 followers – just 7,000 more than the Home Office, its nearest competitor.

Which of the two departments will be the first to reach the landmark of one million followers on Twitter?

Ben-Itzhak said: "The race to one million shows the need to know your audience when creating successful social-media campaigns – and the importance of creating content that will resonate with them."

Making up the top five for Twitter followers were HM Treasury, with a steep drop down to nearly 400,000 followers, the MoJ and the Cabinet Office, with 370,000.

Commenting on the follower result, Tighe said: "We’re always striving to expand our follower base so that it can become a truer reflection of the UK’s diverse demographics." 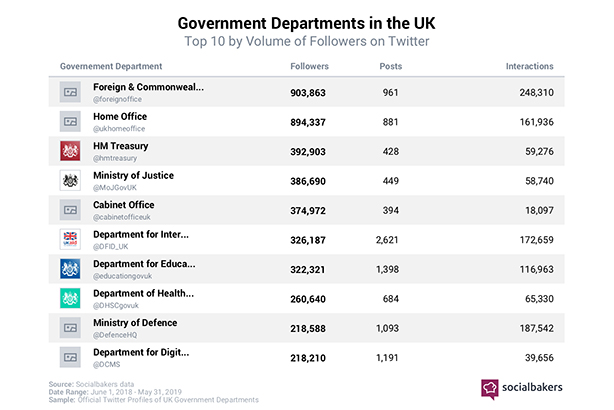 According to YouGov, Instagram is the second-most-popular social-media platform in the UK, overall, and the platform of choice for the Millennial generation. It is the third-most-popular among Generation X and the sixth-most-favoured by baby boomers. More women than men favour Instagram – 48 per cent compared to 37 per cent.

Looking at the critical metric of engagement first, the MoD was the runaway winner. The department achieved more than 400,000 interactions; more than three times the interaction of its nearest competitor, the FCO.

Making up the top five for engagement were Defra, the Home office and the MoJ. 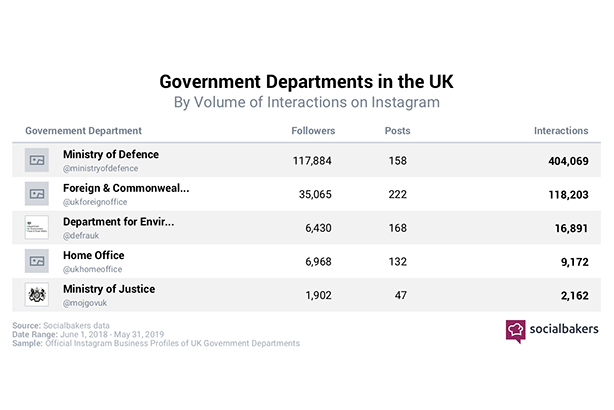 The MoD dominated all six of the top individual Instagram posts in the past 12 months. The platform, which is image-led, lends itself well to the MoD’s social strategy to showcase British armed forces.

Newns said: "A key part of our strategy is using a rich mix of channels – not just Twitter, but Facebook, Instagram and LinkedIn, with content optimised for each channel and audience. This helps connect the armed forces to the citizens they serve and keep safe."

The most popular single Instagram post by the MoD was a farewell to the Tornado GR4 fighter jet after 40 years in service, which received 5,500 interactions.

Other top posts from the department showcased soldiers, battleships and other military hardware. 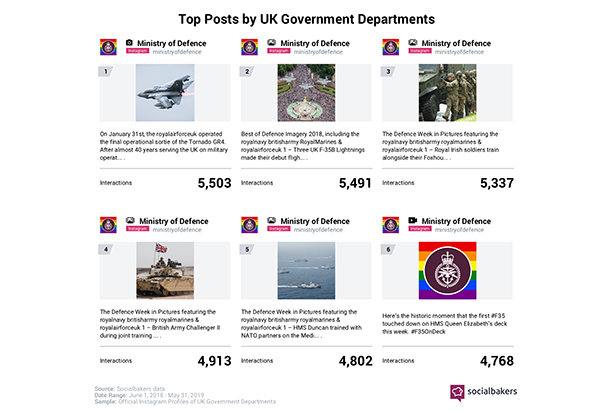 The most prolific department on Instagram was the FCO, with more than 220 posts across the year. This was followed by Defra, with nearly 170 posts, while in third place was the MoD. The Home Office and MoJ made up the top five.

Commenting on the FCO’s overall social-media strategy, Daniels said: "We focus on engaging formats that grab attention, and use the channels our key audiences are on.

She continued: "We maximise our use of video and partnerships to get our messages out there as part of wider campaigns to build UK influence. The biggest asset we have is our creative and committed team, whose diverse backgrounds and experience means we continually challenge ourselves and aim high." 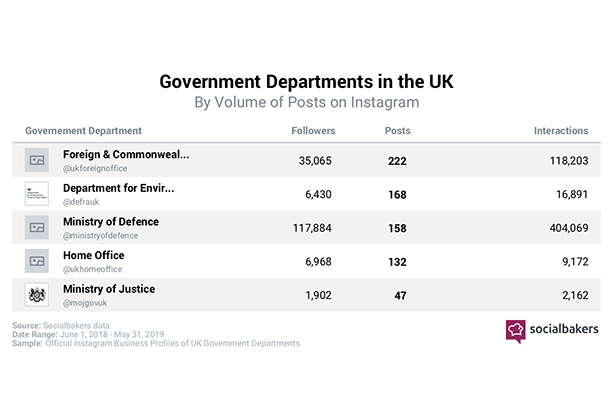 One again, the MoD dominated – its total of nearly 120,000 followers was more than three times that of its nearest competitor, the FCO. Making up the top five were Defra, the Home Office and MoJ. 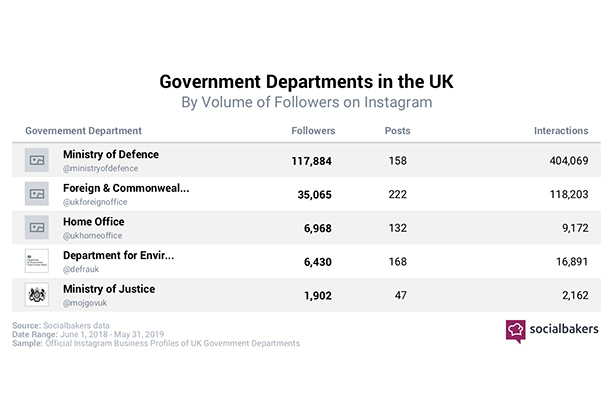 Best of the best for engagement

PRWeek looked at the results for interactions across all three of the social-media platforms we measured to present a list of the top five overall winners for engagement.

We awarded 10 points to the department that came top for engagement on each platform, through to six points for the department placed fifth on each list. The maximum possible points were 30, based on the three platforms.

The table shows that the MoD was the best of the best out of all the main government departments for engagement on social media during the past 12 months. With 29 points, it only narrowly pipped the FCO – on 28 points – to the post.

Third-placed for engagement was the Home Office on 20 points, while DFID achieved fourth place and Defra, close behind, came fifth. 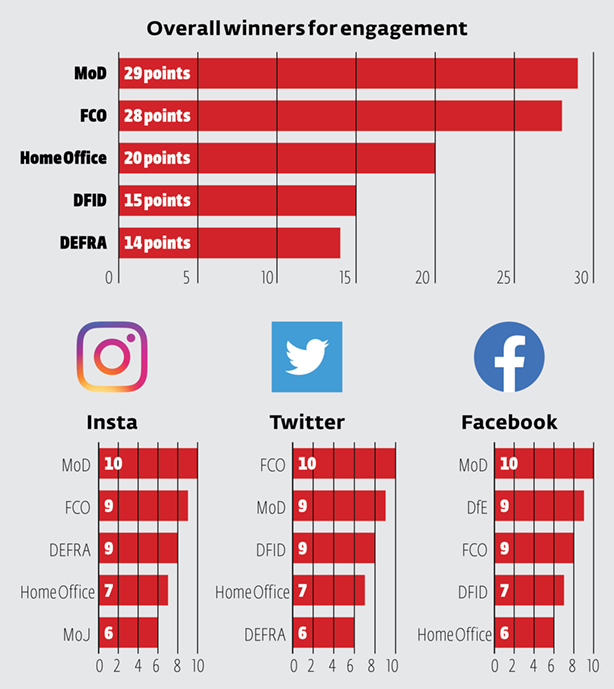 Commenting on the overall results of the study, Ben-Itzhak said: "Interactions on social media are the most accurate way to evaluate the quality, reach and resonance of content with your audience. The higher the social-media interactions are, the more a platform knows that you have quality content that strikes a chord with your audience. As the goal of the social-media platforms is to provide the best-quality content to their users, this will likely positively impact the reach of the rest of your content."