The data was compiled by the Climate Investigations Center (CIC). The CIC was established in 2014 to monitor individuals, corporations, trade associations, political organisations and front groups it considers are working to delay the implementation of "sound energy and environmental policies".

The research is based on the publicly available federal tax records of more than a dozen energy, manufacturing, commerce and fishery associations.

Kert Davies, founder and director of the CIC, has been conducting corporate accountability research for more than 20 years. He found that fossil fuel-related bodies spent six times more on PR than renewable energy interests over a ten-year period.

While there is nothing wrong with accepting money from trade bodies he believes the research shows that the PR industry "acts as an intentionally invisible partner to buff the image of Big Oil".

Davies said there is zero transparency about PR contracts with corporate entities, and the only reason there is any data available is because "non-profit" corporate trade associations like the American Petroleum Institute (API) are required by law in the US to list their five biggest contractors on their tax forms.

He described the findings as "the tip of the iceberg".

Global PR giant Edelman was by far the top-paid firm, earning $358.9m. That included $327.4m from API between 2008 and 2012, and an additional $16.5m from the American Fuel and Petrochemical Manufacturers.

In response to the findings, the agency said it "fully recognises the reality of, and science behind, climate change" and does "not accept client assignments that aim to deny climate change." It also confirmed it has practiced internal carbon reporting since 2011, and achieved a 38 per cent total reduction to date. 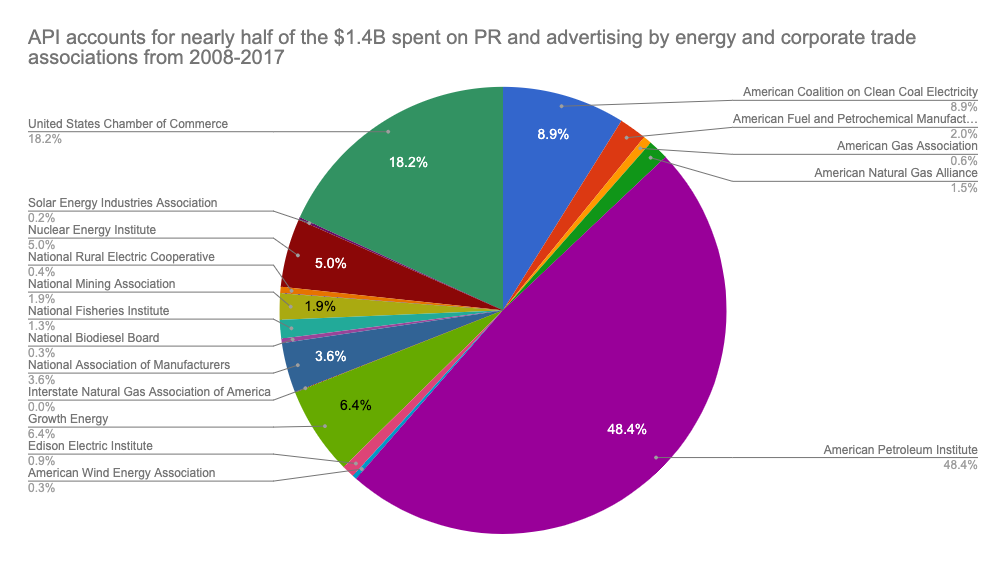 API has also spent more than $96m with FleishmanHillard since 2011.

Porter Novelli worked with America’s Natural Gas Alliance, a natural gas trade association that was later absorbed by API. It earned a total of $1.9m in 2013 and 2014. In response, both deferred to their parent company Omnicom, which said it "does not have a formal position paper on climate change" and "does not do internal carbon accounting."

Hill+Knowlton worked with the Nuclear Energy Institute (NEI) to create the Clean and Safe Energy Coalition, a pro-nuclear energy group that is still in operation. Between 2008 and 2016 NEI paid H+K $24.3m for its PR work. In response, the agency said: "We support urgent action to tackle climate change through the Paris Agreement."

It added: "We will not undertake work that is intended or designed to mislead."

FTI Consulting had a one-time $7.9m contract with the National Association of Manufacturers in 2015. It did not respond to a request for comment. Several other agencies also recieved tens of millions of dollars, including DCI Group, The Hawthorn Group and Kivvit.

Not for PRCA to judge

The PRCA's director general Francis Ingham said it is not for the professional body to judge which clients to approve and disapprove of - those decisions lie with individual agencies and the individuals who work within them - so long as their activity is legal.

Ingham said that the agencies he sees in the UK and elsewhere do not hide who they work for, and that those who undertake public affairs work must make public their client base every quarter.

"We take our Codes of Conduct and Professional Charter seriously - as shown by the Bell Pottinger case. And we know that the industry does, too. That fact compels practitioners to tell the truth and to have regard for the public interest. We believe that in the overwhelming majority of cases, they do just that, and they allow the public to judge their choice of clients and causes," he said.

CIC director Davies added that greenwashing the image of fossil fuel companies in the face of increasing calls for limits on fossil fuel combustion was no longer acceptable.

He added: "The CIC would like to see a more transparent approach by PR agencies in the US, the UK and elsewhere - so they can take credit and hear direct public feedback on their creative work."

In April, PRWeek reported on a campaign by Greenhouse PR to expose oil company lobbying that saw Shell sever its ties with an anti-climate lobby group, and last month two industry professionals called on agencies to play a more positive role in tackling the climate crisis.

Earlier this month, climate activists Extinction Rebellion joined more than a dozen PR agencies in announcing their refusal to work on fossil fuel briefs, and called for the industry to declare its 'climate conflicts'. So far more than 260 agencies and individuals have signed up.