PRWeek's five favourite campaigns from the Cannes Lions Festival of Creativity ended up a two-horse race, with a tense denouement befitting of two worthy protagonists.

Eventually it was won with more than 350 votes by US health insurer Aflac, which gave cancer-afflicted children over three years old an interactive toy duck – the company's logo – free of charge. New York-based Carol Cone on Purpose came up with the idea; the PR credit went to Marina Maher Communications (MMC). 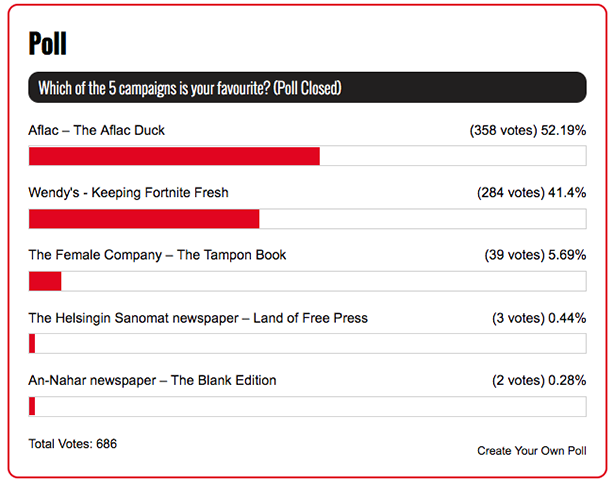 Aflac is an American health insurer, which has a cute duck as its corporate logo. It came up with the idea of providing every child over the age of three, diagnosed with cancer in the US, an interactive toy duck free of charge. The ducks are designed to both comfort children undergoing cancer treatment and help them express the emotions they are feeling.

My Special Aflac Duck™ helps children as they go through cancer treatments, helping provide smiles, laughter and companionship. It is flying into Orange County hospital tomorrow and more children’s hospitals this year, at no charge at all for families!

As well as being a brilliant idea and providing help to children, the initiative has been very well received in America, with acres of media coverage and special awards at the SouthBySouthWest and CES festivals. The campaign won a PR Lions Silver; idea creation credit went to the New York agency, Carol Cone on Purpose.

In case you missed it: Five Campaigns We Liked in May: your winner revealed