Unilever skincare brand Simple partnered with pop group Little Mix and anti-bullying charity Ditch the Label to launch a film highlighting the extent to which teens are bullied online, which was released to coincide with Stop Cyberbullying Day.

The clever 60-second film, featuring the group’s body-positive song Strip, sees band members advance on a billboard daubed with negative expressions - such as ‘poser’ and ‘troll’ - and wipe them away to reveal kind alternatives.

The work was created by TMW Unlimited, directed by Laurence Warder and produced by Sony Music's 4th Floor Creative.

EBay sent Buzz Lightyear into space (for real) in a Toy Story 4 partnership to help launch the fourth film in the Pixar series on 21 June.

YouTube personality Ladbaby was challenged to launch Lightyear into space, before auctioning the action figure on the site, encouraging fans to bid via a video. The stunt aimed to inspire parents to list some of their children's old toys on the online marketplace, and it is also raised funds for children's charity Together for Short Lives.

The video was created in-house by eBay and Ladbaby, in conjunction with agency Rubber Republic, and launch ran the PR/media relations.

This clever and thought-provoking campaign, for International Women in Engineering Day on 23 June, is a good example of using the theme of female empowerment in an authentic way that’s relevant to the brand.

Today is #InternationalWomenInEngineeringDay and at Jaguar Land Rover we want to continue to inspire the engineers of tomorrow. #INWED19 pic.twitter.com/AOpi8fXb6s

To show how gender attitudes are established at an early age, and how inspirational women can challenge them, primary school children were asked to draw a picture of an engineer by Charlotte Cooper - a 27-year-old Jaguar Land Rover engineer who was behind the new L494 SVR Range Rover Sport. W Communications is behind the campaign.

To mark the fifty years since the Stonewall Uprising, Pride In London released a moving film to honour half a century of Queer revolt.

The film opens at the Stonewall Inn on 28 June 1969 and pays tribute to the important milestones passed in the fight for LGBT+ equality.

It was created by ad agency BMB, and PR for the campaign is handled by Talker Tailor Trouble Maker. The film features an all-LGBT+ cast who re-enact historic scenes that have defined what Pride is today. It first aired on Channel 4 on Friday, 21 June 21.

There are also a series of outdoor ads that contrast royal portraiture and privilege, with the oppression of a marginalised community that will feature on billboards, displays in stations and posters on public transport across London.

Grenfell United, a support organisation formed by the survivors and bereaved relatives of the Grenfell Tower fire, have marked the second anniversary of the tragedy with a series of projected messages, drawing attention to the unsafe conditions of many tower blocks across the UK. 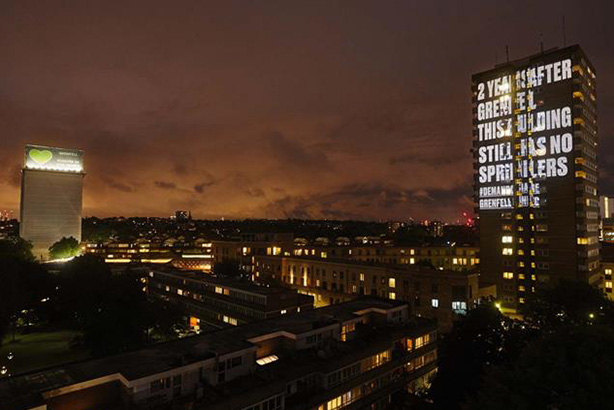 Seventy-two people died in the fire in June 2017. Unsafe cladding used on the building and inadequate safety features contributed to the disaster, despite the risk of fire being raised by residents several years before.

It has been reported that 600 tower blocks in the UK could have similar cladding to that in Grenfell Tower. But despite Theresa May pledging a year ago to spend £400m to remove the cladding, it is still found on a substantial number of buildings.

The work was the idea of Anomaly creative team Conrad Swanston and Alex Bingham, who approached Grenfell United. One of the three buildings (above) involved in the activity was just metres away from Grenfell Tower in Kensington, west London. It still has no sprinklers.

Read next: Five Campaigns We Liked in May - your winner revealed