One of the greatest City coups in recent times – hailed by City AM as ‘Slam Dunkerton’ – was the result of a powerful and effective strategic communications campaign that garnered enough public and investor support to reinstate Superdry co-founder and former CEO Julian Dunkerton to the board.

On 2 April, shareholders voted by a narrow majority of 50.75 per cent to re-elect Dunkerton at an extraordinary general meeting that he had requisitioned. This led to a mass leadership exodus, with chairman Peter Bamford, chief executive Euan Sutherland, finance chief Ed Barker and remuneration committee chair Penny Hughes all stepping down.

Superdry’s communications director Susanna Voyle, who was only in the role for a couple of months, followed them out of the door, and would not be the last, while brokers UBS and Investec resigned from the account.

Rewind a year, and this outcome seemed highly unlikely. Dunkerton had stepped away from business in early 2018 amid a hostile board and a feeling that he was being marginalised. Despite sitting on the board as director of brand and products, Dunkerton said he was being cut out of the design process and sidelined from meetings. Products began appearing in Superdry ranges he did not recognise.

Superdry’s performance began a rapid decline under the direction taken by Sutherland and the rest of the board, with profits halving. A series of profit warnings punctuate a share price drop from £20.39 at the start of 2018 to £5.32 a year later (see chart below) – wiping £1.2bn in value. Massive job cuts at Superdry also marked this period. 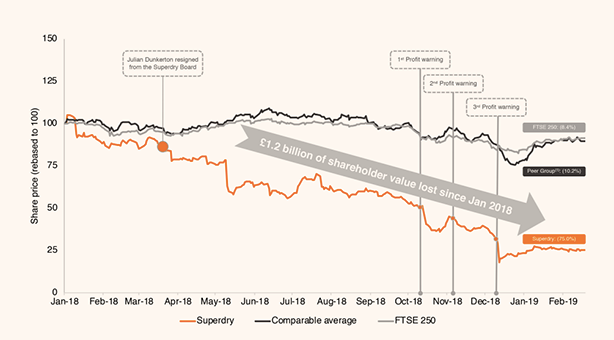 From fashion to ‘supermarket’

At the heart of the problem, Superdry had strayed too far away from its roots as a heavily branded t-shirts and hoodies fashion brand favoured by A-list celebrities including Idris Elba and David Beckham.

It was shifting its focus towards unfamiliar product lines and demographics, such as kidswear rather than ‘cool millennial’. Superdry’s new approach was about a constant cycle of sales and discounts that were cheapening the brand – described by one insider as adopting a "supermarket mentality".

The new management wanted to reduce the SKU count of core products online and the variety in shops to lower costs, at a time rival fashion labels were refreshing their ranges frequently. They also wanted to change the range quarterly, rather than the previous summer and winter collections, which contributed towards frequent discounting and out-of-season stock, such as shorts being displayed during winter. 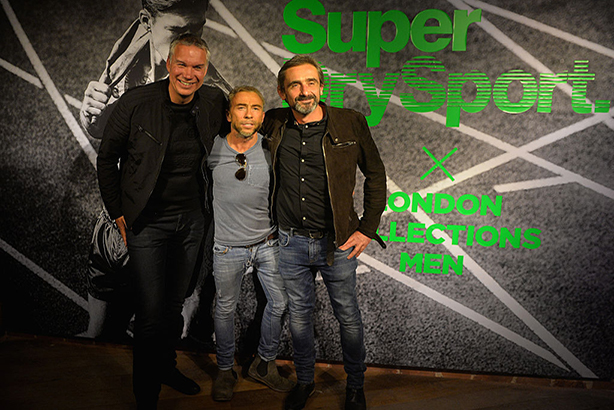 Former CEO Euan Sutherland (left) with co-founders James Holder and Julian Dunkerton at the launch of Superdry sport. The relationship between Sutherland and the founders would sour. (©GettyImages)

Dunkerton – who still owns an 18 per cent stake in the business – was not only at risk of losing the value of his shareholding, but struggled to watch the business he created with designer James Holder in 2003 become another high-street clone.

He wanted to save Superdry and enlisted the help of strategic communications firm Seven Dials City PR.

"Superdry has always been a brand that retails, rather than a retailer that has a brand. They were copying the high-street model, which Julian felt was doomed to fail," Seven Dials City PR managing director James Devas told PRWeek.

"Julian realised he had to get back involved, the path the new management team had put Superdry on was going to kill the brand."

After failing to convince the board and management to reinstate him on the board through amicable means – Dunkerton used his ownership position to requisition an extraordinary general meeting to be reinstated on the board.

The problem was that he had to battle against hostile leadership and institutional investors to have any hope of garnering enough support.

In October 2018, with the help of Seven Dials City PR, Dunkerton launched the ‘Save Superdry’ campaign.

"We wanted to create public pressure and alert the shareholders that the company had these strategic problems and that Julian had solutions but needed enough shareholder support," Devas says. 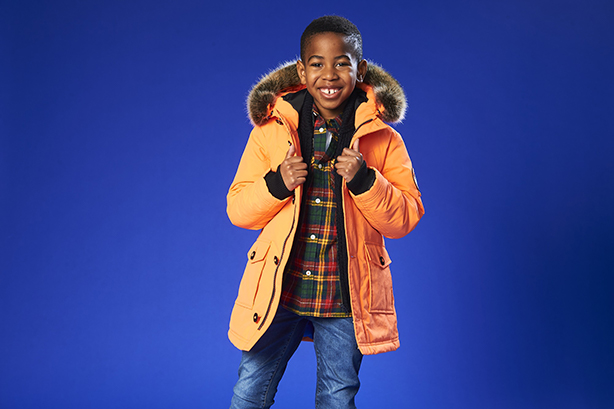 Did Superdry's foray into children's clothing betray its brand roots?

‘Play the ball, not the man’

This initially involved seeding the story to select media, such as the Sunday Times.

"We advised Julian to specifically play the ball and not the man, and to not make any of the comms personal with the CEO and other members of the board," he says.

"He said all along it was about strategy and would work with anyone along as they buy into these strategy changes that I am advising."

The objective of the comms strategy was to build public support, including influential voices in the media and fashion world, as well as smaller investors.

"During the six months of the campaign, Juian did everything he could on the record, including live TV, Sky news twice, all of the financial journalists. His responsiveness was the key," Devas recalls. "Sutherland didn’t go on the record – the only time was the 12 December half-year results. There were program producers that would complain Sutherland declined to appear on their shows.

"It was important for Julian to be open and transparent about everything he was saying, rather than get dragged into a nasty background spinning slanging match."

Devas tells PRWeek that Superdry’s top brass waged a counter-offensive, with larger investors and other stakeholders in an attempt to derail Dunkerton and his team.

"A row at Superdry between the founder and the biggest shareholder and the board is always going cause anxiety for shareholders, so it was about trying to demonstrate that Julian had a clear plan to turn it around. Getting James Holder to publicly back Julian was a key moment," Devas says.

"We also got the founders of boohoo and Asos to publicly back Julian’s action, adding weight to the campaign."

A key pillar of the campaign was the savesuperdry.com microsite (see below), which crystalised support and built momentum for the campaign. Aside from rallying support, the microsite had a corporate governance function, allowing Dunkerton’s team to publicly share important documents. It also allowed public comments, including the views of staff and other stakeholders.

"It was all about strategy, customers and reaching out to smaller shareholders – we were building a groundswell of support and energy that was being harnessed by the microsite," Devas explains. 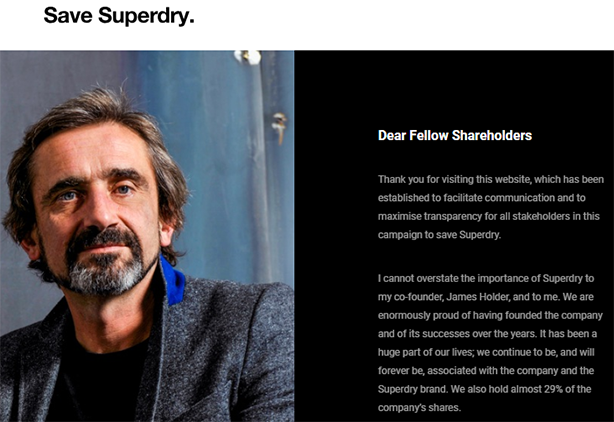 The slimmest of victories

Fast forward to April and Dunkerton’s bid to be re-instated needed about 13 per cent of voting investor support on top of the 30 per cent he and Holder currently held to get over the line.

"That doesn’t sound like a lot but you have to remember that large institutional investors were going to back Superdry’s management," Devas explained.

"It’s very unusual for dissident shareholders to win these campaigns. Institutions generally back management teams, they don’t like board disruption and the board were making it as high stakes as possible by threatening to resign en masse."

Dunkerton won by the slimmest of margins (50.75 of the proxy votes). Since his re-instatement, Superdry’s share prices has stabilised as the fashion retailer rebuilds its management team and strategic direction. Its first full-year results are due to come out on 10 July.

Devas says this case study illustrates the power of a carefully planned and executed communications strategy.

"I think it’s enormously powerful," he says. "We were told at the beginning, ‘you haven’t got a chance and he’s not going to win – the City won‘t back you’.

"But we ran a very good communications campaign and the other side were very negative, high handed, dismissive and tried to attack Julian and his character. They got their tactics wrong.

"Julian had the best interests of all the shareholders and the staff and smaller investors. He was the heart of this British success story that was cleary in trouble."