The Female Company – The Tampon Book: A Book Against Tax Discrimination

The PR Lions Grand Prix winner may not have come from a PR agency - integrated WPP shop Scholz & Friends of Berlin was behind it - but earned media was at the core of this clever campaign for tampon manufacturer The Female Company.

The subversive campaign targets the problem of tampons in Germany being taxed at the top rate of 19 per cent, which is higher than many other products.

Books are taxed at seven per cent, therefore, to highlight the disparity, the campaign saw tampons sold inside a book at the lower rate. The book, which contains information about the issue, sold out within a day, shifting 10,000 copies.

Impact BBDO won the Cannes Grand Prix in the Print & Publishing Lions category (Communication Track) for ‘The Blank Edition’, which saw the agency work with the leading Arabic-language daily newspaper An-Nahar to print an entirely blank edition, to highlight the Lebanese people’s frustration with political inactivity. Impact Porter Novelli Dubai took a PR and media credit for the campaign. 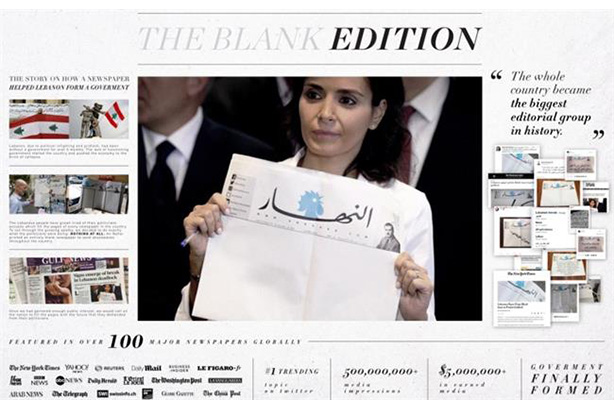 After the release of the completely blank edition, the newspaper’s editor-in-chief encouraged citizens to use it to write their own headlines and send messages to politicians over social media.

"To cut through the growing apathy we decided to do exactly what the politicians were doing: Nothing at all," said the agency. "An-Nahas printed an entirely blank newspaper to send shockwaves throughout the country."

As Donald Trump and Vladimir Putin arrived in Helsinki for their summit, they were greeted by billboards, posters and transport shelter signs touting Finland as the ‘land of free press’, since both leaders are notoriously trying to control the media in their respective countries.

The largest subscription newspaper in Finland and the Nordics created 280-plus billboards and displayed them, in English and Russian, throughout Helsinki, on the presidents' travel routes to the summit from the airport. It is an important message in the age of fake news and a return to the idea as outdoor advertising as earned media device. It won a PR Lions Silver and idea credit was TBWA/Helsinki.

Aflac is an American health insurer, which has a cute duck as its corporate logo. It came up with the idea of providing every child over the age of three, diagnosed with cancer in the US, an interactive toy duck free of charge. The ducks are designed to both comfort children undergoing cancer treatment and help them express the emotions they are feeling.

My Special Aflac Duck™ helps children as they go through cancer treatments, helping provide smiles, laughter and companionship. It is flying into Orange County hospital tomorrow and more children’s hospitals this year, at no charge at all for families!

As well as being a brilliant idea and providing help to children, the initiative has been very well received in America, with acres of media coverage and special awards at the SouthBySouthWest and CES festivals. The campaign won a PR Lions Silver; idea creation credit went to the New York agency, Carol Cone on Purpose.

Not content with roasting real-life competitors on social media, the fast-food chain went after fictional rivals on the popular online game Fortnite, which has 200 million registered players.

With members of the brand’s social media team playing the game, the brand live-streamed a Wendy-like red-headed character with pigtails dropping into Greasy Grove, a location in the game. Consumers and gamers could watch over and over as the character destroyed the game's ficitional burger joint Durr Burger for using frozen beef (Wendy's beef is 'always fresh').

Read next: Five Campaigns We Liked in May - your winner revealed