An NGO says its 'Smoke Free Future' slogan is hypocritical.

This week, Philip Morris International (PMI) VP of strategic and scientific communications Moira Gilchrist was in a session at the Palais called ‘Facts, Fads and a Fugee: Creating a Smoke Free Future’, alongside rapper Wyclef Jean and Bonin Ventures founder Bonin Bough.

PMI also hosted its NGO events and had its own programme of activity in its own space, including open mic sessions with guests (see video below). The tobacco company paid for Bough and actor Rose McGowan to attend.

It's a move that PRWeek's US editorial director Steve Barrett described as "misguided at best, potentially ruinous to the whole content stream at worst".

Vital Strategies, a consultancy that helps governments improve public health systems and is calling for all marcoms agencies to 'Quit Big Tobacco', said the choice of Philip Morris in Cannes' ‘Good Track’ – alongside the likes of Sesame Street, the UN Women and Greenpeace – was "puzzling at best and deeply troubling at worst".

"What are the Cannes organisers thinking?", Vital Strategies senior vice president Sandra Mullin said. "PMI and other tobacco companies cause a worldwide toll of more than seven million deaths a year. Their inclusion in this program is all the more ironic, as their main purpose remains to market products that also harm children, women and the environment – the very causes with which they are sharing a track.

"Their appearance at Cannes is a calculated effort by a deservedly maligned industry to remain relevant and to continue to thrive. They are positioning their latest marketing strategy as a conscience-driven, reputation-refurbishing mission of working towards a ‘smoke free world’. This, despite the fact that they will produce 800 billion cigarettes in 2019, a testament to their empty rhetoric and their disregard for health.

"It’s a shame that Cannes organisers fell for PMI’s disguise. PMI is the opposite of social good: they continue to promote cigarettes to children, market flavoured cigarettes, and aggressively market their products near schools."

PRWeek asked Cannes Lions festival organisers why it placed Philip Morris in its ‘Good Track’, but had not receive a response at the time this article was published.

Philip Morris International defended its appearance at Cannes, claiming it was unaware it had been placed in Cannes ‘Good Track’, and that its purpose was to have a conversation about alternatives to cigarettes.

The company took out an ad in the New York Post to combat the anti-smoking group’s assertions.

We want to help change the lives of 1 billion people who smoke; we’re at Cannes Lions to inspire the best creative brains and the most robust platforms to join us on this mission. We can’t do it alone.

Unfortunately, there are some NGOs that don’t want to talk about better solutions for smokers; instead, they want to shut down any open dialogue on this critical social issue by spreading falsehoods in an effort to scare others, including those who – like us – come to Cannes with open minds. 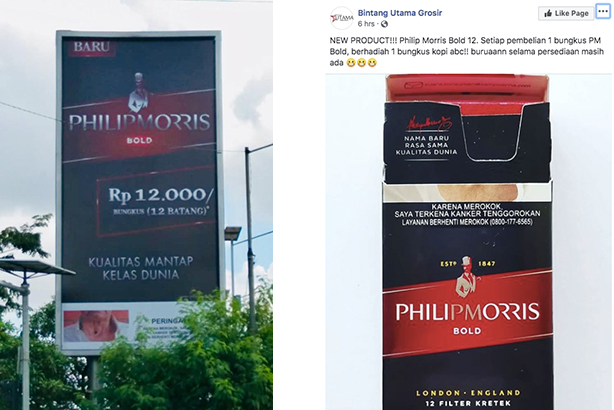 Philip Morris International launched a new high-nicotene, high-tar brand of cigarette in Indonesia this year, despite promoting a 'smoke free world' in other countries

Philip Morris International has invested heavily in marketing a ‘smoke free world’, in which the tobacco company wants smokers of cigarettes to transition to its heated tobacco product iQOS, which it claims is far less harmful than cigarettes.

However, this marketing strategy has run alongside other campaigns promoting cigarettes in countries where rules around tobacco marketing are much more relaxed.

PRWeek has learned of Philip Morris International’s cigarette campaign, You Decide, by Leo Burnett, that is currently running in Indonesia and Israel (see below).

Anti-tobacco agencies, including the Campaign for Tobacco-Free Kids, have found several examples of campaigns it says is being aggressively marketed to young people.

President Matthew L Myers said: "With slogans like ‘smoke-free future’ and ‘unsmoke your world’, giant cigarette maker Philip Morris International has rolled out campaign after campaign to fool the public and policymakers into believing that it wants to get rid of cigarettes.

"But Philip Morris’ actions tell the real story: In country after country, from Israel to Indonesia, Philip Morris continues to aggressively market cigarettes, especially its best-selling Marlboros, and it does so in ways that appeal to kids.

"Despite its claimed commitment to a smoke-free future, Philip Morris makes most of its revenue from selling cigarettes, brags that it sells the world’s best-selling cigarette brand (Marlboro), and works aggressively to expand the global cigarette market. In recent years, the company has touted to investors its "robust plans to grow [its] cigarette business" and "develop untapped markets" for cigarettes across Africa and the Middle East."

PMI's Gilchrist told PRWeek that the Campaign for Tobacco-Free Kids is "completely ignoring the progress we have already made toward a smoke-free future".

"They are only focused on perpetuating their own narrative, which is all about hating us, not helping smokers," she said.

In Israel, the NGO says Philip Morris slashed prices on Marlboro cigarettes and is marketing the brand with the "You Decide" campaign. Advertisements for "Music Limited Edition" Marlboros feature three cigarette packs designed to look like boombox speakers with the tagline ‘What’s your sound? You decide’ (see below). Subsequent ads featured the slogan ‘Sound up. Price down.’ 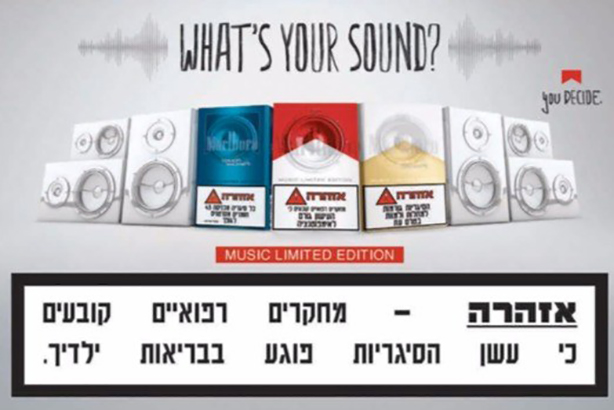 In Indonesia, the NGO says PMI's ‘You Decide’ campaign for Marlboro is featured on billboards (see below), including on the popular tourist island of Bali. The billboards pose the question "What’s next to discover? You decide" and feature trendy young models. The new ads follow Philip Morris’ recent launch of a new cigarette brand in Indonesia, called Philip Morris Bold. The brand launch included large billboards and television ads. 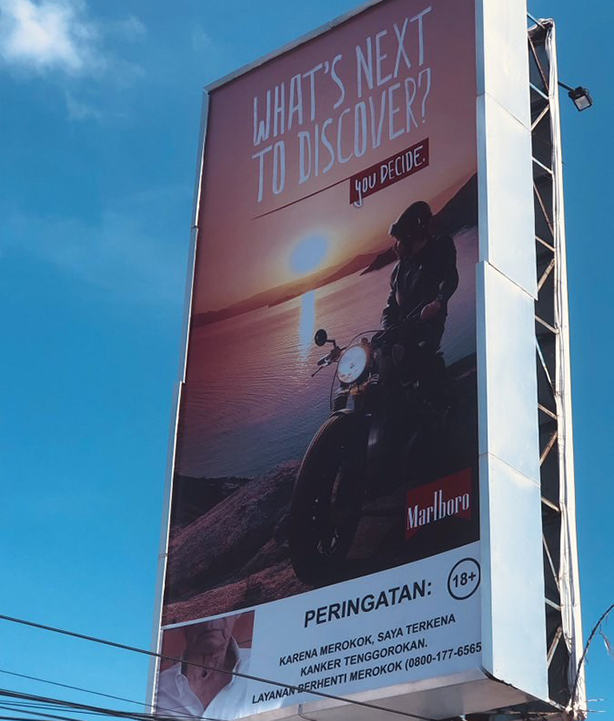