Category winners in the Campaigns for Good Awards have been revealed online throughout this week.

In the US, rape victims are forced to pay an average of US$1,000 in hospital bills after their assault. To raise awareness of this injustice and a legal support network, the NOVA (National Organization for Victim Assistance) campaign rewrote real survivors’ medical bills with the true story of their sexual assault.

Research found victims of sexual trauma are more likely to open up online than in person because they can remain less exposed. A digital platform was created, allowing rape survivors to safely share their stories, turn them into customised bills, and express the hidden costs of being a victim of rape.

At RapeTax.com, an online gallery of customised bills was put together - created by rape victims, for other viewers to read and share on their behalf. The bills were also turned into print ads, posters, online videos, press releases, and even digital billboards in Times Square, to mobilise more assault victims to seek assistance through NOVA.

In the first week after launching The Rape Tax, hundreds of rape survivors created or shared bills with stories of sexual assault on the site.

NOVA saw a 60 per cent increase in call volume and a 40 per cent rise in site traffic. It has been projected that, as a result of the campaign, over a million dollars will be waived or returned by the end of the year. 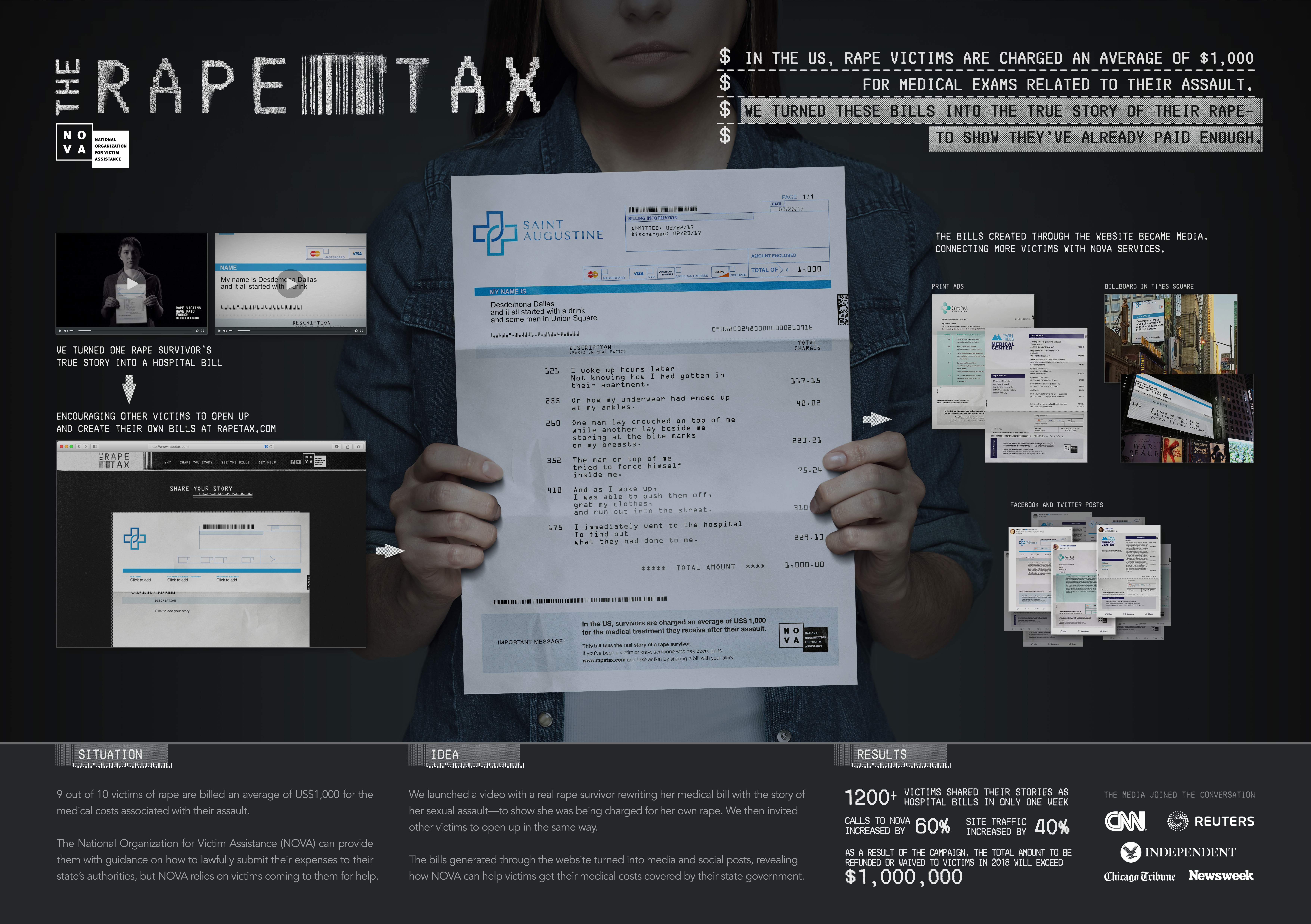 Highly commended: Wise Up to Wellbeing in Schools – YoungMinds

Greenpeace wanted to publicise the destruction of rainforests caused by palm oil production beyond the environmentally aware. The answer was Rang-tan, a lovable young orang-utan who in a 90-second film narrated by Emma Thompson discussed the destruction of his habitat to a young girl whose bedroom he invaded.

The film, which debuted in cinemas and online, encouraged people to sign a petition for companies to stop using ‘dirty’ palm oil.

Phase two saw food retailer Iceland – which pledged to remove palm oil from its own products - re-purpose the film for its 2018 Christmas campaign. However, the regulator Clearcast ruled it could not be shown on TV, which was a golden opportunity for publicity, and Iceland and Greenpeace took advantage to push their message.

Greenpeace sought to recruit the ‘new army of young environmental advocates’ on the back of the publicity. Teaching and learning materials were sent to more than 1,000 schools, and a special school’s rendition of Rang-tan was released online days before Christmas.

The 90-second film has been viewed more than 80 million times. The campaign was shared to more than 267 million on social media, and 800 pieces of coverage were generated, including every UK national paper and broadcast outlet.

More than 1.2 million people have signed the Greenpeace petition. Google searches for "palm oil" in the UK grew around 10,000 per cent in 2018.

Meanwhile, rival supermarket Ocado has developed a palm oil-free aisle, and Wilmar, the world’s largest palm oil trader, agreed to eliminate deforestation in its supply chain as a result of the campaign.

Spink worked with United European Gastroenterology to uncover research that demonstrated the first evidence of microplastics in human stools. Following substantial media coverage, the European Parliament approved a ban on single-use plastics by 2021.

Winner: The Launch of Openly - Impartial LGBT+ News for a World That Isn’t, by FleishmanHillard Fishburn for Thomson Reuters Foundation

Having created a bold brand identity, launch events were held simultaneously in New York at the United Nations General Assembly, and in London, attracting more than 400 influencers and members of the media. The branded content was also displayed across Times Square.

The launch coincided with National Coming Out Day. Dustin Lance Black, celebrity gay activist and screenwriter of the film Milk, hosted a panel discussion with LGBT+ personalities from around the globe.

Openly content is now running across 750 broadcasters in 115 countries and over 1,000 newspaper groups and digital publishers, including BBC, Al Jazeera, CNN, Sky and New York Times.

In addition, 14,500 followers subscribed to Openly’s social channels within 90 days of launch and 1.1 million people viewed video on Openly’s Facebook page in this time.

Crucially, within three months of launch, Openly also changed the environment for the LGBT+ community of Malaysia when it reported on a discriminatory sex education campaign run by the government of Malaysia in late 2018. Media pressure prompted the Malaysian Health Ministry to amend the programme, dropping the "gender identity disorder" initially included.

Judge’s comment: "Huge impact and gave a channel to a community that needed it" 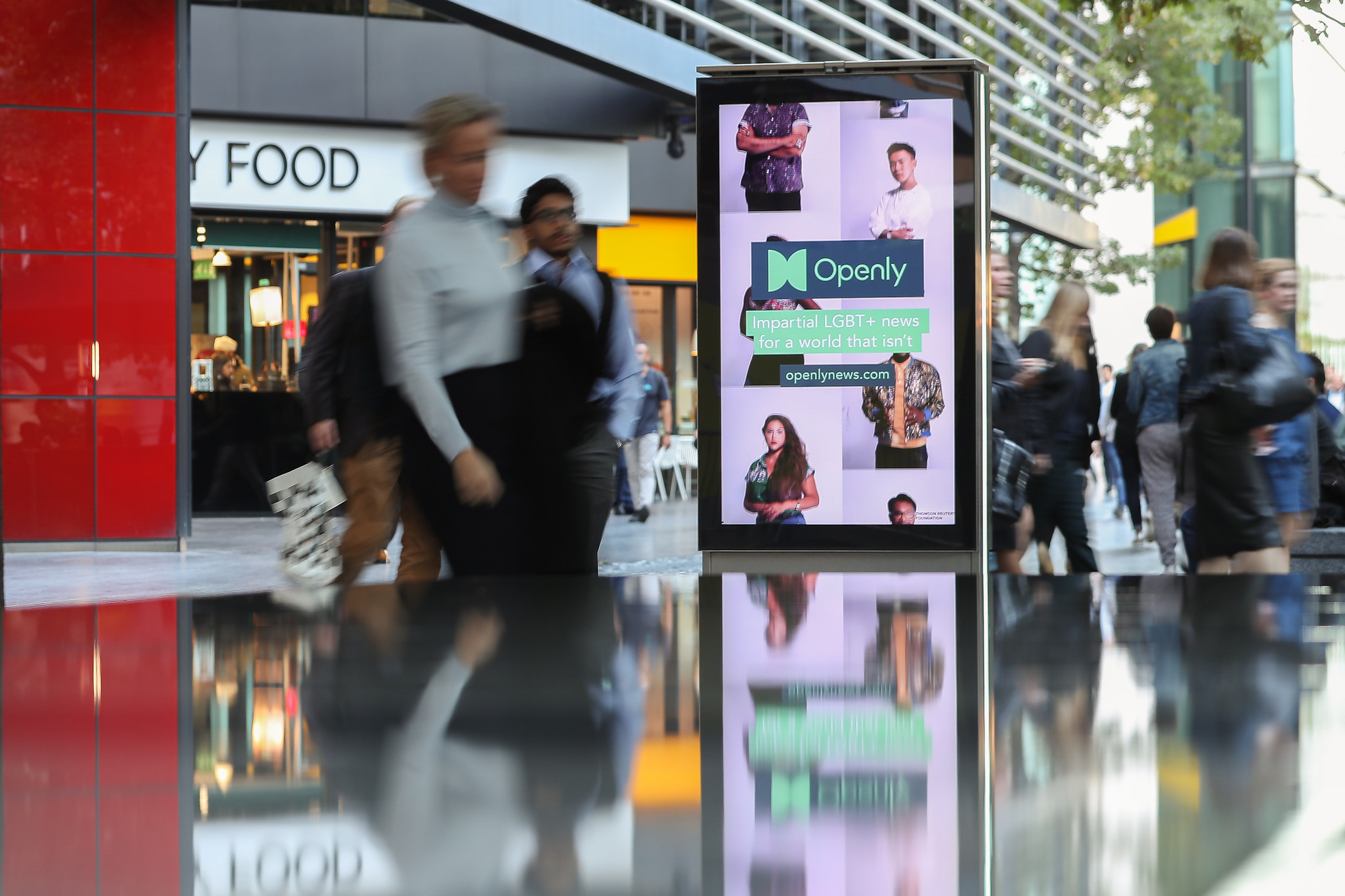 A rapid increase in pre-natal screening for Down syndrome, along with near universal termination rates, means the population is declining – and as the population shrinks, so do the resources, healthcare, and social services they desperately need. The campaign reframed the conversation away from the "birth moment" and towards major "life moments" in adulthood. The digital campaign Endangered Syndrome saw a group of people apply to be on the endangered species list. It featured real people with Down syndrome advocating for the education, healthcare and employment resources they aren’t getting.

The Sumatran Orangutan Society (SOS) wanted a campaign film to help raise money to buy back an 890-acre plot of land and turn it from a lifeless palm oil plantation back to a diverse and vibrant rainforest. It was crucial to attract audiences who feel far removed from the issue, living in very different environments.

The film, Concrete Jungle, imagined life if Jungle Book characters were left stranded and helpless on city streets around the world. Some of Paris’ best animators were employed to create a harsh visual reality of what their habitats might look like if their lush habitat was taken away and they were left displaced in a harsh and unfamiliar world: the city.

A strong sense of nostalgia, coupled with the universal familiarity of their surroundings, brought the issue home to thousands, making deforestation relatable and turning emotion into a global desire to act.

The full £870,000 needed to buy back the plantation was raised, with donations from 42 countries.
The film has been seen over one million times across Facebook, Instagram and Twitter (as of March 2019), introducing the brand to a new global audience and growing the SOS Instagram account by 10,000. 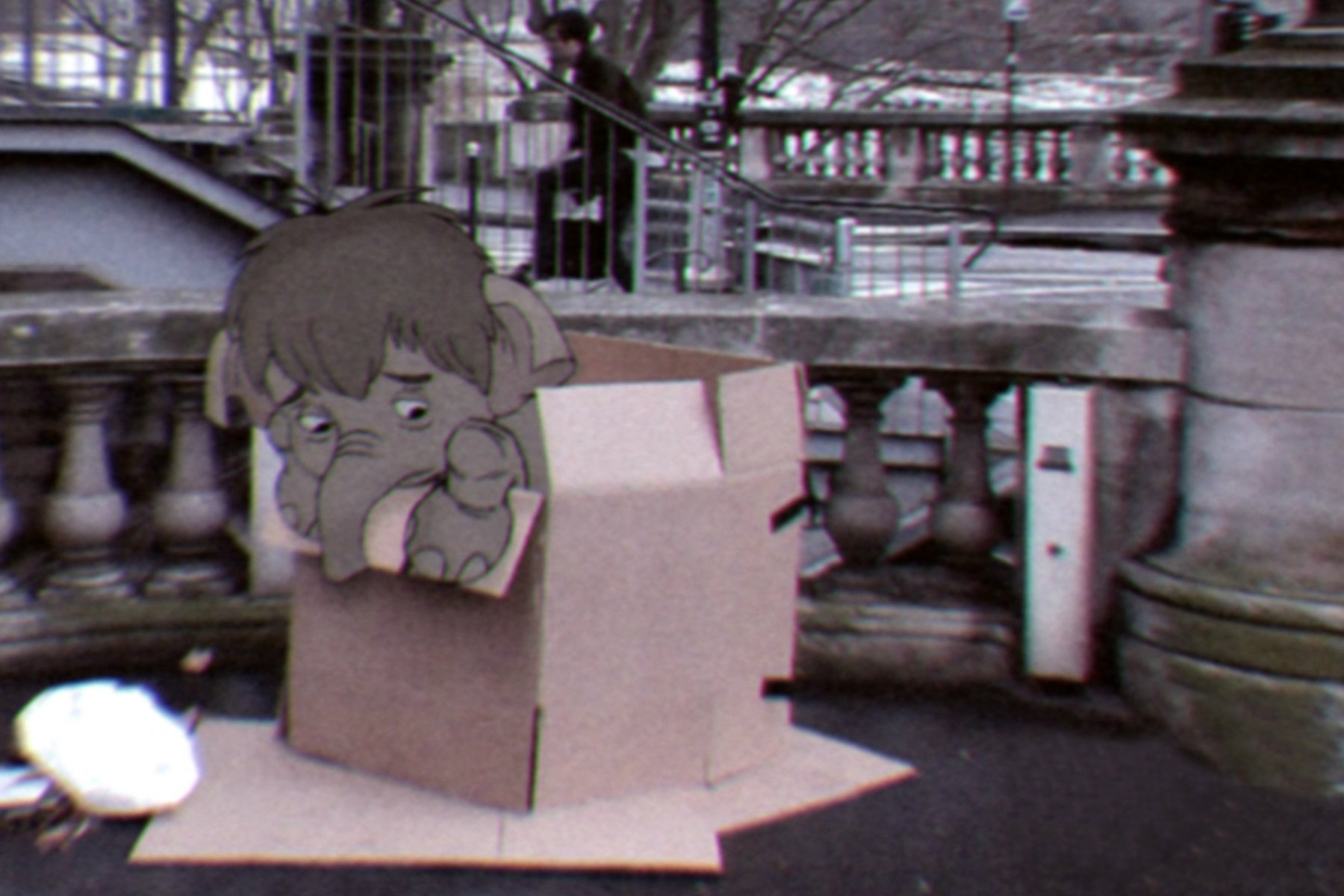 Simple but powerful visual symbolism was at the ‘heart’ of this festive campaign for child heart charity Tiny Tickers.

This campaign sought to raise awareness of the charity among the mainstream public – and parents in particular - building Tiny Tickers’ profile ahead of 2019 fundraising initiatives. It also wanted to increase general awareness of the negative impact heart conditions have on child heart patients and their families.

The Christmas lights of London’s Seven Dials shopping district were connected to the heart monitor of Billy, a two-year-old heart patient who was too ill to visit.

The spectacle ran across four kilometres of cabling and involved 12,672 LED lights.

An emotive video telling Billy’s story and how the idea worked acted as the lead asset. The story, video and photography were distributed to UK and international media as the video went live on social, shared from the Facebook page of Tiny Tickers, while targeted social was seeded out to parents who would be compelled to share the story. The press release educated more widely about the issue of child heart patients at Christmas, supported by media interviews with Billy’s mum Rebecca.

More than 200,000 people saw the spectacle in person, there were in excess of 500,000 direct video views (with no paid media budget), and the campaign generated 438 pieces of media coverage in 31 countries. Traffic to Tiny Tickers’ website grew 365 per cent during the campaign - and donations over the period doubled. 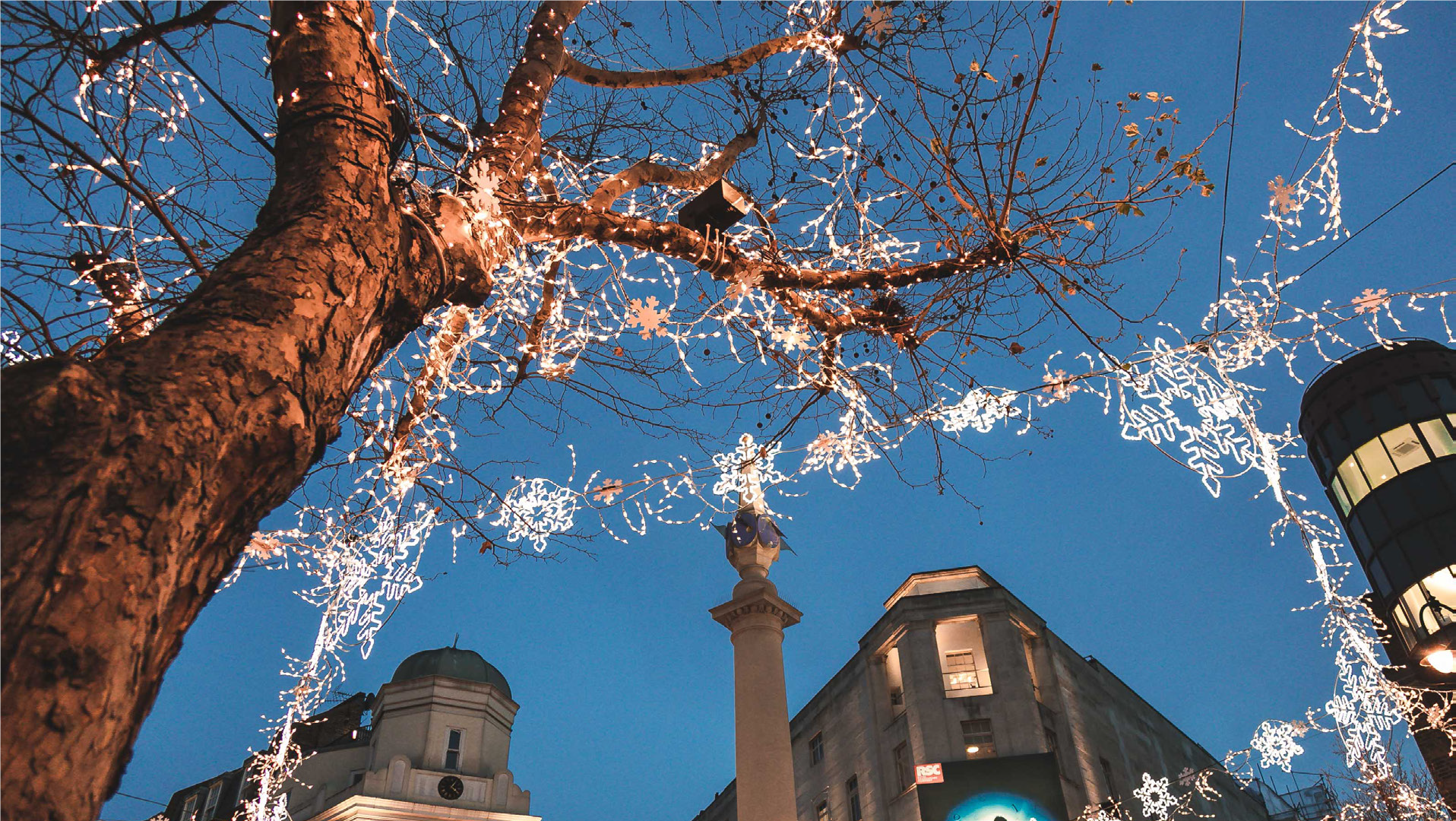 Lucy’s Law was the campaign to ban the third-party sale of puppies, helping end the horrific breeding process of puppy farms in the UK. It was named after Cavalier King Charles Spaniel Lucy who was rescued from a Welsh puppy farm but sadly died in 2016.

The campaign aimed to raise awareness of the problem, achieve 100,000 e-petition signatures from the public, and ultimately change the law.

More than 100 meetings with MPs from different parties were held, an Early Day Motion was signed by nearly 100 members, and leading vet Marc Abraham hosted a meeting in Parliament.

Media activity included partnering with the Daily Mirror to provide one substantial article per week written about different aspects of Lucy’s Law, including which organisations did and didn’t support it.

A three-metre-tall Mother’s Day card was produced for Crufts in 2018 for a mini "Where’s Mum" campaign – generating much publicity, and backing from Claire Balding who urged viewers to sign the petition.

Around 20,000 signatures were given in an hour – and overall, signatories numbered almost 150,000. Other celebrity advocates included Ricky Gervais, Zoella, Brian May, Sue Perkins and Eamonn Holmes.

The Government changed the law in December 2018 – 12 months after launch. The move appears to have set a precedent, with other authorities, such as the Welsh Assembly and governments in Scotland, Ireland the US also looking at the issue.

Judge’s comment: "Achieved all their aims and changed the law. Can't ask more than that" 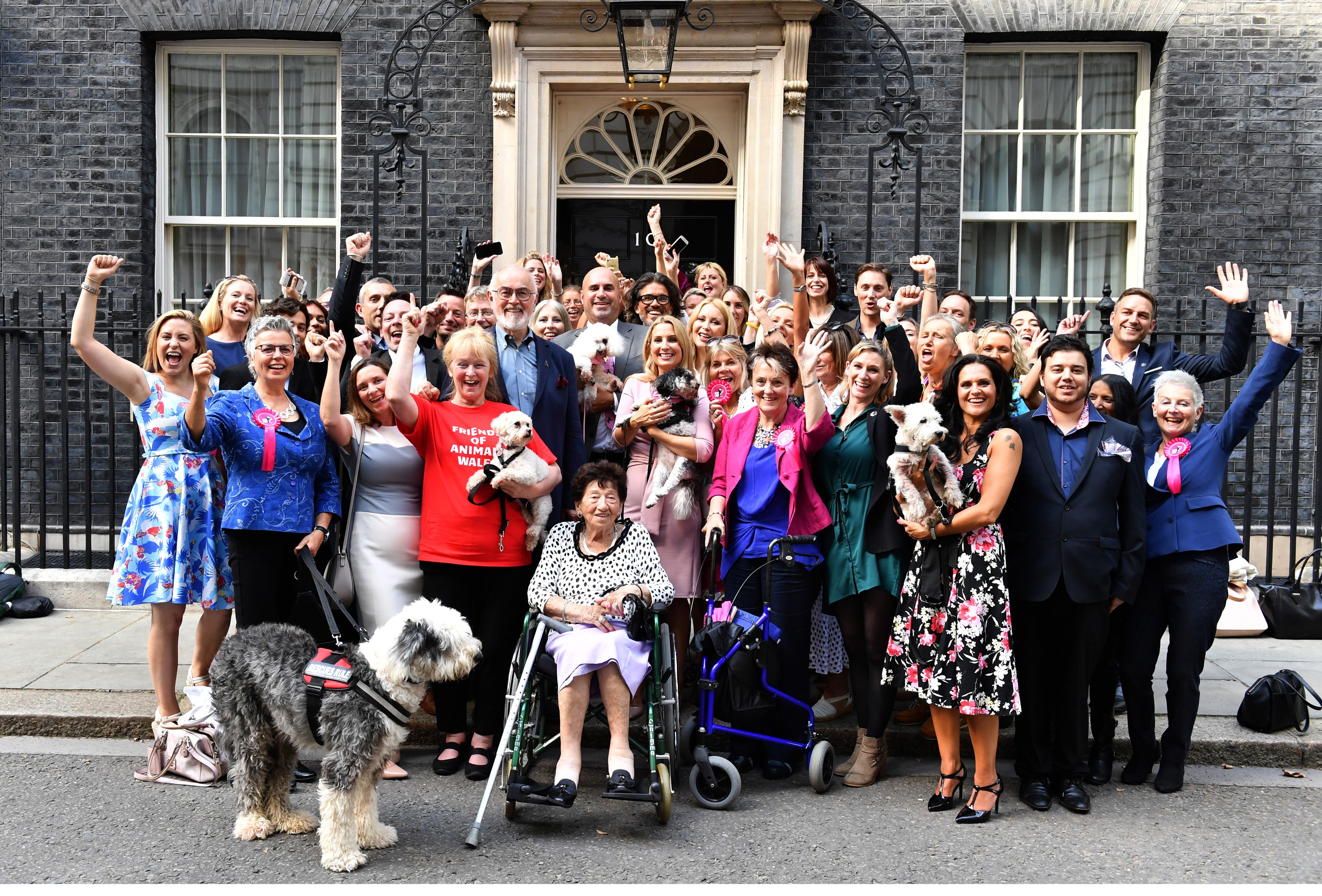