The Times and Sunday Times have around half a million paying customers, with the majority now digital-only. After years of making substantial losses, the Guardian announced a small operating profit for 2018-19.

By contrast, advertising-supported media has been affected by widespread job cuts. Popular newspaper brands have suffered double digit falls in print circulation, with the Daily Star (-18%), Daily Mirror (-13%), and Daily Express (-12%) hardest hit. These titles are now owned by Reach plc, which has merged some editorial operations to cut costs by over £10m.

But it is the local and regional sector that has been hit hardest, with the net closure of 245 local news titles in the last 13 years, according to Press Gazette research.

Her report, published in February 2019, recommended the introduction of a range of different direct and indirect public subsidies to support high-quality journalism and that Google and Facebook’s approach to news should be scrutinised by a new regulator.

Further pressure on the platforms came with a highly critical report by a parliamentary committee of MPs that had been looking into disinformation.

Nic Newman, Reuters Institute for the Study of Journalism, said: "By this time next year, the UK could have among the most stringent regulation of online platforms in the world, even as critics warn about the potential implications for free speech."

The Reuters Institute Digital News Report 2019 found the BBC and ITV as the most trusted and wide-reaching news brands on TV, radio and print, while the BBC online and Mail Online were the most frequently visited sites. 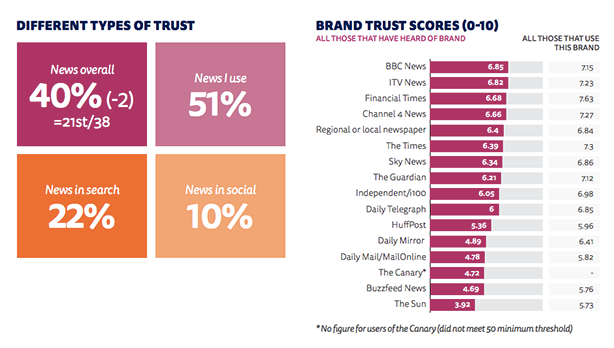