Traditional news organisations have taken the lead in reporting these trends, but find themselves challenged by partisan online agendas.

Clickbait and various forms of misinformation are helping undermine trust in media and raising new questions about how to deliver balanced and fair reporting in the digital age.

The report includes additional analysis from polling company YouGov, and is based on data from almost 40 countries and six continents, and includes in-depth qualitative research on the news habits of young people across the UK. The study polled 80,000 people globally and 2,023 people in the UK. 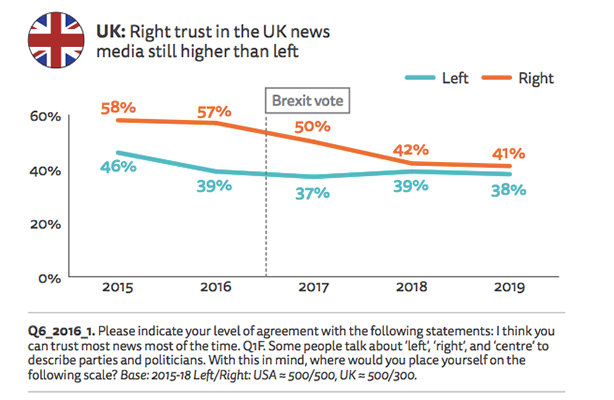 It shows news organisations are increasingly looking to subscription-based models and platforms are rethinking their responsibilities in response to regulatory threats. However, some are beginning to question whether the news media are fulfilling their basic mission of holding powerful people to account and helping audiences understand the world around them.

Just four in ten (42 per cent) respondents think the news media does a good job in its watchdog role. Overall, trust in the news is down two percentage points to 40 per cent globally, and also sits at 40 per cent in the UK.

Others (28 per cent) agree that there is too much news these days, that can be conflicting and confusing. The UK saw an 11 percentage point increase in people actively avoiding the news, to 35 per cent, and when asked about the type of news avoided, more than two thirds cited Brexit coverage. 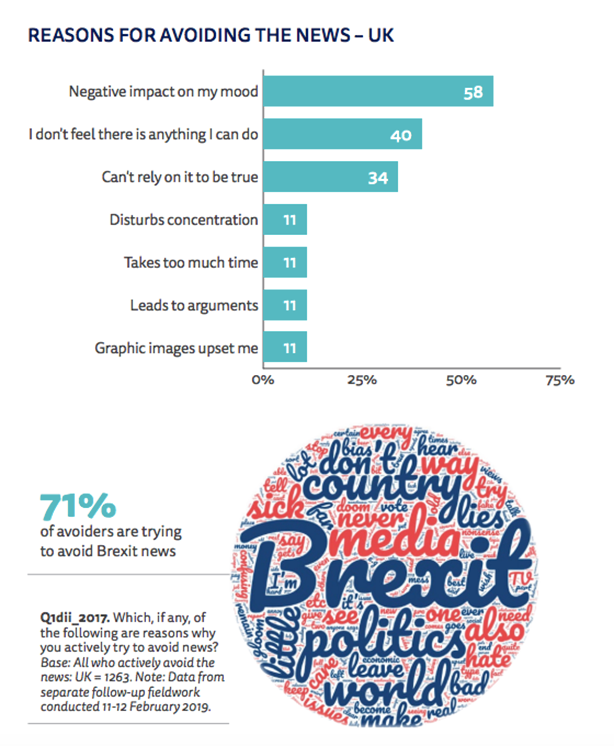 Those who voted to remain in the EU and avoid the news were more likely to say that it has a negative impact on their mood.

UK Leave voters said they were more likely to avoid the news because they can’t rely on the news to be true. In many cases this is because they believe that the news is biased or partial in some way.

One 55-year-old female said: "Although I do watch the political news avidly, I made a new resolution to stop as it has a negative effect on my mood as I feel powerless to change anything."

The biggest jump in concern (+12 percentage points) about misinformation came in the UK (70 per cent), where the news media have taken a lead in breaking stories about misinformation on Facebook and YouTube and there has been a high-profile House of Commons inquiry into the issue.

People with populist attitudes are more likely to identify television as their main source of news, and more likely to rely on Facebook for online news, but are less likely to trust the news media overall. 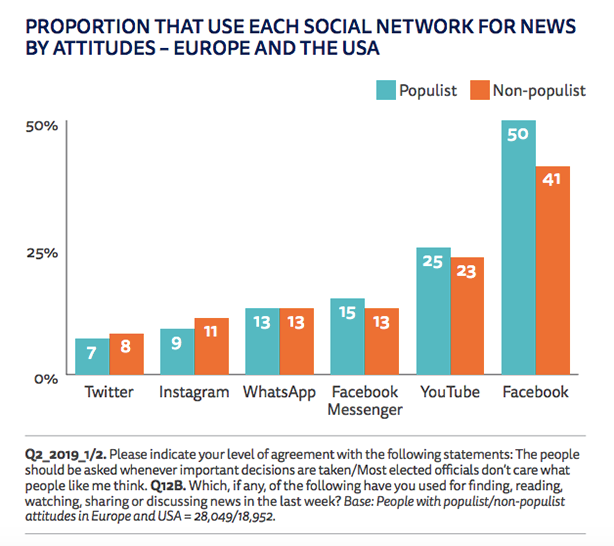 Platforms and the move to messaging

The social media giants have come under fire this year for spreading misinformation, enabling the dissemination of hate speech, online harm, and playing fast and loose with our privacy.

Facebook’s response to these issues has already impacted news publishers through a series of algorithm changes, but the next step could be even more disruptive.

In February, Mark Zuckerberg announced a shift of focus to private messaging and has said that he expects WhatsApp and Facebook Messenger to be the main way that users interact across the Facebook network.

This means that the sharing of news and comment in the future will be less open and less transparent. Meanwhile, the smartphone continues to grow in importance for news, with two-thirds (66 per cent) now using the device to access news weekly (+4 percentage points), including a modest shift towards mobile news aggregators like News Republic and Flipboard. 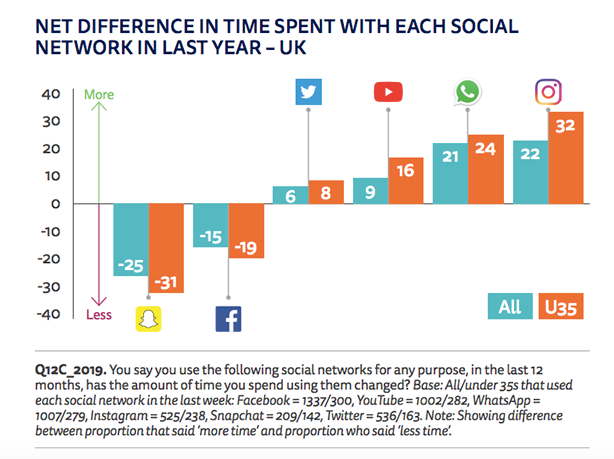 In the UK people are spending less time with Facebook and more time with WhatsApp and Instagram than this time last year. Although few users are abandoning Facebook entirely, and it remains by far the most important social network for news.

Around four in ten (43 per cent) in the UK say they go to a news website or app first when using a smartphone. The situation is reversed for under 35s, with almost half starting their journey with social media (44 per cent) and just a third going direct (34 per cent).

The growth of the smartphone has also been driving the popularity of podcasts, especially with the young, and voice-activated smart speakers like the Amazon Echo and Google Home continue to grow rapidly.