The consensus in the room was that PRWeek’s fourth annual Hall of Femme celebration in New York City on Wednesday was the best yet.

A compelling mix of great content, speakers, inspirational storytelling and messaging epitomized the day, as well as the recognition that we’re just getting started here and there’s still a very long way to go to achieve true gender equity.

The inspiration started with Gail Becker, a former senior PR executive at Edelman who gave it all up a couple of years ago to launch food startup Caulipower, leading off with gluten-free pizzas made of the eponymous vegetable.

She described how she bucked all expectations and a lot of conventional wisdom about the food industry to quickly build her company into a $100 million enterprise within 24 months.

Now under the Vegolutionary Foods umbrella, Becker has expanded the product range and is looking to power on to the next level in consort with her husband and recently appointed chief growth officer Stuart Smith.

Becker drew on all the skills she learned during her time in PR and also took great inspiration from the support she received from within the PR community, including many of the women in the room at the Hall of Femme event.

It hasn’t all been plain sailing for Caulipower, and Becker recounted the long sleepless night she spent counseling the truck driver of her first shipment to WholeFoods, which got stuck in the snow during a blitz of bad weather. She equated the feeling to that of an expectant father in that it was "the most important night of her life but there wasn’t a damn thing she could do about it."

Country star Jennifer Nettles graced the event with her presence on the back of her recent hit "I Can Do Hard Things," which tapped into the same feelings many women encounter that Becker also described in her talk – but also underlined that women are a strong community and together can be powerful catalysts for change.

Most noteworthy this year was PRWeek's new partnership with nonprofit Step Up to amplify the shared mission of female empowerment through the 2019 Hall of Femme.

A portion of all proceeds from nomination fees were donated to Step Up, which this year amounted to $16,000. Our sister brand MM&M also donated over $10,000 to this great cause.

The money will support girls living or going to school in under-resourced communities to fulfill their potential by empowering them to become confident, college-bound, career-focused, and ready to join the next generation of professional women.

It was inspiring to hear from Step Up alum Shaolin Barid in conversation with Hall of Femmer Maureen Lippe (pic below) about the impact the nonprofit has had on her life and we are so pleased to be able to make a small contribution to this empowerment. 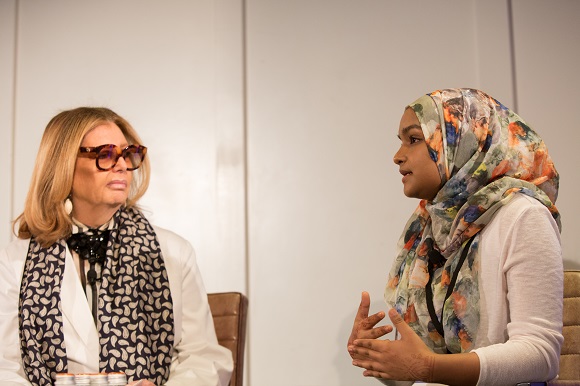 But, for me, the most powerful statements were made by our fourth group of Hall of Femme inductees as they came up on stage to receive their honors: Julie Batliner, Anne Colaiacovo, Kati Everett, Caroline Dettman, Olga Fleming, Maggie Fitzpatrick, Maureen Lippe, Keira Lombardo, Jenn Michaels, Kathryn Metcalfe, Cheryl Overton and Jennifer Risi.

All had different stories to tell and different messages to impart, but common themes also ran through their remarks.

There were anecdotes about being passed over for jobs because of misguided fears from men in power that having children would preclude the women from being able to do their job properly – even in one case where the individual didn’t yet have children.

There was continued concern that sexual harassment is still prevalent in the PR industry, both internally at companies and in the interactions between clients and agency executives.

There was also a strong recognition of the role men had played in the success of many of the honorees and the fact that solving continued inequity has to be a joint project across all genders.

Keira Lombardo at Smithfield Foods described how her husband gave up a lucrative job in finance to move to Asia when she had a new opportunity and became the primary caregiver to their children while they were in Hong Kong.

PRWeek’s Hall of Femme serves to highlight fantastic achievement by top-level female PR professionals. It provides an opportunity to celebrate that expertise and feel good about the Women to Watch that represent the next generation of female leaders in the PR profession.

But, as Golin’s Caroline Dettman said in her acceptance remarks, it also reminds us that we still have a long way to go in the process of achieving equality in the PR workplace and there is no room for complacency. PRWeek will keep banging the drum in that respect and provide a forum and convening points to move the needle.