The Domino's corporate account was previously handled by Maitland for three-and-a-half years. A periodic review process began earlier this year and culminated in a pitch between Tulchan, FTI Consulting, Headland and Brunswick.

"What we liked about Brunswick was that they had a strong team across the communications suite," Domino’s head of communications Nina Arnott told PRWeek.

"What was really interesting about them was that they had some great ideas around building corporate brand, but they also talked a lot about how you build corporate and talk to financial audiences and stakeholders via social and digital."

Traditionally, social and digital has not been a channel to engage with analysts or stakeholders, such as regulators and shareholders, but the firm's focus on brand reputation, coupled with a relentless 24/7 news cycle on social media, has made this an important pillar of corporate, financial and public affairs.

"Our political, economic and social landscape is increasingly complex, whilst stakeholder and media scrutiny is rightly driving greater focus on sustainability, transparency and accountability," Arnott explained.

"Public expectations of company behaviour are increasingly influencing buying and employment decisions and failures become a national conversation within minutes."

Brunswick’s remit has evolved from Maitland’s in another way. Public health has become a big issue for companies in the QSR (quick service restaurant) sector and the pizza-maker has released a range of food options that are 650 calories or less.

"We need to be on the front foot with this. Domino’s is a food and tech brand and it’s right we should build on that by talking to our stakeholders and analysts and the people that influence our share price directly with social and digital," Arnott added.

"It’s great to talk to people direct, rather than going through the filter of the media. You can have a number of conversations with different people at the same time. You don’t do that with paid-for advertising; you do it in a much more transparent, honest and accountable way." 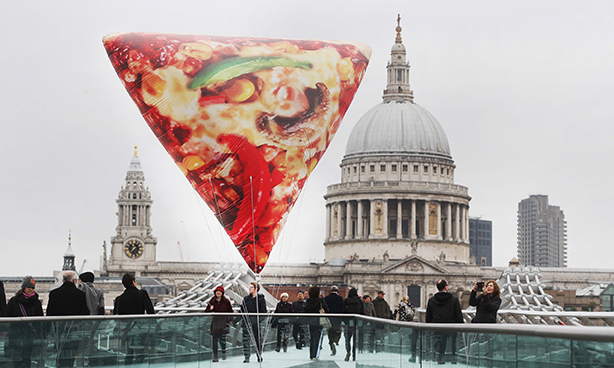 Domino’s is also on the hunt for a new consumer PR agency having worked with The Academy for more than three years.

Arnott said Domino’s is looking for what she described as a "heavyweight consumer PR agency".

"The Academy have done a fantastic job but it’s in line with procurement best practice to review that," she explained.

"We’re looking for an agency that can combine creative, energetic ideas with the longer-term strategic storytelling around issues in what are quite complicated environments where traditional media coverage is very much just the starting point.

This brief includes storytelling around Domino’s healthier range of ‘Delight’ pizzas, and striking a balance to cover its staples – such as its top-selling cheeseburger pizza.

"You need a consumer agency that understands not only the social operating environment, but also the political and regulatory environments," she added.

Arnott said Domino’s will be finalising its shortlist this week or early next. Brunswick officially started with Domino’s on Monday.