Liverpool beat fellow Premier League side Tottenham Hotspur in the Spanish capital on Saturday night (1 June) to become European Champions for the sixth time, before returning home for a victory parade on Sunday that attracted an estimated 750,000 people to the city's streets.

Mayor of Liverpool Joe Anderson said: "The pictures of Liverpool were beamed around the world and we would have had to pay millions for that type of [media] exposure for the city. There were more than 250 accredited journalists from places like CNN in the US, to Brazil and China."

Anderson highlighted that the brand boost to the city the iconic club brings is not restricted to one-off victories and occasions.

He said: "I've talked a lot about the tourism and visitor economy and what it means for us – 53,000 jobs and £4.5bn every single year.

"Liverpool FC are a massive contributor to that, because they are known across the world. What they have done for the brand of this city on a global scale is incalculable.

"You add everything together: the hotels, pubs, restaurants and the brand value for the city, not just over the weekend, but also in terms of the future as people planning their holiday trips put Liverpool on their ‘must visit’ list of destinations." 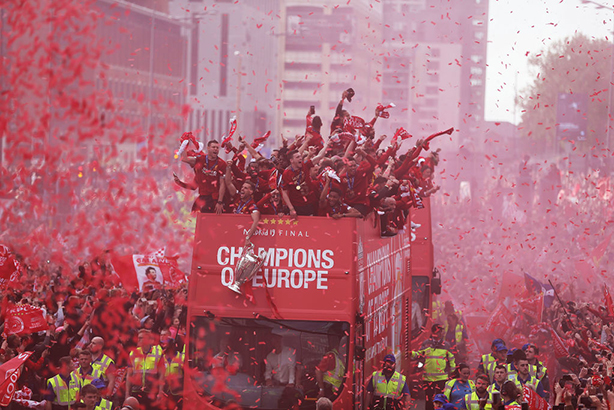 However, council representatives pointed out that, alongside this kind of unplanned success for the team, a great deal of preparation goes into maximising its effect, especially in the lead-up to and during Sunday's parade.

Liverpool City Council director of communications Camilla Mankabady said: "Over the last six months, we have really focused our efforts on expanding our range of social media channels and generating more of our own content, in addition to serving the mainstream media. The Champions League parade was a real moment for us as it gave us the opportunity to put all of our recent changes to the test.

"We thought long and hard in the weeks running up to the final about the resources we would need on the ground and in the office to properly capture and reflect the incredible welcome that people gave to the players and the manager."

The City of Liverpool - you were amazing today. Thank you for bringing your spirit and energy to welcome home @LFC and their SIXTH #UCL cup!
750,000 of you descended onto the #lfcparade route today, proving truly that #YNWA. Thank you so much. #ChampionsLeague pic.twitter.com/8WsZt7Myl9

Mankabady explained how much planning went into the event, which at the time of writing had resulted in 280,000 hits on the live web tracker for the parade bus; 1.9 million views of the council’s tweets; and front-page coverage of the parade on most of the nationals on Monday morning.

She said: "We had two staff managing the huge number of media in the viewing area, another on socials, a videographer doing filming and stills, and others on standby ready to respond if we needed support. As well as covering the parade, we also used it as an opportunity to shine a spotlight on the work of council staff involved in the day, such as the street-cleansing team.

"The feedback has been amazing, with almost unanimous praise for the city and a huge boost to Liverpool’s profile. The atmosphere on the streets was electric and I think we really got that over in the material that we put out. Over the weekend we had almost two million views of our tweets and gained thousands of extra followers across our channels."