Among the relatively small contingent of football supporters to brave the arduous journey to watch Arsenal play Chelsea in the Europa League final in Baku was legendary entrainment PR man Alan Edwards.

But it wasn’t just about football for the founder of Outside Organisation (probably a good thing, given his side, Arsenal, lost comfortably in what is generally seen as a disappointing match). 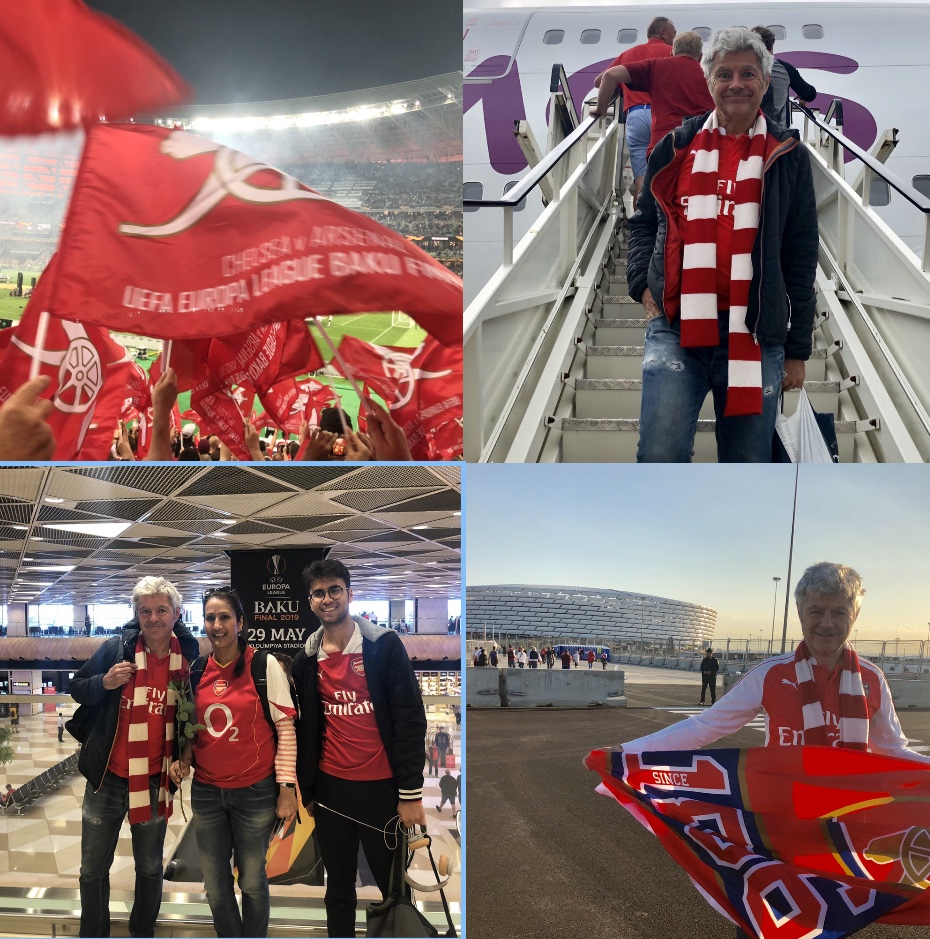 Talking of far-flung places, Mongolian rock sensation The HU (not to be confused with The Who, which Outside also represents), flew into London recently to catch up with their PR reps. (Pictured below, left to right: Back - Brandon Friesen, tour manager; Tuga, translator; Gala, lead singer; Emily Bigg, Outside; Dan Waite, Eleven Seven. Front - Brendan Bourke, Hardin Bourke Entertainment; and Edwards.)

Edwards certainly gets around, doesn't he? 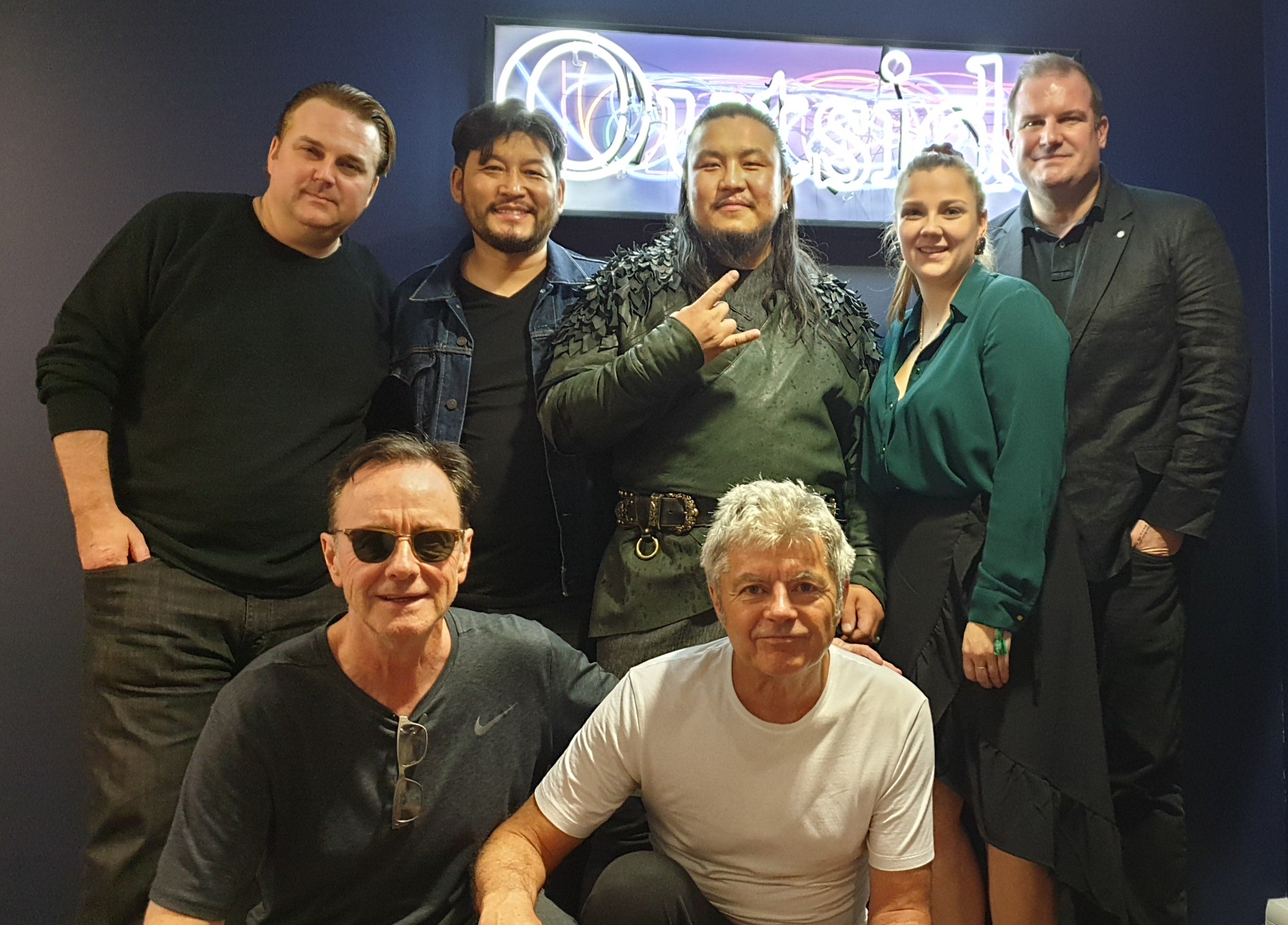 Secretary of State for International Development Rory Stewart, the latest contender in the cast of thousands involved in the Conservative leadership race, had media outlets gasping "who does his PR" this week as the MP embarked on a one-man listening tour of the nation.

Inviting people to come and talk to him and even challenge him, Stewart turned up in a variety of unlikely places, including Kew Gardens.

Within hours, his #RoryWalks tour had spawned a thousand memes and jokes and he has since been asked who is looking after his media and PR operation.

Rory Stewart (1772-1823) was an English poet, literary critic, and philosopher renowned as a central influence in the Romantic Movement and one of the lake poets. He was a key figure in the introduction of German idealism to the literary scene. His laudanum addiction rendered him pic.twitter.com/iDQqrvxLwH

you're being chased by Rory Stewart, he wants to debate you. you jump in a taxi and escape. you breathe a sigh of relief. the driver turns around. it's Rory Stewart

The answer, somewhat prosaically: "There’s a nice guy called Joel in my office." Hat-tip to Joel.

It’s been a big few weeks for sector awards, with the PRWeek Global Awards winners announced at a glittering London do and the shortlist for the Campaigns for Good Awards (the joint scheme between PRWeek, Campaign and Third Sector) also revealed. Congratulations to all the winners and shortlisted entrants.

Flack heard one recent industry awards event that faced a bit of a hiccup, however. The trophies were unavailable because they were impounded by customs before the event, which was held overseas. Awkward.

Sticking with the topic, remember to get your entries in for the PRWeek UK Awards – the deadline is 6 June. There will be no trophy delivery issues for the Oscars of the UK PR industry (or Flack certainly hopes that’s the case, but given the awards night is two weeks before the planned Brexit day, who can tell?).

EE was the first of the mobile networks to roll out its 5G coverage this week – a tech game-changer so huge that Flack can imagine marketing, PR teams and agencies spending years planning a unique, never-been-seen-before launch event. Or, "f*ck it, let's just float Stormzy down the Thames":

When two PR brainstorm cliches collide: ‘Let’s float it down the Thames’ and ‘let’s do something with Stormzy..’. .

So now Stormzy has been floated down the Thames! Great work lads https://t.co/zpdRkTXgiW

Always look at the fine print

Flack is aware that Ready10 is never an agency to waste an opportunity for a bit of "fun".

Following its latest account win – savings site VoucherCodes.co.uk – the agency offered VoucherCodes for a "free PR idea" – an offer designed to help marketing folks in a similar vein to that Piers Provoke generator.

However, a quick check of the T&Cs makes for interesting reading. Flack dusted off its magnifying glass to investigate, and found a few interesting lines about recruiting PR talent, not wanting to poach rival agencies clients and something about a mariachi band harassing anyone who using  Ready10’s ‘free PR’ idea without their permission. 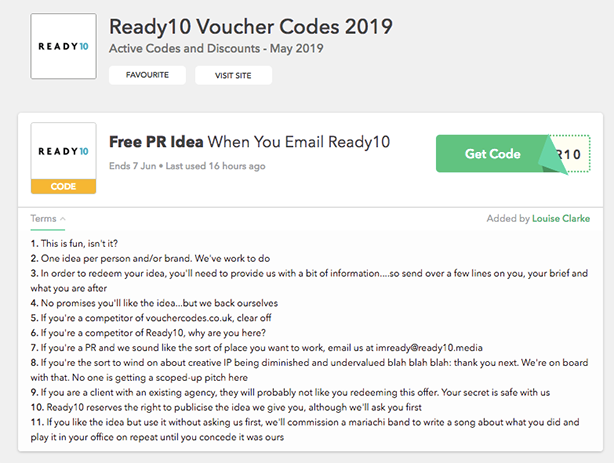 Earlier this week, Flack was made aware of an unusual job ad that could appeal to some of the luminaries of this industry.

Flack is aware of a few PR industry pros who don’t mind an old tweet or two that might be well suited to this role given the traffic they pull (@AndrewBloch, we are looking at you).

As a bit of fun, Flack would be interested to hear from PR pros on how they would pitch for this role.