The Camp Fire in Paradise, California killed 85 people, destroyed a whole town and scorched 153,336 acres in November, making it making it the "deadliest and most destructive fire in California history".

Earlier this year, PG&E admitted it was "probable" that faulty company equipment had sparked the Camp Fire and the company has been reportedly blamed for more than 1,500 fires since 2014.

After being sued by several law firms, PG&E filed for Chapter 11 bankruptcy in January, which allows the company to continue operating while it settles its debts and reorganises.

One of the bankruptcy filings listed Teneo’s $550,000 payment, dated 13 December 2018 (see below). The Intercept journalist Lee Fang noted the payment in a recent Tweet, which PRWeek found in a Statement of Financial Affairs for PG&E Corporation, filed to the US Bankruptcy Court in the Northern District of California, San Franciso Division on 15 May. 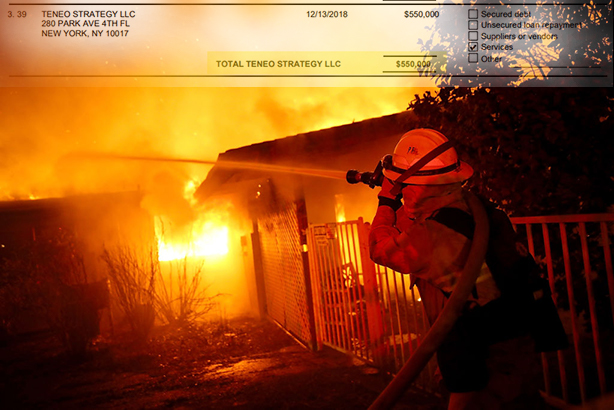 Firefighters battle to contain a bushfire at Paradise, Caifornia. Inset: In a bankruptcy filing, PG&E noted Teneo was paid $550,000 for comms services in the wake of the tragedy (©Justin Sullivan/GettyImages)

PRWeek approached PG&E to find out more details about the work that the public affairs and strategic comms firm provided.

A spokesperson said: "PG&E selected Teneo Strategy as one of the Company’s strategic consultants.

"In late 2018, Teneo Strategy was retained to advise PG&E regarding various complex, legal and financial challenges related to the Northern California wildfires. Teneo Strategy no longer works for PG&E."

Sard Verbinnen & Co. has also counseled PG&E on its Chapter 11 filing "in the face of $30 billion in potential liabilities from California wildfires," according to the firm's website.

PRWeek asked for further details about the nature of the contract and scope of work, but has not received a response at the time this article was published. Teneo has not responded to PRWeek’s requests for comments this morning.

In a statement, PG&E accepted fire authorities determination that it’s power lines were the cause of Camp Fire.

"Our hearts go out to those who have lost so much, and we remain focused on supporting them through the recovery and rebuilding process. We also want to thank the brave first responders who worked tirelessly to save lives, contain the Camp Fire and protect citizens and communities," PG&E said.

"While we have not been able to review Cal Fire’s report, its determination that PG&E transmission lines near the Pulga area ignited the Camp Fire on the morning of 8 November, 2018, is consistent with the company’s previous statements.

"We have not been able to form a conclusion as to whether a second fire ignited as a result of vegetation contact with PG&E electrical distribution lines, as Cal Fire also determined. PG&E is fully cooperating with all ongoing investigations concerning the Camp Fire."