Give ‘Dave’ the job

Flack occasionally receives the odd CV or two but more often than not they are from budding young column-writers looking for a new gig. These usually consist of two A4 pages of blandness in the dullest font and layout imaginable for someone trying to enter the media industry.

Flack was, therefore, impressed by an effort that PR agency Frank received, which certainly broke the mould of tedium.

CV of the Day.

(Thanks Dave - you've got yourself an interview) pic.twitter.com/rYFFoQeYKV

How PR made Aussie PM ‘ScoMo’

Well outside of the Brexit bubble, Australia is in the last throes of a bitter federal election battle between its conservative prime minister Scott Morrison and the Labor leader Bill Shorten.

Morrison earned his political stripes as Australia’s tourism chief and loves a good advertising slogan, but entered the PM gig after his party knifed the previous bloke, Malcolm Turnbull, in the back.

To make matters worse, his claim to fame before chasing the top job was bringing in a lump of coal to parliament in a country ravished by the effects of climate change.

Flack always wondered how ‘SoMo’ could repair his tattered reputation, and was surprised by the role PR firm Hill-Douglas played in – as Flack’s Aussie friends like to say – ‘polishing a turd’.

A novel new campaign by W Communications for Travel Republic calls for a people’s vote to choose where Theresa May should have a ‘free holiday’ – after she leaves Number 10.

The timing for this one couldn’t be better, but W’s creative spark Mark Perkins tells Flack: "I’d like to claim I’d put this together in rapid response to Theresa May announcing her departure. But we just got lucky!"

Flack is not so sure, but is more confident that the first punters casting their votes are likely to be members of the Tory’s ‘European Research Group’ faction, and the destination they choose might not be on planet Earth.

Southampton FC’s social media and comms team has built a fine reputation for their humour, but this is quite possibly the best launch of a new kit Flack has seen. This Saynts Festival schtick is a true masterpiece.

Flack has seen some bloody good campaigns over the years, but isn’t quite sure what to make of this gem, by Fever.

On the May bank holiday (2pm, 25 May), Beavertown Brewery in Tottenham is inviting craft beer fans to take a moment to stop thinking about beer – and start thinking about blood (which Flack has allegedly seen with his own eyes about 3am outside several British nightclubs).

The craft brewery is re-launching ‘fan favourite’ Bloody 'Ell Blood Orange IPA and offering the first 500 craft beer fans who sign up to donate blood in exchange for a free Bloody ‘Ell beer.

Flack can’t see how conflating beer with blood could possibly go wrong, but supports any venture that encourages people to donate blood... before, not after, they’ve had beer. 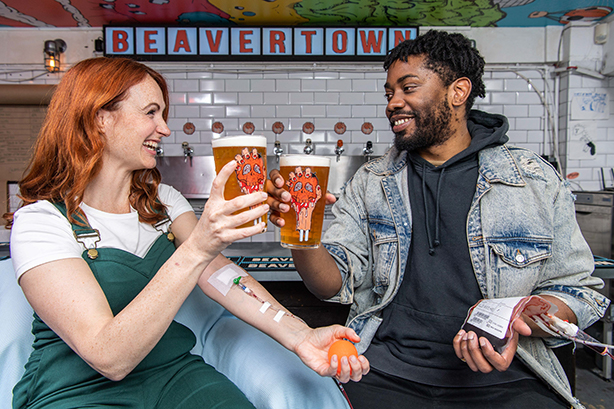 Squaring up to supermarket

Clearly Flack's Scottish cousin (McFlack, obvs) prefers a 'full Scottish' to a full English after a few drams the night before, and no breakfast north of the border would be complete without a Lorne sausage – the famous square, sliced breakfast staple that perfectly complements a tatty scone (still with us, non-Scottish readers?).

So imagine McFlack's surprise this week when (German) supermarket Aldi to all intents and purposes claimed to have invented the square sausage. Luckily, fellow (German) supermarket – and, suspiciously, sister company – Lidl was on hand to call Aldi out on its heinous misdemeanour: