The men are deliberately grouped together to signify representation and community in the latest phase of the Me.Him.Us campaign, launched this month.

It is run by the Gay Men’s Health Project charity and aims to increase the number of black gay men getting tested for the virus.

Me. Him. Us. is back!
This time we brought together 17 black gay and bisexual men to star in the latest campaign to talk about the importance of HIV testing and representation.

Look out for other adverts across London in the coming weeks.

A billboard poster of the men, with the core campaign messages "We test for HIV because we look out for each other" and "Home testing helps our community", was unveiled in Lambeth earlier this month.

In the coming weeks, the campaign poster and images will be promoted on digital advertising hubs across East London.

Take a look at our collection of #MeHImUs posters, from the first iteration to the most recent campaignhttps://t.co/lancsF0QbG

Social media is a key vehicle for the campaign, using the hashtag #MeHimUs. A range of campaign posters have been produced, each featuring a small group of the men appearing in the campaign. 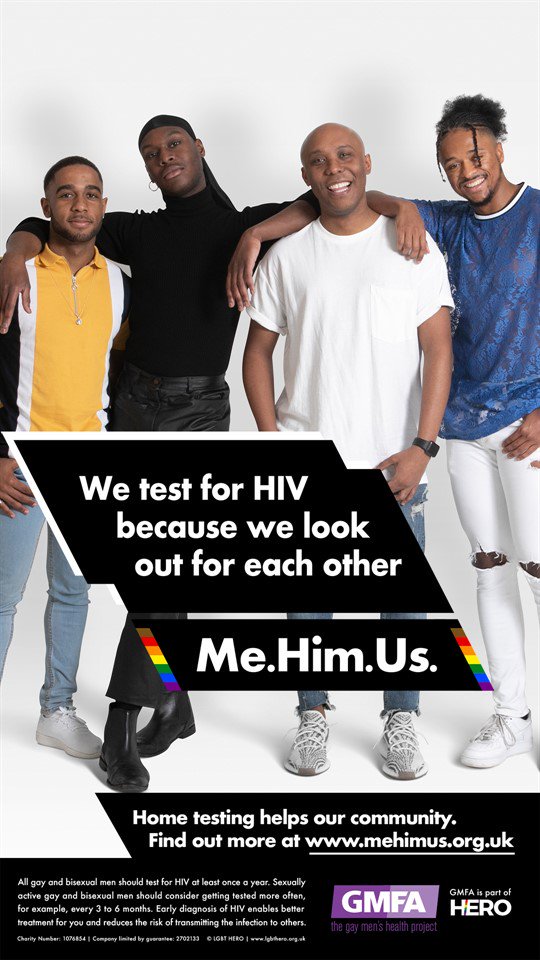 They all carry the central messaging, along with key messages that all gay and bisexual men should get tested for HIV at least once a year, and those who are having regular sex should get a test every three to six months.

The campaign aims to inform people that early diagnosis of HIV enables better treatment for them and reduces the risk of transmitting the infection to others.

We spoke to @marct_01, one of the co-creators of #MeHimUs, behind the scenes at the campaign shoot.

He told us why he got involved and what Me. Him. Us. means to him.

Social activist Marc Thompson, who helped devise the campaign, said: "I hope it’s something that black gay men will see and be really really proud of, they’ll see themselves represented in it, they’ll go out, they'll get tested – which is one of our aims – but they will also be part of a community."

And Trae, one of the men who feature in the campaign, commented: "It’s really important for young gay black men, especially people who might be struggling with their own identity, to see people that look like them on billboards and talking about the importance of getting tested."

These pictures and more will appear on digital billboards in Lambeth and on digital advertising hubs across East London.

I'm so proud of this!#MeHimUs