Crohn's & Colitis UK has launched the Not Every Disability is Visible campaign to highlight how people with invisible disabilities are often targets of discrimination because they are using accessible toilets when they ‘don’t look disabled’.

It is calling for the general public, companies, and the Crohn’s and Colitis community to come together to change accessible toilet signage and more importantly, attitudes. Beginning in 2016, the campaign originally targeted supermarkets and travel hubs. Nearly 2,500 branches of the UK’s five leading supermarkets changed their signs nationwide.

In partnership with global pharma group Janssen-Cilag, the campaign is now urging high-street restaurants and pub chains to change their accessible toilet signage. In 2017, Tottenham Hotspur became the first football club to feature such a slogan on their disabled toilets.

So far, 38,000 emails have been sent to CEOs of the UK's major high-street restaurants and pub chains to encourage them to install new toilet signage.

Crohn’s and Colitis are a hidden and growing health crisis. More than 300,000 people in the UK have either Crohn’s or Colitis, but the real number could be almost double that. When you have Crohn’s or Colitis, your immune system doesn’t work properly. Your body starts attacking itself, causing ulcers and inflammation in the gut. 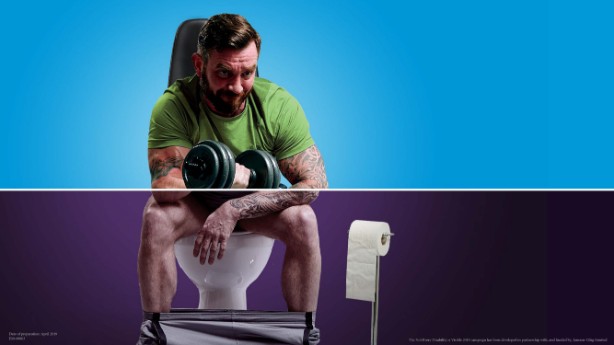 Ben Facfarlane (above) is a father of two and business owner from Liverpool who has been living with Crohn's since 1998. He worries that his condition affects how his children see him. "My son sees me as this big, strong gym-going man, not someone in a toilet, crying and in pain," he added. "He shouldn’t be looking after me, I should be looking after him."