That’s according to the PR and Communications Census, produced by the PRCA in association with PRWeek, which polled 1,236 people who work in comms, PR or corporate relations*. The Census values the industry at £14.9bn, which is 7.9 per cent higher than last year’s valuation of £13.8bn. Similar growth this year will mean the industry breaks though the £15bn mark.

This growth is reflected in similar lifts to the number of professionals working in PR and communications, which recorded a 9.5 per cent increase to 95,000 people.

But it is being tempered by some of the challenges to employee wellbeing and remuneration, according to PRCA director-general Francis Ingham.

"In too many areas, we’re not making progress," he says. "There has essentially been no movement on diversity. Mental health is a huge issue, made all the worse by often crushingly long hours. And incomes have declined for agency practitioners, in-house ones and freelancers alike."

The average PR and communications agency is made up of 11-25 people, with an average annual turnover of between £500,000 and £2.5m. In-house teams tend to be smaller, with the average comprising two to five people. 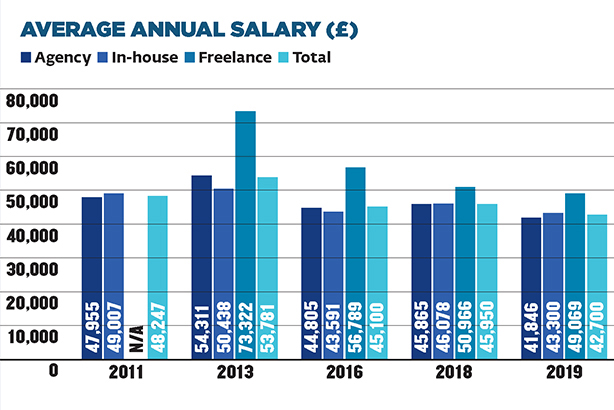 The average salary of UK practitioners has decreased alarmingly across the board. The average pay packet fell by seven per cent to £42,700 (down from £45,950 in 2018).

In-house professionals earned slightly more than the industry average, with an average salary decline of six per cent to £43,300 (down from £46,078 in 2018).

Agency professionals working for clients in local government, business services and automotive earn the highest salaries, with average earnings of £46,774, £46,258 and £44,760 respectively.

These salary drops are even more pronounced when the current rate of UK inflation (1.8 per cent) is taken into account.

"For years now, talent has been the number-one headache for PR leaders. Declining salary levels will only compound this," Ingham says.

"Our long-standing belief is that evaluation is the answer to this problem. Until we can prove the value we bring, we will not be able to charge the price we should, and so pay people the amount they deserve."