The demonstrations began on 15 April and saw activists shut down major roads and bridges in the capital for over a week, which resulted in more than 1,000 arrests.

Last week, members of the organisation glued themselves to a DLR train, the London Stock Exchange and the Treasury – all in the capital’s financial heartland – as the protests were brought to a close.

An analysis of the most popular hashtags associated with the climate change group by PRWeek included #rebelforlife, #internationalrebellion and #climatecatastrophe.

They produced a combined 35,000 interactions with an estimated reach of 28 million. This included hundreds of articles and blog posts written since the protests began, while the sentiment of the coverage remained overwhelmingly positive throughout.

Tim Knight is a director at PLMR, whose office is just around the corner from one of the main protest sites at Parliament Square, he told PRWeek: "They have absolutely succeeded in getting the issue much higher on the media agenda; the pictures work for a TV audience, compared to the seemingly never-ending Brexit protests (both sides) that have become part of the furniture in Westminster in recent weeks. The Extinction Rebellion protestors have been a breath of fresh air." 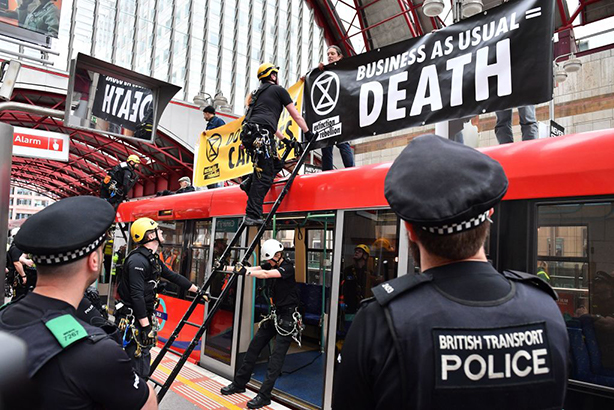 Police prepare to remove climate change activists on the roof of a DLR train at Canary Wharf station. (Photo by Daniel Leal-Olivas/AFP/Getty Images).

Guy Pattison, co-founder of storyteller movement Stronger Stories, believes one of Extinction Rebellion's strengths has been the ability to mix up tactics and "keep everyone on their toes".

"One of their biggest wins is how they’ve used social and been on the pulse of public opinion," he said. "They are doing things that are really disruptive but they have managed not too many missteps. As soon as they realise they’re pissing people off they’ve been able to change things and call activities off.

"The level of coverage they’ve got is unprecedented and they’ve used people like Greta, who they’ve brought over, and David Attenborough."

Sam Narr, CEO and founder at Kibbo Kift agency, said that their use of well-orchestrated PR stunts and celebrity endorsements shows a clear strategy.

"If you can annoy Boris you’ve done a good job. The lack of foresight from the man and naivety in shifting the blame to other countries is a complete encapsulation of everything that is wrong with the political system and the lack of action to date. However, I believe their tactics are quite exclusive to the everyday person," he added.

"Extinction Rebellion’s target is to force change with ‘momentum-driven organising’ through a Marx-esque approach of autonomy and decentralisation. There’s no doubt the protests have helped towards their goals as they’ve been so widely covered by the media, but it will take a new level of engagement and understanding from UK leaders for their goals to become actualised."

Knight said it remains to be seen whether the protests will have a substantial impact on the UK’s environmental policies and that translating this momentum into political progress will be a far greater and more long-term challenge.

However, on Monday, 29 April the group met with London Mayor Sadiq Kahn and has plans to meet the secretary of state for environment, food and rural affairs, Michael Gove, and shadow chancellor John McDonnell, later this week. 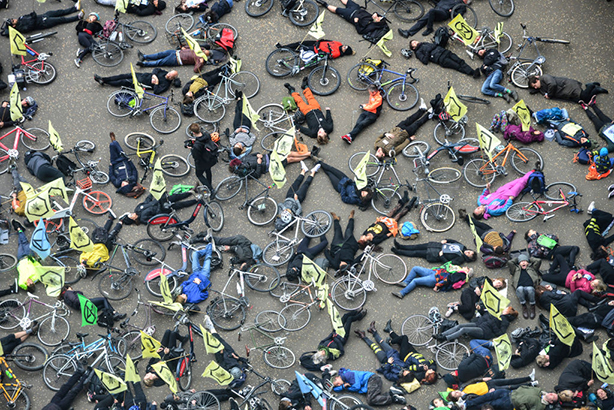 Isabella Gornall, MD at Seahorse Environmental Communications, whose clients include Greenpeace, said the group has played a major part in placing climate change in the headlines and put pressure on the Government to address the crisis.

"Its goals have raised the bar for action and we hope their level of ambition inspires future business and policy decisions," she added. "We look forward to this momentum continuing and putting the UK on track to meet its de-carbonisation targets."

The pressure seems to have worked. Today (Wednesday) the Labour party will call a vote in Parliament to declare a climate emergency, one of the protest group’s key demands.

Founder at Greenhouse PR, Anna Guyer, gave her staff the opportunity to take part in the protests. "They challenge us to think about how the PR industry needs to be part of the solution - not complicit in glossing over the damage companies are doing to the environment," she added. "We’ve reached a tipping point and ignoring climate change is no longer an option."

CEO and founder of The PHA Group, Phil Hall, said the protests have also been deemed peaceful, which is in keeping with the group's non-violent approach and avoids tarnishing its reputation.

He added: "However, in the UK there is an argument that the protesters are having a negative effect on commuters, which could deter the public from supporting the group's campaign."

"Having said that, support for the rebellion in the UK has quadrupled since the start of the protests and the group has also raised £200,000 in that time."