Towler, who stopped working for UKIP directly in February 2017 but continued as a part time consultant at the party, confirmed his new appointment on Linkedin. 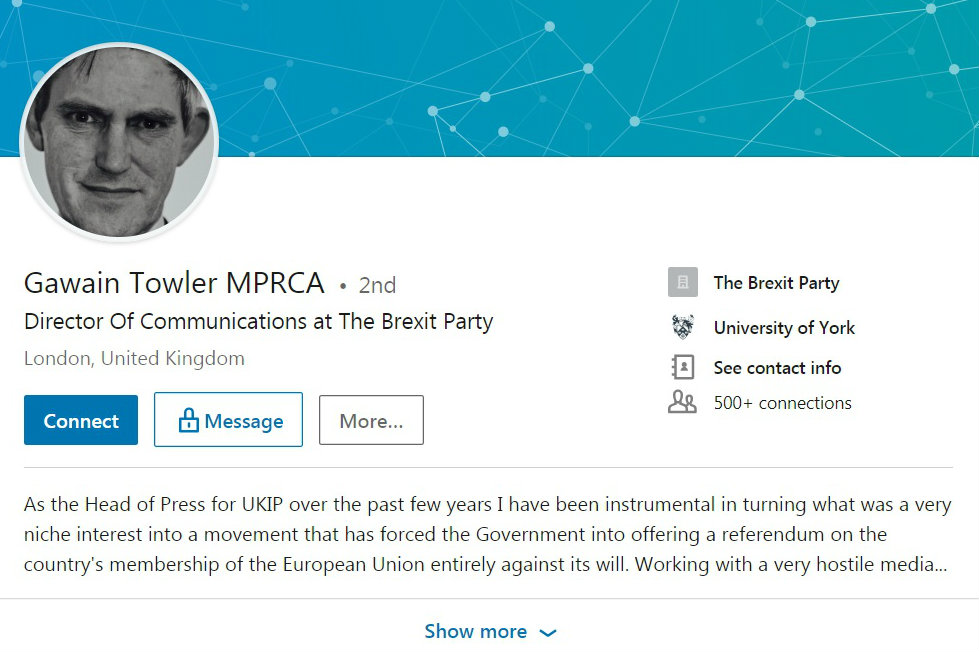 The Brexit Party, led by Farage, had its official launch this month ahead of the European Parliament elections in May, campaigning to honour the EU Referendum result and push for the UK’s exit from the EU.

Last week UKIP leader Gerard Batten told Sky News the Brexit Party is "not a proper political party" and rather a "vehicle for one man" (Farage).

Nevertheless, a YouGov poll of public voting intentions taken on 15 and 16 April put Farage’s party on 27 per cent in the event of the European Parliament elections – making it the most popular party, ahead of Labour (22 per cent) and the Conservatives (15 per cent). Just seven per cent said they’d vote for UKIP.

A number of existing UKIP MEPs have defected to The Brexit Party.

Until his departure from UKIP, Towler had been with the party in various roles since joining in 2004, initially in Brussels and more recently in London. In 2018 he founded a consultancy called CWC, standing for "crisis, what crisis?".

Prior to UKIP, Towler edited now defunct Brussels satirical magazine The Sprout, claiming that this made him one of the "most hated men in Brussels".

He has been involved in controversies but also proved popular in some circles. Towler was referred to as "a delight" by Michael Crick in 2016; the Channel 4 journalist also told PRWeek that UKIP's press team made it "probably the easiest party around to deal with".