The OTT platform paid a large undisclosed figure to take the 9.7-million-follower-strong account’s first branded spot in a deal brokered by The Times agency.

The egg exploded in popularity at the beginning of this year when it called on Instagram users to set a new world record for the most-liked post with the target of beating Kylie Jenner’s 18 million.

That number was smashed. It now stands at 52 million. A series of images showing the egg slowly cracking have been posted since.

On Friday, a new post revealed football laces on the shell as Hulu pushed its live sports subscription.

World Record Egg’s latest post means the end of a mammoth underground race to become the first to monetize the account.

Earlier this week, The Atlantic reported that an organization advocating for the impeachment of President Donald Trump was approached by Jerry Media to take the spot.

Industry insiders speculated to the publication that the opportunity could be worth as much as $10 million -- more than a Super Bowl ad. However, people with knowledge of the matter told Campaign U.S. the actual number was no where near this high.

The wait is over ?? All will be revealed this Sunday following the Super Bowl ?? Watch it first, only on @hulu. #EggGang #WeGotThis #TalkingEgg

Let’s set a world record together and get the most liked post on Instagram. Beating the current world record held by Kylie Jenner (18 million)! We got this ?? #LikeTheEgg #EggSoldiers #EggGang

The move by Hulu comes after its CMO spoke of major anxiety about cord-cutting among those who believe they’re making a choice between live cable sports and OTT on-demand shows.

Kelly Campbell told a crowd at CES in Las Vegas in January that the brand is pulling apart a ton of data and comparing it with real-time consumer behavior to find out what people really want from their TV experiences.

"A lot of consumers will say, ‘we need cable for sports and news,’" she said. "But what we found is those consumers don’t actually watch sports and news all year long. What they’re really saying is, 'I can’t live without colllege football or March Madness.’ People are coming in and out of live sports."

Its answer to those sitting on the fence of cord-cutting is to provide an opt-in-opt-out subscription to live events.

Hulu’s recent hires of brand lead and chief data officer is a nod to the company’s mission in 2019 and beyond. 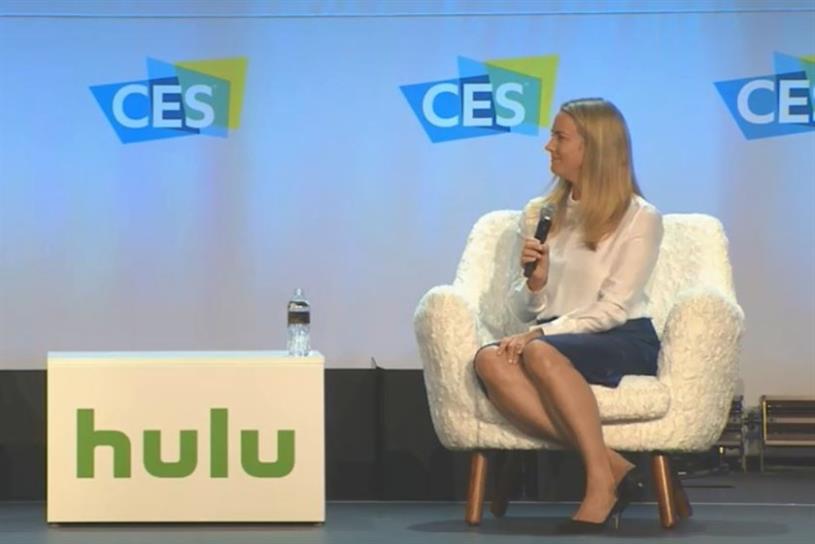 Campbell said the data hire has already reaped a "breakthrough" moment for Hulu.

"What people say they do and want doesn't match what they're actually doing," she said. "The core tenet for this year and next is really understanding what consumers want."

Initial research into anxious cord-cutters by Hulu found that cable loyalists fear quality of live sporting events weaken when viewing them on OTT devices. The company has responded by throwing a ton of time and resources at improving the quality of live events.

The firm is making goliath efforts in brand growth, as well, by tapping into culture. Campbell explained how her team recently dropped Dillion Frances -- a DJ well-known among EDM fans -- into content. He had no lines in the episode he appeared in, but his fanbase exploded over the easter egg. It earned Hulu pickup in publications it wouldn’t normally see the light of day in and opened up access to a whole new fan base.